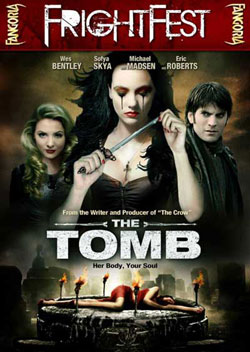 Successful writer and scholar Jonathan Merrick falls under the spell of the irresistible, bewitchingly beautiful Ligeia. She’s fighting a fatal illness and she will stop at nothing to defeat death, her one true enemy. She steals other people’s souls and on her quest to immortality she tricks Jonathan into supporting her work, breaking him apart from his fiancé Rowena and pulling him into her dark, mysterious world. They settle down in an old manor by the Black Sea where Ligeia’s everlasting presence slowly drives Jonathan to madness…

QUICK FIX:
Fairly loosely based on the awesome short story by the immortal Edgar Allan Poe, LIGEIA brings us the story of soon-to-be wed writer and scholar Jonathan, who soon says “Fiancée? What fiancée?” as he slowly falls under the spell of the hauntingly beautiful (read – hotter than doughnut grease) Ligeia. Unfortunately for her, she’s got some fatal illness-type thing and is on her way to taking a permanent dirt nap. But do you think that’s going to stop her? Aw hell naw – she’s bumping people off and stealing their souls on her maddening quest for immortality. Speaking of madness, that’s exactly where she drives Jonathon to the brink of, and exactly where I was close to for the first 65 or so minutes of this flick…

RAMBLINGS:
I’ll be honest – I haven’t read hardly any Poe since high school some 20 years ago. I’m also more of a Lovecraft guy myself, but that’s just a personal preference. However, I still try every chance I get to get my hands on any new movie based on Poe’s works just to see if someone’s going to get it right. In my own personal opinion, I can count on one hand the amount of times that it actually has been done right since Roger Corman struck gold with Vincent Price (including THE TOMB OF LIGEIA) in all those AIP gems from back in the 1960s. Those were, are, and always will be classics to me.

The filmmakers here took an interesting turn with some of the plot points, as is almost always the case with short stories that aren’t going to be part of some anthology film, and apparently decided to infuse everyone with a tad more background, a little more to do, and some fairly lengthy character development. Not a bad thing usually, as long as it’s interesting, well-acted, and never (or at least hardly ever) boring. Unfortunately, that’s not so much the case here more often than not.

Try as I may though, I can’t find a single solitary bad thing to say about Sofya Skya – she’s way beyond beautiful – not only in an almost haunting way, but also on a purely school-boy crush level. In other words, she’s my new crush of the week….maybe even two weeks with this one. I also fully believe that with a few more roles under her belt to hone her craft a little more, this fine young lady will be on the Hot List of actresses to cast in no time flat. Kaitlin Doubleday as doomed fiancée Rowena also brought beauty to my TV screen, and also with time will be an actress to watch for.

I wish I could say more about the dudes in this flick, but I just really can’t find the words to describe how distraught I was at seeing two of my favorite cinematic tough guys – Madsen and Roberts – stuck in this slow-moving drama trying their best to play against type and more than likely stretch their acting muscles, so to speak, in their glorified cameos. To me, it was a waste of two of my favorite actors. Not sure what to say about Wes Bentley either – can he just not find the right role to express his talents, or is he really that wooden and unemotional? Every genre flick I’ve seen him in, playing good guy or bad guy, didn’t matter, from SOUL SURVIVORS to GHOST RIDER to P2 to DOLAN’S CADILLAC, he never seems to be able to shake that Hot Topic employee look and actually have some fun with his roles. Better luck next time, I guess.

LAST WORDS:
What with dragging along too much for my tastes and taking until about the final 20 minutes to really kick in and dive into the true heart of Poe’s story, as well as coming across as more of a Lifetime Channel made-for-TV drama as opposed to horror, I had lost most of my interest in this one early on. This movie tried, I think, even though it didn’t quite get there…so I guess I’ll give it points for that. Poe purists, by all means check it out if you’re curious. For me though, once was enough – just give me more of Sofia Skya in future horror movies is all I ask, and I’ll be a happy guy…