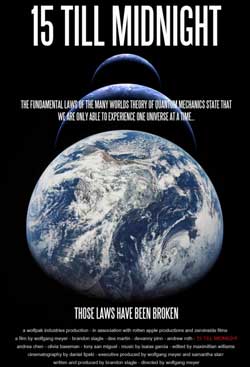 Parallel worlds collide as a secret society policing this phenomena track a man whose wife has seemingly disappeared.

If you’ve felt like you’ve entered into a time warp in the last year, I’m not surprised. There seems to be quite alot of stirring in the quantum physics area…so much that it’s boiled over into film and fantasy. A deja vu, an alternate dimension. a jump back into time or back into forward….I forget how it’s supposed to go, but you’ve not been dreaming. The area, the subject and the concepts of time and displacement have worked their way into film with great success. “15 Till Midnight is the latest effort from the mind of Brandon Slagle directed by Wolfgang Meyer. The film is also produced by Brandon and features him into the role of Lukas Reyes. A few more familiars who you also might have seen before in other features include the lovely Devanny Pinn as Nara and the ever talented and hard working Andrew Roth.

In fact, we probably haven’t reviewed enough of the films these 2 guys are in but your likely to see them showing up everywhere these days with the roster of roles they both have been churning out. So with that said we come upon the intrinsic mind meld of a film titled “15 Till Midnight”. No it’s not so much of a horror film or science fiction as it is a dramatic altered reality play on time and space. We get a foreshadow from intro wife (and also lovely) Andrea Chen who brings us in, in her role as Sera Reyes.

Lukas wakes one day after a romantic anniversary date to find his wife has completely vanished with all her possessions. The incident is further confused as the amount of time it occurred in doesn’t quite add up to the reality of its result. Lukas, depressed and confused gets thru his day but extremely displaced by the event. When he meets Nara, his one night encounter turns into a altered reality of a new reality that claims she has been with him for the last 2 years.

This alone might echo an ode to “Jacobs Ladder” and a few others that come to mind. Though his recent encounters and paranoia of being followed also seem to be closing in on him with an explanation that is going to rock his world. The film goes for an intellectual direction rather than pure fantasy. It also toys with the idea of parallel worlds and potential paths not taken. Certainly this idea is at the heart of string theory and quantum physics scenarios. In fact several books as of late cover this very scenario. Though Slagle has taken it one step further by incorporating it into film.

Andrew Roth works a perfect role as a unassuming villain who even with limited screen time is perfectly effective in delivery and timing. Slagle cements his knack for dramatics and talent for turning on and off emotional sequences from one act to the other. My only complaint which is more technical, is that the music was way too loud during the bar scenes. In fact I think as an audience we just went with the flow and followed the body language more, but it would have been nice to have heard the conversation.

What I truly liked about this film was that it was able to capture the before mentioned idea without need for a huge budget. “The Adjustment Bureau” had a huge budget and suggested some of the same content but “15 Till Midnight” does it effectively without need for cgi tricks and 6 figure actor salaries. “15 Till Midnight ” is a perfect example of independent filmmaking. When the film also happens to incorporate a twisting story that “makes you think”, then it’s a victory and job well done. I thought it was great and suggest you follow suit when this film becomes available.

See Trailer for “15 Till Midnight”