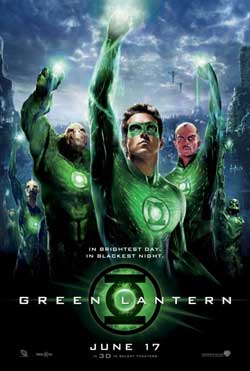 Test pilot Hal Jordan is granted a mystical green ring that bestows him with super powers, as well as membership into an intergalactic squadron whose job it is to battle evil within the universe.

Over the last few days The Black Saint has been hearing nothing but negative comments regarding “Green Lantern“. I begrudge no one their opinions of course but I had high hopes for this one & they were being dashed to the ground & stomped on before I could see it for myself. So I must admit that as I sat in my seat I was feeling like I was getting ready to witness a turkey of epic proportions. As it turns out, it isn’t nearly as bad as you might have heard but it ain’t no “Dark Knight” either. 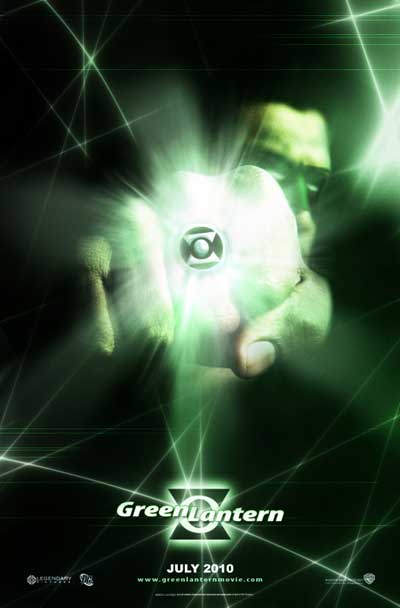 If you aren’t familiar with the character, “Green Lantern” tells the story of test pilot Hal Jordan (Ryan Reynolds). A terribly disorganized individual but an ace pilot. We are introduced to him in the beginning of the film as he gets up (late) & realizes he has to be at a test flight. He quickly abandons the woman in his bed (Letting her know that she can make herself comfortable & have some tap water). He grabs a toy from his table & some newspaper and then hops into his card careening towards the airfield where he is expected to be. As he’s driving, he’s wrapping the toy up in newspaper & narrowly avoids an accident. Eventually he gets to the base & participates in a test of some new unmanned jet fighters that are supposedly impossible to beat in a dogfight. Of course, Hal defeats them both in a most unconventional manner, nearly losing his life in the process. This is to let the audience know that Hal is a unorthodox & quirky type of guy I suppose. Part of the way he defeated the unmanned drone jets involved using his wing man Carol Ferris (Blake Lively) as a decoy. Which didn’t sit well with her or the people running the test. But Hal just did what they asked him to try to do, they didn’t tell him how to do it. But underneath all of the bombast, Hal is a troubled soul. His late father Martin (Jon Tenney) was also an ace pilot & was killed in a horrible explosion in front of Hal when he was a young boy. Deep down, Hal feels like it’s his destiny to die the same way so he lives life recklessly. 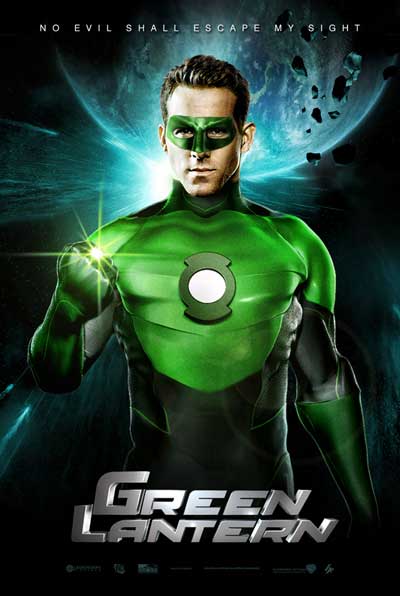 Now I got a little ahead of myself here because the film actually opens in outer space with a ship crashing on a planet & it’s three occupants radioing for a rescue ship. The three occupants are Green Lanterns, who are sort of the “National Guards” of the universe. Battling evil wherever it raises it’s head. There are over 3000 individual Lanterns & all of them are assigned to defend different quadrants of the universe. The unfortunate three who have crash landed picked the worst possible place to do so. There is the ultimate evil waiting for them underneath the surface of the planet & they find it & this ends not only with their demise but with it’s release from it’s underground prison. And it’s angry…very angry indeed.

It’s called “Parallax” & it was imprisoned by who was probably the greatest lantern alive, Abin Sur. Upon it’s escape, it immediately finds Sur & attempts to kill him. Although Sur is mortally wounded he manages to escape & warn the lantern’s base planet, Oa, of Parallax’s escape before crash landing on the nearest occupied planet…Earth. On Earth, Sur’s ring finds the one earthling worthy of wearing his ring…Hal Jordan.

From this point on, the film goes pretty much the way you would expect it to. Hal’s disbelief of the power he now commands, his trip to Oa where he is “Trained” to be a lantern (The training takes up about 5 minutes of the movie), his introduction to all of the other lanterns, especially Toma-Re (Geoffrey Rush), Kilowog (Michael Clarke Duncan) & Sinestro (Mark Strong, giving the best performance in the film) who is extremely disdainful of Hal & his will. Because it is will that powers all the lantern’s rings, Will & fearlessness. Hal seems to have neither, at least to Sinestro. All the while Parallax is rampaging across the universe, reaping the fear out of his victims beings. Parallax feeds on fear & it makes him bigger & stronger. To top it off, he’s headed towards Earth because he knows that Abin Sur’s ring is there being worn by Jordan & he wants to kill Jordan for being Sur’s heir apparent. 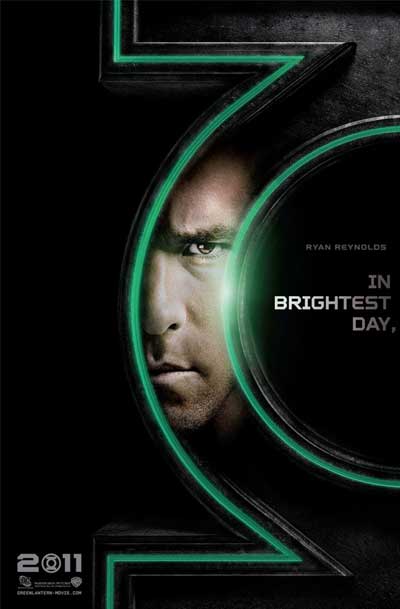 Okay, what’s good about “Green Lantern”? Well, the movie isn’t slow for one. It moves at a brisk clip & is hardly boring. The scenes on Oa are really nice to look at with some fairly nifty CGI effects thrown in. Essentially every scene on Oa featuring the various lanterns are computer generated & they had to look convincing. I thought the CGI artists did a good job here, especially with all of the various lanterns gathering together. There are some cool looking aliens on the planet. Parallax is a pretty awesome looking villain as well. As he grows stronger he gets bigger & sort of morphs into a really grotty looking octopus with lots of tentacles that pulse with red energy underneath their black rocklike skin. His face is especially threatening looking also. He’s a pretty convincing looking villain, I certainly would be scared of him.

What’s bad with “Green Lantern” though? Less than I thought from advance reviews but a lot anyway. The acting for one is spotty at best. Ryan Reynolds surprised me last year with his amazing performance in “Buried” which was basically a one man show. But here it seems he’s reverted to his “Van Wilder” ways. He plays Jordan as a hot dog with no regard for rules of any kind who is eventually humbled by what he discovers to be his destiny. How many times have we seen this before? Too many. Blake Lively actually gives a pretty good performance as the eye candy in the film, but that’s all she is in the end…eye candy. I find it interesting that as these Superhero films get bigger, better actors perform in them. I don’t know if it’s for a beefier paycheck or if it’s the “Thing to do” in Hollywood now, but this one has no less than two Oscar nominees in it & one Golden globe nominee as well. Tim Robbins, Angela Bassett & Peter Sarsgaard all play fairly significant roles. Especially Sarsgaard, who plays Hector Hammond, the scientist picked to examine the corpse of Abin Sur. He is infected by a drop of Parallax’s blood during his examination of the corpse & he mutates into something that looks a lot like John Hurt did in “The Elephant Man”. His character is actually fairly interesting but ends up being of little importance to the story.

I laughed out loud at certain sequences of the film that weren’t supposed to be funny. There is one scene during the final confrontation between Hal & Hector, where Hector professes his love for Carol but was rebuffed because of his looks. Hal takes his ring off to revert back to what he looks like without the lantern costume on & guess what? He still looks like Ryan Reynolds (Who is irritatingly handsome)! He does this to try & convince Hector that without the ring he’s just a normal guy. Really? He’s f*cking Ryan Reynolds!! The Black Saint is secure in his manhood mind you but this f*cking guy is gorgeous! To think that by going back to his old self while Hector looks like the f*cking Elephant Man was a ridiculous scene. And to think It took four people to write this script? Wowzers…Bassett & Robbins basically just recite their lines & get their paychecks. If there is a sequel, there is a role in it for Bassett I suppose but Robbins won’t be there. 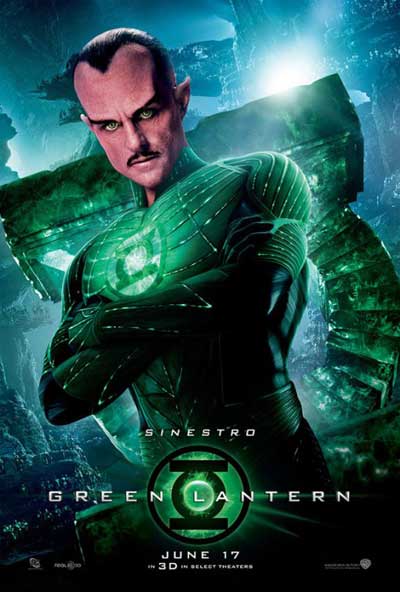 The final confrontation between Jordan & Parallax is also lacking in adequate action. When the two finally meet on Earth I felt there was going to be a much bigger battle than actually occurred & it ended way too quickly & easily with Parallax being lured into a trap that any intelligent being could see coming a light year away. It looked good though, so I guess that counts for something. I wish there was more of a final conflict between the two. In the end, Hal saves the Earth & garners the respect of Sinestro & the Lantern Corps. for single handedly defeating Parallax & Carol understands that Hal has certain priorities that he has to attend to but he’ll be back for her soon enough. And that’s pretty much it. He flies off & recites that silly oath that they all have to utter at one point or another throughout the film.

“Green Lantern” is far from a bad movie but it isn’t an especially good one either. It’s an okay time waster at best. What bothered me the most was that most of the best scenes are featured in the trailer for the movie & since there actually aren’t that many action scenes in it, I felt like I’d seen most of the movie already. But it isn’t as bad as you might have heard it was. The Black Saint rates it 2 1/2 shrouds out of 5. I’ve seen far worse….seen far better. This one sits squarely in the middle of the Superhero film pantheon. If you’re interested in this type of film then you probably won’t be too upset with it. By the way, there is an little extra scene midway through the end credit sequence setting up a sequel so hang around for that.