Military Horror from Singapore in ‘23:59hrs’ 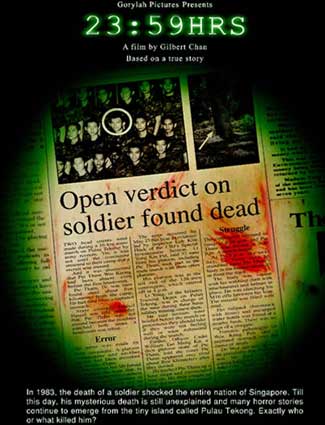 In Singapore the term ‘23:59hrs’ is used to refer to the most terrifying time of the night. In the final minute before one day shifts to the other terrifying phenomena are said to occur. The scenes portrayed in the film are said to be based on real events that happened in 1983 involving the deaths of several recruits at an army barracks. The movie is currently filming in Singapore at an army barrack in Pulau Tekong. The film will be directed by Gilbert Chan, and is anticipated for release sometime in 2011.

Synopsis:
“There is a legend in the army camp that at the exact hour of 23:59 hours, a woman dressed in white will enter the bunk house. She will pick out a soldier and stand beside his bed, waiting for him to open his eyes. When he does so and stares into her hollow eyes, she will drag him away, bringing him back with her into hell. In 1983, an incident happened in Singapore that shocked the entire nation. A recruit was found dead during a road march and all his internal organs were ripped out of his body and laid beside it. After the death of the recruit, stange things started to happen in the bunk, leading to speculation that the woman in white was responsible. A third door, on recommendation of a medium, was built in the bunk room for the spirit to leave. After the third door is built, life seems to return to normal until one night when another recruit dies in a bizarre fashion at the medical center. The new death throws the camp in turmoil as the officer and recruits face a race against time to find out the truth.