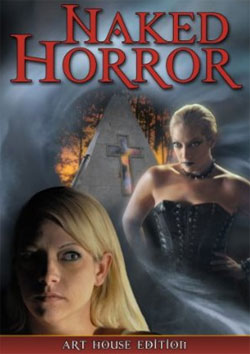 Terror lurks in the dreams of a young woman who discovers that she is connected to the supernatural world through her psychic nightmares. Once she realizes that her dreams are not just her imagination gone wild but represent a real threat, she vows to fight the supernatural force terrorizing her.

Web blogs are a form of communication between people around the globe that can find similar interests when no one is like them in their own community. One is able to use their own webcam to video tape themselves talking, and broadcast it to millions that log onto a website 24 hours a day 7 days a week. In the film “Naked Horror” by Carlo Rodriguez, a young woman finds solstice in a website that broadcasts video blogs of fellow nightmare sufferers that leads to distress and despair.

Priya(Angela Tropea) is a beautiful young woman that suffers from nightmares that start occurring after she impulsively buys a DVD off a man at an estate sale. Her nightmares, containing religious symbolism and female sexual deviants, terrify Priya sending her into alcoholic binges and troublesome living conditions. Her relief is found when she logs onto a website entitled “Naked Horror” in which other people with the same nightmares log in and tell their tales.

Amongst the web blog videos, the webmaster known by his screen name dogwillhunt(Bill Johnson), is the most knowledgeable about the happenings and keeps composure during his web videos. Two females that join Priya are Kate, know by screen name torontotmink(Sandy Kellerman, and Shelby, known by the screen name texastwang(Debbie Golden.) Both women are hysterical in their problems with the horrid nightmares, and use alcohol to calm their terrors. The last male that videotapes himself in a blog fashion is Lloyd, otherwise known as tromafan(Lloyd Kaufman), whom is lively in his descriptions of his nightmares, as posters for Troma hang in the background in numbers.

Even though the video blog members of the “Naked Horror” webpage explain the same predicaments that Priya is encountering, she is prone to committing the same things that the video bloggers explain. From suicide attempts to endless drinking, Priya cannot find a way to rid herself from her violent night terrors. Her end decision sends her on a journey to solve the mystery behind the DVD’s initial beginnings, and provides for a gradual conclusion of her being overtaken by the creatures that haunt her from her dreams.

“Naked Horror’s” website promotes the movie by naming off some of the horror legends that make an appearance in the movie, such as Bill Johnson of Texas Chainsaw Massacre 2 fame and Lloyd Kaufman the prolific Troma director. Priya’s character spends most of the movie semi-nude, showing off her breasts while lounging around her home in recovery from her horrible nightmares. In her nightmares, there are more young nude women, which are indulging to the male horror viewers. There are plenty of breast and crotch shots that show off the slender bodies of the actresses picked in the movie. The religious symbolism in the movie is confusing, and leaves the viewer wondering why there are crucifixion scenes of old men with no real meaning.

Carlo Rodriguez’s “Naked Horror” is a nudity filled horror film that entrances the viewer with horrific nightmares filled with religious symbolism and beautiful female demons. The beautiful star of the film, Priya, is caught in a ravenous fit of despair when she watches a disturbing film she found at an estate sale, and finds refuge on a webpage that has members that encountered the same problem. With female nudity and plenty of weird moments, “Naked Horror” is a must see for fans in the disturbing, sexually provocative movie genre.