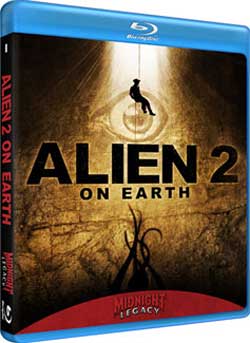 Ultra-low budget and very violent rip-off of “Alien”. A space module lands back to Earth after a failed mission, but the astronauts have been replaced by hideous creatures that can penetrate into people’s bodies and make them explode. A group of speleologists are attacked by the monsters inside an underground cave, but the survivors are in for a surprise when they finally manage to escape the trap

I remember watching The Descent and afterwards thinking that maybe going into caves isn’t exactly the brightest thing to do. My dad used to go spelunking when he was young but there were never any cool stories to tell. I guess nothing exciting really ever happened. Kind of like this movie. It has a slow build up which would be okay if it was building up to something awesome. Sure there are some gruesome deaths and one absolutely brilliant one involving a decapitation but the pacing up to them just drains the film of any true momentum.

Alien 2: On Earth is an Italian horror movie that came out in 1980. It was low budget to say the least and, no real surprise, trying to cash in on Ridley Scott’s Alien. Think The Asylum of today’s knock-offs and you get a pretty good idea of the overall quality you’re going to get if you watch this.

The movie opens with some stock footage of a space mission. Ships are in the Pacific waiting for the capsule to splash down. Problem is the astronauts seem to have gone missing. Just what exactly may have gone wrong is never really explored but clearly something is amiss. Cut to a television studio where Thelma, a beautiful speleologist (cave scientist), is being interviewed about her various explorations of caves. Everything is going fine until she comes down with what appears to be a migraine. The interview is cut short and her boyfriend promptly whisks her away.

Feeling somewhat better they meet a bunch of fellow cavers and scientists at a bowling alley. What could have been a fun scene to do some character building doesn’t really do anything but tell us that one, there are going to be some boring scenes in this movie and two, one of the characters likes to hustle people for big money at the bowling alley.

From here they make their way back to a cave they explored earlier but found that it was too large to do it all in one trip. On the way they make a pit stop at a gas station where they put on their gear and get some last minute supplies. One of them happens upon a very strange and cool looking rock. Thinking nothing much of it, he picks it up and in the car presents it as a gift to Thelma. In the history of gift giving, this probably ranks as one of the worst. Let’s just say that this is one of those gifts that just keeps on killing.

Alien 2: On Earth is one of those movies that might be okay to watch on the SyFy channel on a lazy Saturday afternoon. It’s a B-movie all the way and while that is usually a good thing in the realm of horror, poor pacing just does this film in. The plot is pretty straightforward but no surprise here as this is a knock off meant to make some quick dough. I do admit I didn’t expect the ending to turn out like it did so bonus points for that.

There is plenty of blood to be found despite the kills all being kind of the same. You never get a really good look at the aliens due more to the fact of this being a low budget movie. One thing is for sure though, they love to burst out of their victims and send the survivors screaming in all directions. For some reason seeing that just never gets old.

Alien 2: On Earth is not a movie that I can really recommend. If you are a fan of Italian horror than it would be worth a rental and maybe also for fans of foreign horror in general but I have to warn about the slow pacing. It’s a shame that once the action gets going the tension just never seems to hold. This movie could have been pretty good but aside from some awesome kills, there just isn’t much here.