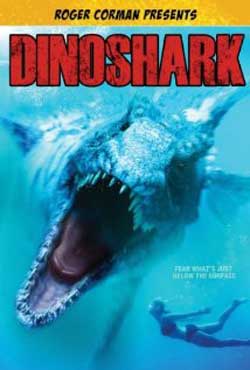 Frozen in the ice for millennia the Dinoshark has thawed out and he’s hungry. Now he patrols the coast of a Mexican resort for his next meal, feeding on the unsuspecting vacationers who can have no idea that a prehistoric feeding machine is in the water with them. His speed: unfathomable. His tenacity: unforeseen. His appetite: insatiable. Will the few locals that truly understand what they’re dealing with be able convince the skeptics that he’s out there and put a stop to his feeding frenzy?

The SyFy Channel has finally done it. They have made the perfect cheesy horror film that they, insofar as the ones that I have been charged to watch and review, have been trying to create but, until now, have been unable to accomplish. At the risk of sounding like a broken record, SyFy channel movies all have one major thing in common: they’re awful. The acting is usually not very good (not always), the CGI is painfully underdeveloped (which is frustrating as the CGI in the advertisements for the channel itself are always really cool), and ultimately the story ids just silly. Dinoshark is no different. 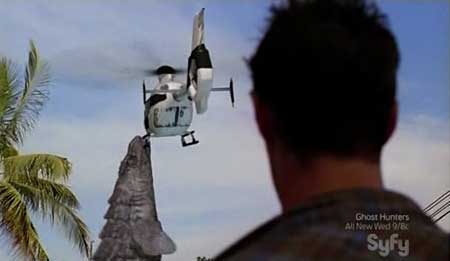 However, there is something about a movie that understands what it is and doesn’t try to be anything more. Dinoshark succeeds where the others fail because it doesn’t take itself too seriously. Like ‘Snakes on a Plane’ (2006) or even ‘Piranha 3D’ (2010), Dinoshark knows at the outset that what it’s trying to sell is ridiculous and never tries to dress it up as anything else. With Producer Roger Corman’s almost 400 movie-production credits in his belt, including recent fare such as Jason Statham’s ‘Death Race’ in 2008, and going back as far as 1960 with Jack Nicholson’s ‘Little Shop of Horrors’, there is no doubt that this project was helmed by someone who had the chops to produce something that’s fun to watch. And it is. 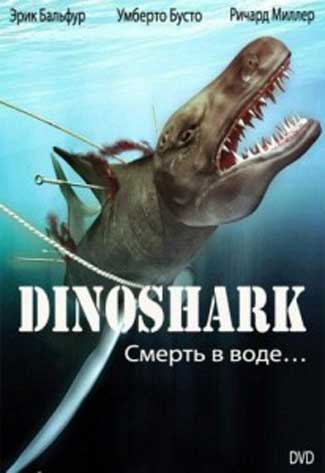 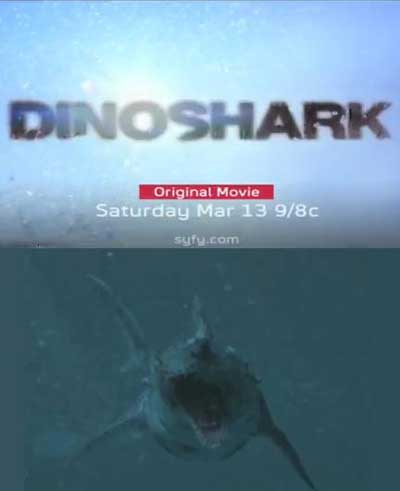 The “dinoshark” itself doesn’t even look like a shark. It looks like a cross between a crocodile (no surprise here; Corman’s other film credits include ‘Carnosaur 1, 2 and 3’ as well as ‘Dinocroc’ and ‘Dinocroc vs. Supergator’) and a plesiosaur but with no neck. Everyone who is from the Mexican resort town (Puerto Vallarta maybe?) that is the setting curiously has no accent or dialect whatsoever…accept, like Alex Trebek of Jeopardy, when they are saying a Spanish word.

Then they sound as though they have never spoken any other language but Spanish. Continuity problems abound: a scene where the not-unattractive Iva Hasperger is talking on a cell phone while driving shows her in the rear-view mirror clearly NOT speaking and NOT on the phone at all. And finally, the ominous theme music is shamelessly none other than the “duuuuuuuh dun” from a well-known shark movie made by Stephen Spielberg in 1975. It may not be exactly the same, but it’s akin to when a television commercial will change a single note of a Metallica tune so as not to infringe on copyright. 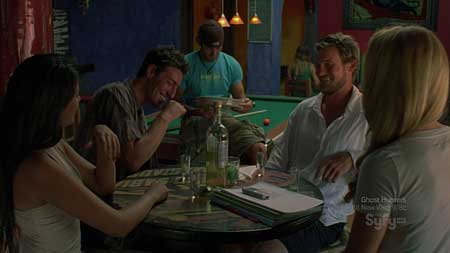 None of that matters though. Dinoshark is a good time as soon as the dinoshark makes a kill. It’s so freaking fast, and wonderfully brutal, and as my lovely lady points out, it never seems to NOT be hungry. Maybe being frozen in the ice for so long gives you a tapeworm. There you go, Mr. Corman, you can have it. Your next awesomely awful movie: “Dinoshark vs. Tapewormosau