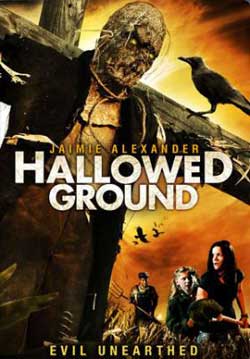 After she becomes stranded in a small town, a young woman discovers her arrival there was foretold a century earlier by the town’s founding preacher and that she is an integral part of his impending – and terrifying – rebirth.

Hallowed Ground is a film that makes you automatically think of Children of the Corn with all those cornstalks and weird overtly religious people. Liz Chambers is driving down the deserted highway in her little blue car obviously deep in thought until she decides to turn on the radio. A preacher blasts out of her speakers spouting off about some sermon and she quickly shuts it off. Suddenly her ride starts to shake violently and she realizes she needs gas.

Pulling into the gas station she gets out and intends on finding someone to help her out. Walking up she notices a little girl in the car with her mother as the father is getting directions. The little girls waves with her dolls hand and Liz gets a little creeped out. After finding out that her car needs to be fixed and they don’t carry the part she heads across the street to the diner to get something to eat. As soon as she opens the door everyone inside turns and stares at her leaving her feeling awkward.

A blonde woman comes over to her table and sits down informing her that she is Sarah Austin and she is there to cover a story. She fills Liz in on the towns history where a priest would sacrifice the town’s sinners by nailing them up in the fields to a wooden cross. The crops were always plentiful when he did this. So Sarah convinces her to go out to the fields and preachers house to see if they can find anything interesting. This part seemed to be inspired some from The Birds as crows lay dead on the ground and hovering around them.

They make a scarecrow and hang it up on the wooden cross so Sarah can take some pictures for her paper. She gets a thoroughly creepy head that they made her bring and places it on top and the crows that were lingering around jet off in fright. This is where it starts to get a tad bit corny when the dead preachers spirit gets into the scarecrow and kills Sarah. There is a nice chase scene between him and Liz that leaves plenty of carnage and dead bodies.

Now Liz is running for her life as a cat and mouse game ensues with her and the scarecrow. These chase scenes were the only thing that really made your pulse quicken a notch or too. But the film was very predictable and didn’t hold any twists or real scares. I am not saying it’s a bad film because I have seen worse, it just seemed a little generic and reminiscent of other movies I have viewed. You might wonder for a bit Liz will get herself out of this mess but deep down you already know the answer. While she is running thru the cornfield she bumps into the little girl Sabrina from the gas station.

Her family was killed and she is hiding from the towns people and preacher. Now the preacher keeps switching thru different bodies but he needs Liz to become pregnant to carry a child so that he can be reborn from it. The whole idea was ridiculous to me. Would he inhabit the body and grow yearly until he is the right age? Or would he be in the baby’s body already as the nasty person he already is running around as an infant looking like Chucky or something? It was just a way out there confusing concept for us viewers to embrace.

Now you watch and know that Liz is going to be responsible for Sabrina’s welfare since her family was already made into scarecrows to be sacrificed for the sake of the towns crops. Do you want to sit thru this movie when you can already guess what’s going to happen before it actually does? Well that’s up to you. If you have ever seen Children of the Corn you might as well skip it since it’s very similar, well with all that corn it is anyway! 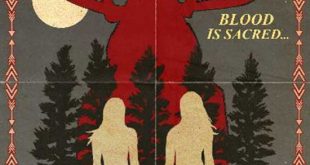 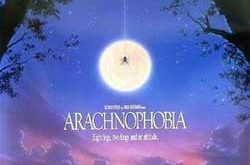