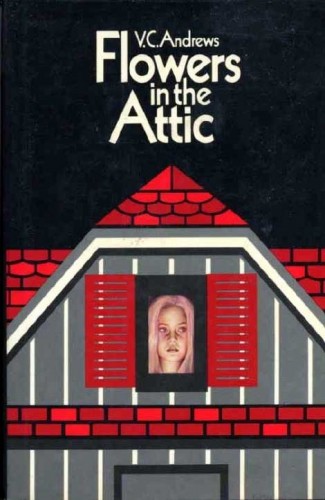 Although she passed away in December 1986, Virginia Andrews‘ name lives on as one of the world’s biggest selling novelists, with over seventy million copies of her books and stories in print. Often described inaccurately as horror novels, her tales reveal the dark side of human nature, mixing Dickensian motivations with Gothic melodrama to create a hybrid fiction that has kept her worldwide audience (both male and female) on tenterhooks throughout her relatively brief career. Flowers In The Attic, based on a true story, was her first novel and became an immediate best-seller. Published in 1979, it received tremendous acclaim on both sides of the Atlantic. It was followed by three more books about the Dollenganger family – Petals On The Wind (1980), If There Be Thorns (1981), and Garden Of Shadows (1986), the prequel to Flowers In The Attic. All these novels explore, among other things, aspects of child abuse and incest. 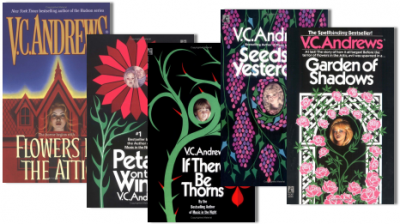 The Dollengangers are a bright, happy, one-parent family until mother decides to move them all to her parents home. There she locks her offspring in the attic because her father does not like children, indeed, he does not even know that she has four blond beauties. The children initially spend most of their time decorating the attic to make it less scary. They turn it into their own paper-made garden with flowers and animals. Their mother’s abandonment forces the children to rely on one another for comfort and friendship. This leads to the formation of a new family unit among the children themselves. While the grandmother mistreats the little darlings, their mother finds a new beau and makes plans to marry him. But the surviving children have their revenge at the wedding. The second and third Dollenganger books document a cycle of abuse which most child psychologists would recognise as the sins of the father – or in this case mother – being visited upon the sons.

The books were much disputed when the series was said to be based on a true story. For many years there was no evidence to support this claim and the book was passed off as fiction until the official Virginia Andrews website made contact with one of Virginia’s relatives who claimed “Flowers In The Attic was based on a true story. Virginia was a young lady when my dad made arrangements to take Virginia to the University of Virginia hospital for treatment. While she was there, she developed a crush on her young doctor. He and his siblings had been locked away in the attic for over six years to preserve the family wealth. Obviously she cut the time back in her novel to be more believable. That area of the country has a lot of very wealthy people. I do not know who they were.”

So popular were these books that New World Pictures picked up the rights to Flowers In The Attic and transformed it into a 1988 film version starring Victoria Tennant. At one point Wes Craven was scheduled to direct the film, and he even completed a screenplay draft. Producers were disturbed by his approach to the incest-laden story, however, and Jeffrey Bloom ended up with writing and directing duties. The movie bombed at the box-office, probably because of its over-the-top adaptation. It was, however, one of New World’s greatest successes on video.

Andrews’ next series, a rags-to-riches multi-generational saga charting the life of Heaven Casteel and her family, began with Heaven in 1985 and continued with Dark Angel, Fallen Hearts and Gates Of Paradise. Her final novel, Web Of Dreams, was published by Collins in 1990. These last three novels were completed by a ghost-writer, occasional horror author Andrew Neiderman, who wrote many more stories published under her name. In assessing a deficiency in Andrews’ estate tax returns, the Internal Revenue Service argued (successfully) that Andrews’ name was a valuable commercial asset, the value of which should be included in her gross estate. 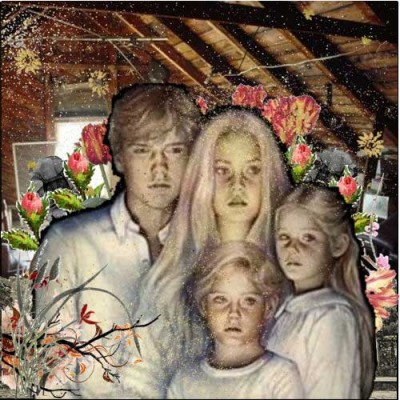 Although there are now more than seventy stories and novels credited to Virginia Andrews, all but the first eight were ghost-written by Neiderman. It is a strange fact that few of her fans realise she is long dead, but fortunately, like Agatha Christie, Ian Fleming and Frank Herbert, her books are likely to fill the bookshelves for some time to come. And it’s on that note I’ll bid you a good night and look forward to your company next week when I have the opportunity to put goose-bumps on your goose-bumps with more ambient atmosphere so thick and chumpy you could carve it with a chainsaw, in yet another pants-filling fright-night for…Horror News! Toodles!