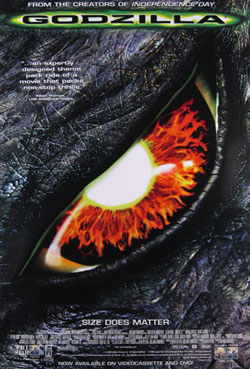 When a freighter is viciously attacked in the Pacific Ocean, a team of experts — including biologist Niko Tatopoulos (Matthew Broderick) and scientists Elsie Chapman (Vicki Lewis) and Mendel Craven (Malcolm Danare) — concludes that an oversized reptile is the culprit. Before long, the giant lizard is loose in Manhattan, destroying everything within its reach. The team chases the monster to Madison Square Garden, where a brutal battle ensues.

Godzilla! Even the name commands attention. Once upon a time when movies were still made with rubber suits and miniature sets that one could step on to simulate immense destruction came the king of all lizards…Godzilla. Well not too long ago, 1998 to be exact…. the world was introduced to the modern day Godzilla…and to be perfectly frank alot cooler, larger and faster. It was only a mater of time I suppose, but I loved the idea and loved the trailers even more.

Man, when those teaser came on in movie theaters I don’t think anyone wasn’t marking that premier day on their calendars. It almost reminded me of an old lemonade commercial with the 2 guys fishing. Any-how…. the world was anticipating the new Godzilla which was actually coming off of the heels of the successful franchise of Jurassic Park. Folks were digging there large dinosaur lizards. Godzilla arrived and of course received mixed reviews. Portions that mattered were exciting and somehow I believe maybe they just chose the wrong acting talent for the main character roles.

Matthew Broderick played Dr. Dr. Niko Tatopoulos who kind of gave the impression that he’s not really on board all the way as an engaged actor. His role is the scientist who studies worms left over from nuclear activity. Of course with the Chernobyl intro we know that Godzilla is born from nuclear fallout and an odd combination of nature. The origin makes sense and is maybe talked about a bit too much past the fact that we get it. The military is bubbling, the french legion is a bit to covert than reality would allow and the inner story is weak.

Audrey Timmonds a former girlfriend of Tatopoulos from 8 years back is out to make a name as a reporter. Up to now she has failed and wants to use her connection to Tatopoulos as a lever to get her noticed. An old romance of course sparks somewhat of a new one. Meanwhile the city is in panic, buildings fall, and powerful men scratch there heads with solution like baiting the street with fish. Jean Reno is great in his role as Philippe Roaché a French secret service agent and Hank Azaria plays a great loose cannon supporting role.

The music score was excellent and mammoth sounding. Though something about it and the length of the movie tends to put you in nod off mode more than anything. There is both pros and cons to the Godzilla production. I’ll talk about the pros first.

Great first act! The buildup echo’s Hollywood productions with the same style and tension sequences that we are so accustomed to as viewers. The appearance of Godzilla is given in steps that allow us to engage more thoroughly as he makes his presence known. Even the intro has some classic retro styling’s in it that pasy a slight homeage to original Godzilla. The /FX work which was helmed by Patrick Tatopoulos Designs is right in leagues with any major Hollywood production out there. Godzilla is believable, big and fun to watch.

Now the cons. the movie which clocks in at 2 hours and 15 minutes isway too long for a movie of this type. For one, there isn’t enough story or substance to justify keeping the audiences engaged that long, so towards 3rd act, the viewers fade and start looking at there watches. 90 minutes could of compressed the finer points and saved us alot of time. The premise is inherently weak as the once we get past Godzilla invading the city, it’s too much planning, waiting, testing and talking about how to get him out.

There is never any other elements introduced that warrant the movie length. Once you’ve gotten past the detection of building and military aiding in that destruction then you start looking for the stories within. The onscreen relationship between Audrey Timmonds and Dr. Niko Tatopoulos feels more like puppy love than a source of premise building plots. Plus add to the fact that Broderick just isn’t believable as a isn’t or action hero of any sort which this film clearly needed. Actress Maria Pitillo is cute but never alluring. At best the 2 feel more like sidekicks that never really get there chance that a scene stealing lead. This leaves alot of empty substance that surrounds a giant lizard that hides inside a building.

Godzilla has just arrived on Blue Ray disc, which I am recommending just for the sheer visual aspects of seeing the magnificently done Godzilla on screen. There are movies that deserve to be seen in better resolution and Godzilla is one of them. For story aspects, your gonna have to humor yourself and maybe flip thru a few parts that slow the pace. Godzilla, I still love him….just maybe in a better script and company next time. 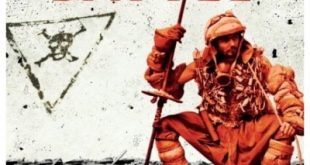