‘Insidious’ scares all with soaring box office numbers to boot

Well after seeing it for myself, there is no question that this film isn’t the one to see this weekend for horror fans the world over. James Wan and company have checked all the movie making marks with flying colors in bringing a new and welcome entry into the horror genre hall of fame.  With previous films like Paranormal Activity leading the scare revolution, its good to see an actual film that works on the fright level that doesnt involve hand held cameras or reality style content. Insidious is damn scary ghost film that weaves itself creatively around a interesting premise that provides more than one jump moment for viewers. 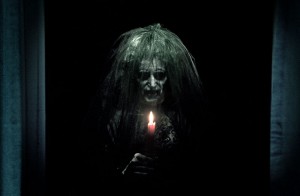 With reports coming in that the film pulled in $5 million just yesterday alone, this $1 million film is sure to make its studio happy with box office returns soaring. Those who were fans of Wan’s film SAW, will welcome a new horror entry that places its emphasis more on scares and creepiness. Don’t Worry, this scary face promo image doesnt give things away, theres alot more in store waiting in dark places! Also if you missed it you’ll want to hop on over to last weekends Insidious podcasts with some of the film’s talent