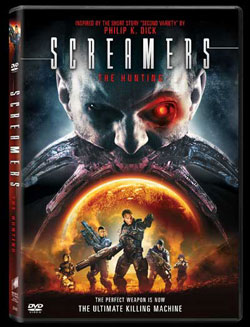 In this sci-fi thriller based on a Philip K. Dick story, a team of rescuers from Earth responds to an SOS from an abandoned planet only to find a motley crew of human survivors eking out an existence there. But are these humans really human, or have the Screamers — the robotic killers that destroyed the other human inhabitants — simply morphed into human form to carry out an even more sinister mission? Lance Henriksen and Gina Holden co-star.

I’m guessing most of you don’t remember the original film that starred Peter Weller, back in 1995. Though if you do, you’ll remember it was a pretty decent flick. So now 14 years later the fillm makers decided to get around to a sequel. Well the word is, this is a pretty damn cool film. The “Screamers” films are a perfect combination of sci fi and horror. The horror lies in the deadly machines themselves that’s sole mission is to destroy. Screamers is the name given to the machines due to the high pitched sound they emit when approaching in attack mode. The original pro types are burrowing circular objects that approach underground at high velocities to fly out and attack there targets.

Screamers are equipped with flying circular saw blades that retract out and chop through everything in their path which make them pretty proficient killing machines deigned by the military for combat. The problem is they have progressed to the point of being able to reproduce themselves out of machine parts. Ya, I didn’t get that part either but it sounded good. Though stay with me and suspend disbelief for a second. There appears to be variations of these machines that have self produced themselves and advanced on there own. Some of them look like metallic scorpion tails that lurk about and others in which you’ll soon find out have evolved into human-like clones. As they state in the film “we have evolved. “

These killing machines seem to be primarily located on a barren abandoned planet where the military could perform testing. The Earth wants to destroy the planet and be done with them. However a rescue mission has been dispatched to answer a distress call that was received comign from the planet. The ship Sirious 6B is the vessel and team that travels to investigate.

The remaining survivors on the planet have acclimated themselves to their world and live in constant battle and awareness from the Screamer robots. The primary focus of the film is to rescue, investigate and get off the plant before it is wiped out by a Earth induced nuclear storm. Simple enough, though the screamers give them a run for there money with some pretty brutal attacks beforehand.

Lance Henriksen appears in a smaller but effective role as the one of the Screamers original designers. Highlights are provided by actress Gina Holden and Jana Pallaske who is actually quite beautiful but scrums it up for her character role.

For former Screamer fans, we get to see how and where the original pro types were created. You might remember from the original that not alot was disclosed on these attack machines, so the film provides a pretty decent prologue. This idea is further elaborated in the film’s finale.

You all remember the flying balls from “Phantasm”? These are sort of like them with meaner blades and what seems like a temper??? In attack mode they basically slice thru humans like butter. Arms, heads, stomachs….it doesn’t matter as they strike to kill with the purpose of killing off there targets. The only way to take them out is by shooting them mid air when they launch from there underground burrows. We assume a certain intelligence in the models even though they are machines with a mission. Advanced pro types prove this idea on a much higher level of evolvement.

Now my favorite portion of this film was the ruthless human body killing machines. They have a bit if that mouthy thing from the “Blade” series and electronic parts from “Virus”. Essentially they can open there faces and others parts to expose saw blades and killing instruments at command to kill anything they choose. Flashbacks of Hellraiser films might come to mind in watching. The Fx in this film were outstanding and the creature work was some of the best I’m seen in a while. There’s enough chopping, carnage and gore to satisfy horror fans besides the fact that these are pretty awesome looking villains.

I for one have gained new interest in seeing this become a series of films that explore more of these screamer characters. The film itself is original enough to warrant a new audience that wants more sci-fi horror combos served to them. Directed by Sheldon Wilson, I think this ranks as a great new film to come out of Sony. Brutally enjoyable and a winner all the way!