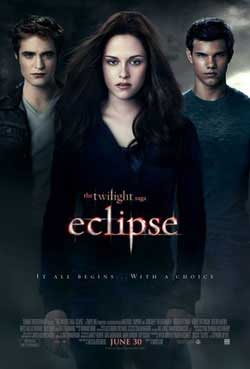 As Seattle is ravaged by a string of mysterious killings and a malicious vampire continues her quest for revenge, Bella once again finds herself surrounded by danger. In the midst of it all, she is
forced to choose between her love for Edward and her friendship with Jacob — knowing that her decision has the potential to ignite the ageless struggle between vampire and werewolf. With her graduation quickly approaching, Bella has one more decision to make: mortal or vampire.

Well, I’m pleased to say that “Eclipse” was actually better than “New Moon”. Despite most people telling me that none of the Twilight films belong in the horror genre even though they have vampires and werewolves in them, I can now say for sure that they do. Yes, this is a horror movie, rather than a horrible movie, with a teenage love triangle at the heart of it all and I’ll tell you why. It has a full on “werewolves versus vampires” war in it! War is horror, death is horror, and giant CGI werewolves ripping pretty teenage vampires to pieces is horror!

So it probably won’t go into anybody over the age of thirteen’s top ten movies but this was a pretty decent offering for the intended audience. Even those of us who it wasn’t really intended for can tune out of the awful soap opera dialogue and revel in the beauty of Rosalie (Nikki Reed) and Alice (Ashley Greene). I think we are all over Bella now even though Kristen Stewart was great as Joan Jett in “The Runaways” recently too.

I really don’t care what women think of the boys in the film since I’m not wired that way. I am, however, glad that, even though the werewolves still seem incapable of owning a shirt when they are together, nobody has to see Jacob’s chest or abs until well over an hour into the film. If that’s all you want to see then I suggest arriving late.

None of them apart from Bella’s father can actually act, of course, and there’s still very little chemistry between any of them especially in the love triangle itself. Edward (Robert Pattinson) still looks miserable most of the time and Jacob (Taylor Lautner) just seems to be angry. I would probably be angry too if I’d chosen such a totally awful girl as Bella to be in love with rather than one of the pretty vampiresses. She’s still hardly the kind of girl that most people would go for and so I suppose it’s only fair that two supernatural monsters are the only ones competing for her attention.

Once again Bella is all confused about who she loves most and it’s all talk and/or glib comments for nearly an hour. There are a couple of flashback stories for some of the seemingly unimportant characters at this point (just to vainly try to put Bella off wanting to be a vampire herself for five minutes) plus a couple of moments where Edward and Jacob stand really close to each other angrily. The camera stands even closer to everybody though as I don’t think I’ve ever seen so many
headshots and close-ups since the last Clearasil advert I saw on TV.

But then things start getting good. No, I don’t mean Jacob getting punched in the face when he tries to kiss Bella. Yes, that does happen and I did enjoy it. The Volturi bit part players have turned up and the gang of newborns is homing in on Bella so you just know that big trouble is about to kick off left, right and centre… or as many camera angles, slow-mos and quick cuts as the director, David Slade, can work in.

Of course, before any of this happens, we just have to have one of the most embarrassing and non-erotic teenage fumbles on a bed ever filmed. Nothing really happens of course because Edward wants to wait until they are married even though Bella wants to be diddled before she becomes a vampire. How sweet yet very lame. Better to keep on begging Bella to marry him while the werewolf keeps pushing himself on her too than to give her the good seeing to that she needs. The kiss between the evil vampiress Victoria and whoever the other guy was (Riley?) a few minutes later was twenty times hotter and lasted all of a few seconds.

I probably should also mention the 20 minute three-in-a-tent scene where Edward had to call a still shirtless Jacob in because he didn’t have any body heat to keep Bella warm. Yeah, that was his excuse. It all turned into a bit too much of a male bonding session for my liking. Oh, if only this had been an adult film! It did remind me of that really bad “Blair Witch Project” p*rn parody even down to Bella’s woolly hat but I digressed. Yes, once again Edward’s idea of keeping Bella safe is to take her where it’s most dangerous, on top of a freezing cold snowy mountain. No wonder she decides to give Jacob a proper snog before he goes off trying to kill himself in battle because she agreed to marry the vampire after all.

But, yes, it’s all out war from then on. Cullens, werewolves, bad vamps and Uncle Tom Cobbly all run at each other swiping heads off, biting, clawing, pulling off arms and breaking necks. For a PG-rated film this was pretty good!!!

Aw, but I’m giving away the plot. It’s not as if you are going to see this anyway since you are reading this review on a horror film blog. Suffice it to say that the final battle between Edward and Victoria is good but nothing to lose your head over. It is amusing how the vampires seem to be made of bone china though and the only blood involved is Bella’s.

Jacob manages to get himself injured in another epic CGI werewolf battle and, since there’s nothing like kicking a big smelly dog when he’s had his back broken and is down, Bella tells him that she has
finally chosen Edward over him. There I just saved you $10.

Everything ends with a scene that mirrors the start but now there’s a promise of a wedding and some hanky panky to look forward to next time.

So there you have it. Did five minutes of brutal horror action justifynearly two hours of boring teenagers angsting over who they fancied? Well, if you use the same ratio of soap opera to violence that “Wolf Creek” used to qualify as a horror film then yes.

I’m standing by my original statement. “Eclipse” is a horror movie. Not a very horrific horror movie I grant you but it does belong in the genre.