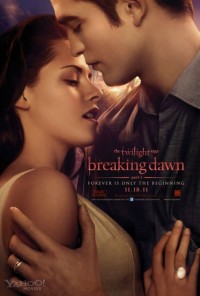 The Quileute and the Volturi close in on expecting parents Edward and Bella, whose unborn child poses different threats to the wolf pack and vampire coven.

Film fans from all around the world are now familiar with the term ‘Twilight’ and it always manages to spark a heated debate, both for and against it. It has often been dubbed a ‘marmite’ franchise – either you love it or you hate it. Say what you will about it though, the franchise has broken many records and has made literally billions of dollars! Impressive, or what? It seems that people just can’t get enough of this complicated love story (between the now globally famous Kristen Stewart, Robert Pattinson and Taylor Lautner), and so here we have the fourth instalment that everybody’s been waiting for.

I personally feel like this particular part of the story doesn’t really have much substance to it (and I am aware that it is based on a book, but not having read it, I don’t feel I can comment on its transferral to the screen). As far as I can tell, Bella and Edward get married, have sex and have a baby. It really is as simple as that (well, as simple as things can be with a human, a werewolf and a vampire who fancy each other). There was an awful lot of smooching and declarations of love (no actual nudity was shown, it is a teen film, after all), which I found a bit tedious to watch. But hey, it is a love story. I believe the actual sex scene on their honeymoon is forty seconds long, and to me, the fact that they wait until their wedding day screams out ‘Christian values’, and I’m surprised that vampires ascribe to such a thing. Plus the fact that when they do (finally!) have sex, something ‘bad’ happens – as if the story wasn’t an overt ‘hold off on the sex’ message as it was!

In my opinion, Twilight: Breaking Dawn (Part One) fell down because it focuses too much on the romance side of things and so it meant that there was no real action or suspense. It makes me wonder how much more mileage they can squeeze out of these same mouldy three characters. I can’t think of any nicer way to put this – but the film was simply boring. There’s not much else to say on the matter. I know that at some stages it appears to be all very dramatic, but come on, we all know that Bella’s not just going to die like that. What kind of film would that be? I actually preferred the second film, New Moon, compared to this one, because at least that had a bit of variety and it was a bit more unpredictable. This had a very standard formula, and it seemed like the plot was stretched to the limit, and possibly shouldn’t have actually been made into two separate movies at all.

The make-up special effects (the majority of which were done to Kristen Stewart’s face to give her that emaciated, heroin-addict look) were really quite well done, and took three hours to apply – this can’t have been an easy process and so I fully applaud Kristen for that. There was also digital effects done in post production to enhance the look even more, and I think that this worked a treat. Similarly, I thought that the werewolves were flawless, but unfortunately not scary at all.

Overall, Twilight: Breaking Dawn (Part One) is not a film that you should break your back to see. The storyline is weak and it doesn’t really touch upon anything that hasn’t already been seen in the previous films. It just takes itself far too seriously for my liking. However, if you have a young daughter, then buy it for her, because she’ll love you forever!