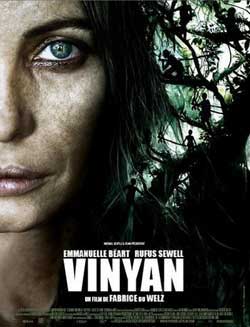 When someone dies a horrible death, their spirit becomes confused and angry. They become Vinyan. A couple leaves the civilized world behind and descends into a living nightmare in this chilling horror thriller. Six months after losing her only child in the Southeast Asia tsunami, Jeanne (Emmanuelle Beart, Mission: Impossible) is convinced she sees him in a film about orphans living in the jungles of Burma. While her husband (Rufus Sewell) is worried that shes losing her mind, he still agrees to take her to search for their son together. Introduced to a dangerous gang of human traffickers, they find themselves alone and stranded in the middle of a treacherous jungle, set upon by a band of feral children. Has their search for their son led them to a fate more horrific than death?

Vinyan, the film with a funny name was not a good film (The name actually means “drifting soul”). In fact, it was even less of a horror film if you even care to call it that The fact that it got lumped into a horror film category and a full feature in Fangoria, is beyond me. I’m sure some reviewers will try and coat it with deep psychological meaning, but let’s face it, it was a complete bore with no resolution.

Shall we begin? Directed by Fabrice Du Welz, the film focuses on 2 characters. The husband and wife team of Paul (Rufus Sewell) and Janet (Emmanuelle Béart )Bennet. Janet is one fine looking woman, no points lost there. Though where points are lost is not in the 2 actor’s performances. In fact they were quite good. It’s the no-where story that begs one to ask for the reclaimed 90 minutes watching they invested into this mess. 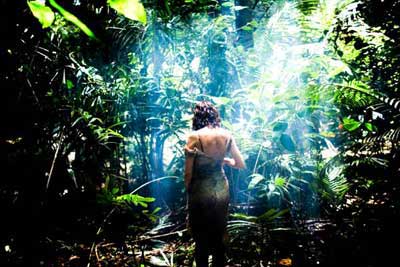 Our couple are still mourning the loss of their son Josh. Josh was swept away in tsunami 6 months back lost to the Berma region of the world. Though for some reason they still hold on to a hope of finding him. In a investor party back in the states, they see what looks like there son in a clip of the Berma promotional pitch. The footage is the back of someone walking and is not very clear to really determine it could be anyone. Though with hope in their hearts these 2 set off to seek out there son. The cost to get started ? An easy million and a half. It’s very clear from the get go that these 2 have plenty of funds to line folks pockets along they way whether they wanted to or not. Winsong, the conman, agrees to take them to their destination. 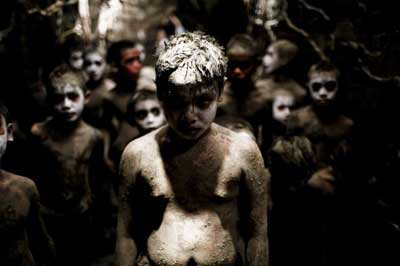 This is where the hunt begins to tire pretty fast. We meet alot of natives along the way that are easily persuaded as long and thousands of dollars are handed over for there help. A rather costly con if you ask me. They of course get to the part of the world they are seeking but do so in a primitive, dirty accommodations fashion. We learn that this sector of the world operates this way to make a living. In fact the selling of children is not problem or helping one to find there way. In between this constant $ changing of hands the couple find that they are subjected to a different way of life and culture with all its peculiarities. Out of there element, they get easily swindled in there desperate search. The constant investment of $ and hopeless results begin to further take its toll on the couple. They experience a bit of mental and emotional breakdowns in a search that most likely is futile. This rather drawn our struggle for resolution and closure in their hunt becomes somewhat like waiting for toast to finish. The point of the film is lost to a series of jungle running and native droll.

The fact that there is alot of beautiful country shots, national geographic natives, and tribal indifference, is lost to the story that really goes no-where. Further hauntings of dreams suggests more details in the story but not enough to really grab hold of. I was expecting a climatic horror show to arrive any second, but the real horror is the monotony. After this long you just want to see them find the kid, hug him, and roll to credits. Well the ending and last segment of the film is different than what you’d expect. Though don’t look for any life-changing realization to occur. The movie centers on a feeling of hopelessness, much like I felt as a reviewer of it. I’m gonna have have to give this one a firm – “this is no horror movie” – review and tell you all to forget that its foreign-based (which might be a interest point for interest seekers). There’s no prize in this crackerjacks box!