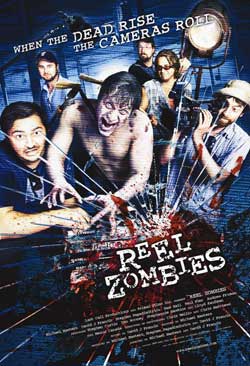 Independent Zombie Film makers, Producer Mike Masters and Director David J. Francis, the team behind the commercially unsuccessful Zombie Night 1 and 2, have found the climate for Zombie movies has changed significantly after the “real” zombie invasion begins. Hedging on the fact that the Zombie mayhem that has taken a grip on the nation is only a temporary problem, the film makers realize that once normalcy has returned, demand for Zombie product (now outlawed) will be at an all time high. The filmmakers seize an opportunity to do something they were never able to before on their meager budgets, make a memorable zombie film. This time, however, through using real zombies, the film will have an authenticity and production value previously unattainable.

What can I tell you? This movie F-ing Rocks!!!

Usually I will avoid reading a synopsis on new films just so I can get a fresh perspective on what it is I’m watching. So in it goes, the latest from Primal Films calling itself “Reel Zombies”. Now when you get screeners, there’s usually different types with marketing add-ons depending on where its coming from. So my first thought was …Ok, I guess this starts with the behind the scenes till we get to the feature, right? Then as it moved along something occurred to me, almost instantly….this is pretty damn funny, I hope there’s more of this!

Well it didn’t take long to realize that what I was watching “was” the actual film presented in mockumentary format. The other thing to quickly point out is that “most” of the onscreen talent was the film makers playing themselves. A quick look at the real credits and cast descriptions will confirm, that fact.

Directed by David J. Francis and Mike Masters who both play on screen producer / directors themselves are a pretty hilarious team to ride along with. It doesn’t stop with them as a number of the crew members and acting talent only add to the lunacy while attempting to make a movie in the worst possible conditions. Without going into the number of names on this production, I have to say there wasn’t a performance real or pretend that I didn’t like.

The movie in production is called Zombie 3 which is a follow up to there other 2 “real” films “Zombie Night” and “Zombie 2: Awakening”. Now I will say Primal did a pretty smart thing. They mixed reality with fiction into a mock zombie film with an actual zombie crisis going on in the background. The ongoing gag is that to make the film they can just round up and use the real zombies when they need the footage and use actor zombies for scenes where security might be an issue. There zombie catcher device is a hockey stick with a belt strapped to it to corral up the undead like cattle. Reel Zombies is about the “production” that goes on into the making of “Zombies 3”.

The movie moves from one funny scene to the next. Alot of the humor is assumed and demonstrated thru the craziness that goes on in a real production for a film which is not far from fantasy itself. Though with the inclusion of a few unique characters added to the team it branches off into even more situations than even a low budget film set wouldn’t tolerate.

For one, the DP who speaks mostly in French (with subtitles included ) provides a great persona of misunderstood foreigner translations that interacts with the scenes nicely. Other great moments include the casting of actors, the mix of bad performances, the recruiting of film team crew members with little experience and some great moments by the “on screen”acting talent that is just one laugh after the other. Lloyd Kaufman is also a bonus on screen as he reads the script lines, with camera notes and all.

Other great gags include the previous film zombies who have been just hanging around till needed or the next shoot. Or how about the film editor who moonlights the footage on side projects for Army commercials. “Primal films….oh ya, don’t you guys make Army commercials?”

One of the most endearing things about “Reel zombies” is it offers alot of surprises. All with pretty dead on humor centered around it. Even the way they bash there own films throughout the film has a very down to earth realization that makes em that much more attractive.

What would I compare this to? 3 things came to mind…….. “The Office (tv series) meets “Clerks” meets “Brutal Massacre”. It a bit of all that and yet still an original beast of an effort. Very easily I can say I loved every bit of this film. Being on quite a few productions myself, I know a bit about the reality that goes into these endeavors and Primal managed to take that reality, make it funnier and create a great film product to be proud of. Horror humor may not be everyone’s cup of tea, but if it is…this one is the one you should have!! – great work!

Reel Zombies will be showing at Grimm Up North as the English Premiere at 14.00hrs Friday 29th October.