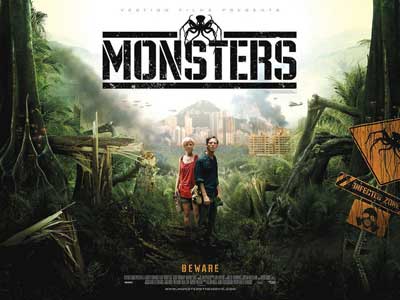 In the flood of independent films utilizing the ‘shaky cam’ technique, Gareth Edwards’ film “Monsters” has emerged from the tepid waters as a film festival darling. The movie’s premise is unique for a horror film. It focuses on the relationship between a man and woman as they desperately try to make their way home from a foreign land infested with aliens. Instead of focusing on the monsters and the madness that would usually accompany such a movie it is the interaction between the characters that drive the film. The end result is a Motorcycle Diaries of the Third Kind.

While in Mexico searching for the perfect shot, war photographer Andrew Kaulder (Scoot McNairy) is strong-armed into escorting his boss’ daughter Samantha Wynden (Whitney Able) safely back to the United States of America, but in order to do so they must battle their way through the Infected Zone. Six years before the start of the film NASA discovered the possibility of extraterrestrial life, but before the probe could land safely it crashed over South America. Shortly after the crash new forms of life began to emerge in the area and these infected lands were quarantined.

Gareth Edwards, the 35-year-old filmmaker was not afraid to smash stereotypes and described the film as a road trip movie that involved aliens instead of trying to shill the standard Hollywood horror movie. “My target audience was me.” Edwards laughed and went on to add that he only wanted to make a film that he wanted to watch and did not wish to get lost in the complications of trying to create a film that other people would want to see.

“Monsters” is a character driven piece and slow burner, but that does not mean that the monsters will be sight unseen. Fans expecting a Cloverfield repeat will be pleasantly surprised. Instead of an hour and a half of viewing characters dashing from unseen monsters, the monsters are brought front and center and there is no questioning what they look like.

“I wanted no pressure on the creature’s appearance,” Edwards stated. He believed that viewer’s would ultimately be let down in the end by the appearance of the monsters if he kept them vague and unseen throughout the film.

At his New York Comic Con panel, he displayed a tension-filmed clip, that featured the main characters, crouched in the back of a truck while a monster stomped around in the background. The creature was reminiscent of the classic tentacle monster from Orson Welles’s science fiction masterpiece, “The War of the Worlds.” As well as a visual homage to classic alien imagery, Edwards explained that he also wanted the monster to have some small grain of truth in its appearance.

He recalled seeing a report on the possibility of extraterrestrial life on Europa, a moon of Jupiter. It stated that since the moon had the possibility of possessing a subsurface ocean hidden beneath a layer of ice it had a very high possibility of also supporting life. Edwards modeled the monsters after this possibility and designed them to look aquatic in nature. He also believed that if aliens really did exist, like human beings who lived in shades of gray, the monsters would be neither good nor evil but a combination of both.

“Monsters” was shot over three months in South America and Mexico with a crew of only two people, Edwards and his editor Colin Goudie. It was filmed with a Sony EX3 with a Nikon 50 millimeter lens. The special effects were added in post with Adobe Creative Suit 4, and 3d Studio Max, and even his two laptops were donated by Intel and not paid for out of pocket. “Monsters” is estimated to have a $15,000 budget, but Edwards discredited this number as impossible and placed the cost to make the film closer to the $500,000 mark. Much of the film was shot with minimal scripting and the vast majority of the dialogue was improvised with locals recruited daily and pulled into the production as extras or even actors.

“Whitney Able is fluent in Spanish and while filming in South America it’s always best to have an attractive lady ask permission.” Edwards joked with a mischievous glint sparkling in his eyes while recalling how instead of heading out to shoot the standard scripted scenes they often, when out on location, would find an interesting spot and film it. Later the crew would find a way to work it into the film.

When asked about his favorite directors Edwards mentioned notable names such as Steven Spielberg, and James Cameron along with Rod Serling and noted that “The Twilight Zone” was one of the major influences in his work along with the Space Opera classic “Star Wars.”

“My favorite film is “Star Wars” and it made me want to join the rebel alliance. When I found out that it was all a lie, and that filmmakers are liars, my second best option was to become one of the liars.”

“Monsters” opens in theaters in New York and Los Angeles on October 29th.