When teen couple, Sam and Jackie, accidentally stumble upon a ghoulish party on Halloween night, they’re challenged by the devilish Johnny to a supernatural drag race. This is the premise behind BONEYARD RACERS, the newest short film from the creative minds at River City Television in Edmonton, Alberta. 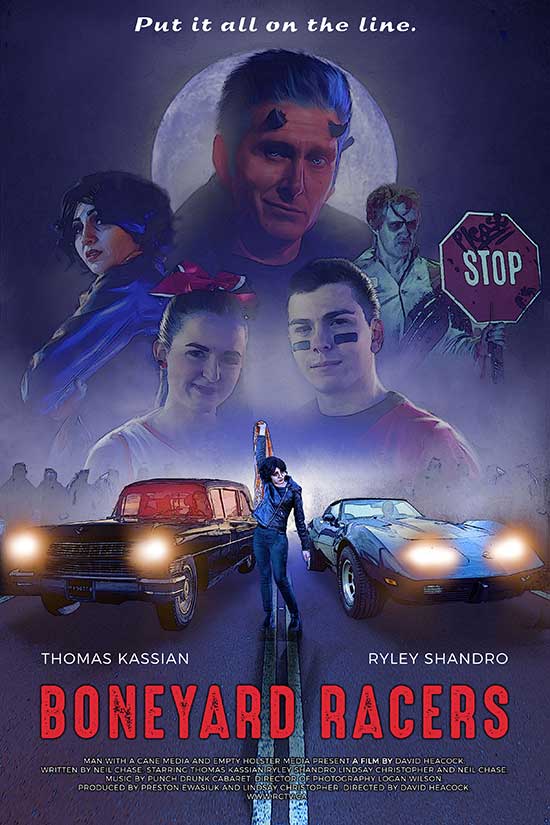 Winner of Best Screenplay honors at Screamfest, FilmQuest, A Night of Horror Film Festival, FilmMakers International Screenwriting Awards, Las Vegas Film Festival, Script Summit, and Hollywood Horrorfest, among many others, Neil Chase knows what it takes to write a great horror script. With BONEYARD RACERS, he crafts a tale of hot cars, cool demons, partying legions of the undead, and young love on the brink against an adrenaline-fuelled backdrop of other-worldly proportions.

And with cinematography by Logan and Philip Wilson (Bagman, Bagman Rising), and the soundtrack provided by none other than Canadian Rockabilly sensation Punch Drunk Cabaret, who also appear in the film, you know you’re in for one hell of a ride.

As Dee-Dee, the captivating zombie beatnik, says in the film, “Rain is wet, fire is hot, and guys race for dolls.” Only in this case, what you stand to lose is more than just pride.

Currently in post-production, BONEYARD RACERS is looking forward to a world-wide festival run following its anticipated January 2021 release, and work has already started turning the story into a feature.