Pronoia will screen at the eclectic and fast rising Austin Arthouse Film Festival although this year’s festival is running virtually.
In Pronoia, a man (Stelio Savante) and a woman (Hannah Jane McMurray) wait out a rainstorm in a hotel bar somewhere between ‘”here and nowhere.’ When the TV news reports the disappearance of a high-ranking Pentagon official, neither he nor she know of the ramifications it will have on their brief, seductive encounter. 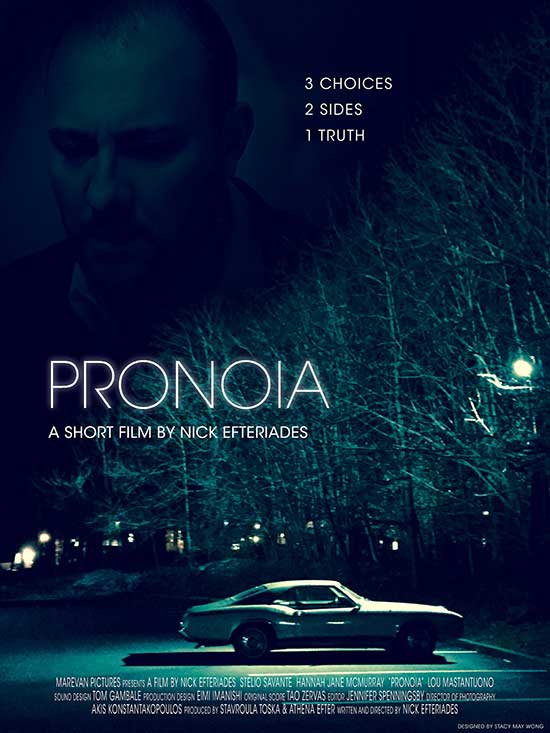 PRONOIA stars SAG nominee and American Movie Award winner Stelio Savante (INFIDEL, RUNNING FOR GRACE, EISENSTEIN IN GUANAJUATO), Hannah Jane McMurray (HALINA), Lou Mastantuono (AMONGST FRIENDS) and Catherine Chadwick (BLUE BLOODS). Produced by Stavroula Toska and Athena Efter, co produced by Stelio Savante, lensed by Akis Konstantakopoulos (THE CHOSEN, RUNNING FOR GRACE) and filmed on location in Florham Park, New Jersey.
Efteriades’ first feature ASTORIA premiered at the 2002 Santa Barbara International Film Festival, and then was released theatrically after winning several awards. Written and directed by Efteriades, Efteriades says “I was always fascinated by the very notion that cinema is essentially a magic trick on ‘reality.’ So, running with that notion during our current, bizarre political environment seemed apropos.  Melville’s Le Samourai and Resnais’ Last Year At Marienbad are movies that play in the background all the time for me.” Savante can currently be seen starring opposite Jim Caviezel and Claudia Karvan in Cyrus Nowrasteh’s INFIDEL on digital after a nine week theatrical run in the US.
Austin Arthouse Film Festival is dedicated to serving as a home for showcasing original works of arthouse short films from across the world that are independently produced, uniquely constructed, often experimental and serious artistic works.
Share