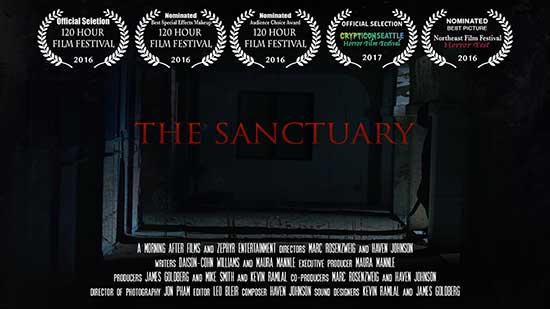 The Sanctuary premiered in Los Angeles at the The 120 Hour Film Festival on October 15th, 2016. The festival was created by James Franco and Scott Haze as a challenge for filmmakers to complete a short horror film in just 5 days. 17 hand-selected teams had 120 hours to write, shoot, edit, and finish their project.

The Sanctuary was nominated for the Audience Choice Award and Best Special Effects Makeup at the 120 Hour Film Festival. It was also nominated for Best Film at the Northeast Film Festival Horror Fest (Dec 2016) and screened at Crypticon Seattle 2017. The film is now available on YouTube and Amazon Prime Video.

Log line: A woman trapped in an asylum finds out the truth about why she’s there.