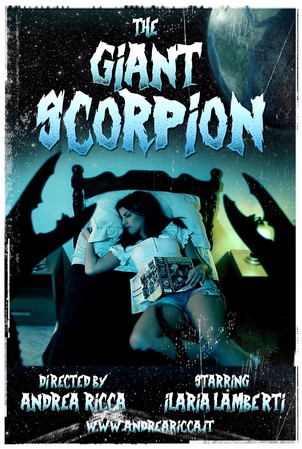 “THE GIANT SCORPION” is an independent science fiction horror short movie, with 3D graphic special effects, about a scorpion that became giant after the fall of a meteor. In other words: “What is better than a beautiful girl that sweetly sleeps under an ’80s issue of “Fangoria” magazine and fights monster with a sharp blade?” :) The short movie is also a tribute to ’50s movies like “The Black Scorpion” (1957). It was shot at zero budget and without any troupe, with the only help of an HD Camera and a Pc. Writing, shooting, editing, 3D animation and post-production are made by the director Andrea Ricca. Additional special effects (Sim fluids and Dynamics) are made by Giuseppe Cilli. Starring: Ilaria Lamberti.

More short films, kiddies! Today we have THE GIANT SCORPION, written and directed by Andrea Ricca.

I  have reviewed many of this filmmaker’s films before and I truly love them. For those who don’t know his work, these films are very short (usually no more than five minutes tops), with no dialogue and usually featuring only one live actor. The rest is done with CGI animation that is created by the filmmaker.

Because these are basically a “one man show” type of productions, I have all the love for them. The filmmaker is very prolific, producing several of these films a year.

Our story stars the lovely Ilaria Lamberti, who has appeared in several of the filmmaker’s projects. A quiet night is disrupted by a crashing meteor which has some unusual affects on the local wildlife. You can geuss what happens next.

This is a great homage to the classic “giant monster” style movies of the 1950s. Our heroine has to battle her way to safety against the mutated scorpion, and does a darn good job of it.

The CGI is really good in this one. There are one or two moments where it doesn’t quite work, but the monster is incredibly detailed and the movement is great. The blending into the real world is not perfect, but it sells the premise nicely.