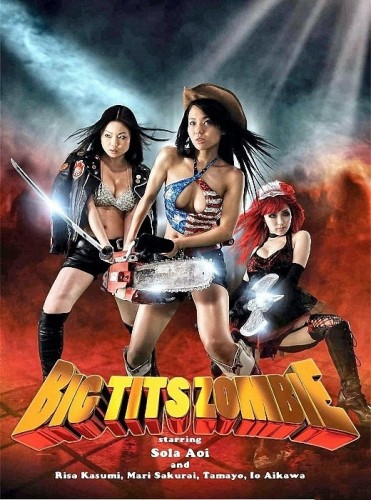 Big Tits Zombie (巨乳ドラゴン 温泉ゾンビVSストリッパー5, Kyonyū doragon: Onsen zonbi vs storippaa 5?, lit. “Big Tits Dragon: Hot Spring Zombie Vs. Stripper 5”) is a 2010 Japanese fantasy-horror film. It was adapted from the manga Kyonyū Dragon by Rei Mikamoto, and stars several known faces from Japan’s adult movie industry, most notably Sora Aoi. It is directed by Japanese cult satirist Takao Nakano and much of the action is shot in 3D. The film is said to be an ironical take on Japanese pop culture.

I suppose if you were to go on title alone, this might be a huge selling point for the film. In the least, it captures attention…leave it to the Asians to just whip these oddly titled films out of nowhere. I love it, a racy sense of humor thrown into movies that otherwise might be just called something lame like…I don’t know, attack of the zombies..or something (use imagination). So let’s not forget the 3D portion added to the title. Now let’s discuss this first. Yes it has 3D, but it only shows it in called out seconds. A timer appears on the top of the screen and then for 2-5 minutes we get 3D usually placed on top of a dancing girls sections. I didn’t have my glasses with me, so I’m relieved actually that the whole film wasn’t in 3D, though I will say it sure is a bizarre way of doing it. Viewers are expected to have there glasses in hand and whip them on when the screen says to do so. 3D and big tits, what a combination. Though I should point out the obvious…..the American classification of big tits and the Asians are 2 different things. If big tits were called out in America, those tits better be popping out like Hindenberg re-launching into he stratosphere. Though for the Asian versions, it kind of falls somewhere between status quo and Lindsay Lohan…. (read into that whatever you wish). So in summary, Big tits, not so big. 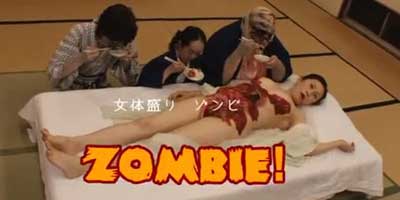 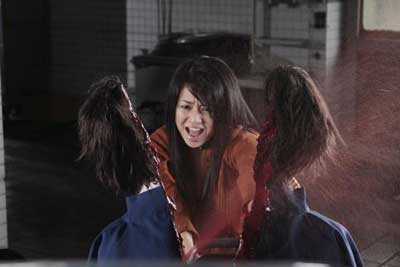 Male viewers will still appreciate the occasional cat fights that occur over very little. Yep bras pop off here and there too. But all this aside what does it have to do with zombies? Ok I was getting to that. The film begins with a classic martial arts – chick vendetta – kill all the zombies scene that actually works pretty well. Some cool FX work is featured here and is a nice start to the film. After that though it drags down a bit as we get into the drama of the strippers trying to make ends meet, having there source of income and club shut down for a bit and making the move over to a local massage parlor. They prefer to call themselves dancers and even entertain us a few times with some burlesque style performances. Each of these is in 3D if you didn’t get that yet. It’s when they discover a hidden doorway in their room closet that they also discover a basement filled with arcane books and supernatural voodoo collectives. Yep they even have an old magic book, that shouldn’t be tampered with. It’s tampered with. 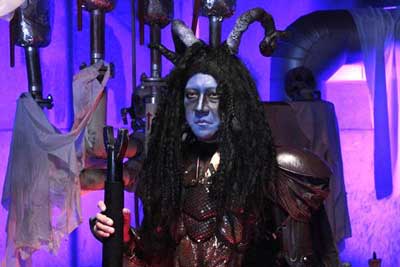 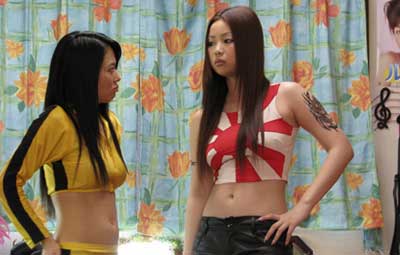 As the film carried forth it began to get a bit too cheesy, a bit to laborious that I caught myself falling asleep 3 times. The makeup used on the zombie was some of the poorest I’ve seen on film and the direction seemed to get lost to the point where you really didn’t care anymore. It ends its last pass on the note that it starts, that is ……a zombie martial arts stand-off. This is perhaps the best thing going for this film, but it failed to hold any real meat in-between. The sexuality is more gratuitous than natural and the characters are extremely forgettable. I really didn’t find any standout character in this film at all, that remembering names felt like a waste of time. The 3D was a gimmick that could have been left on the “idea cutting room”. In the end, Big tits zombies sets out to mirror current trends but falls extremely short on all levels. I had high hopes that this one might sit comfortably with other OTT Asian horror films but in the end is a joke played on itself. I’m gonna have to pass on any recommendation for this one that for me was just plain boring. 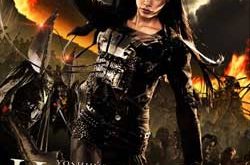 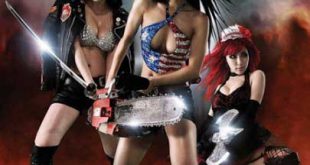