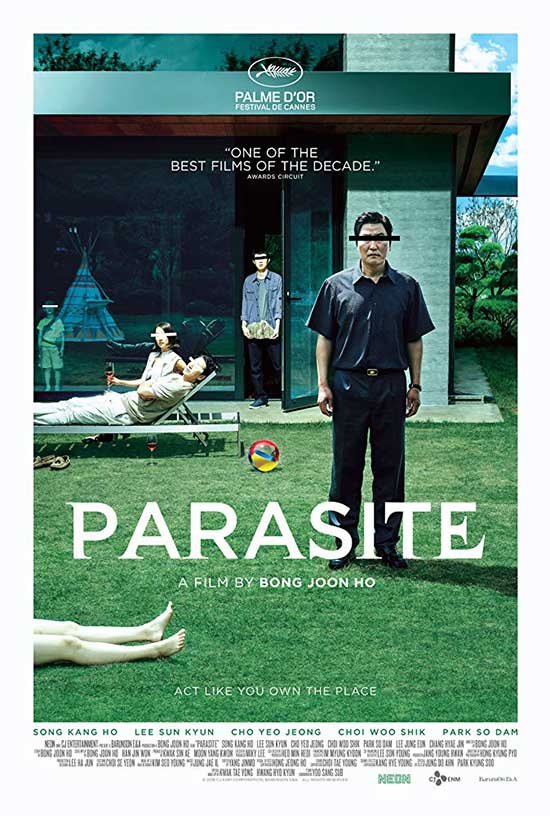 A poor family, the Kims, con their way into becoming the servants of a rich family, the Parks. But their easy life gets complicated when their deception is threatened with exposure.

If you haven’t already heard of Bong Joon-ho’s latest film Parasite, you must have been living in a barrel for the past six months. After premiering at Cannes Film Festival and receiving not only a standing ovation, but also the coveted Palme d’Or award, it has continued its triumphant journey, winning awards for best foreign language film in The Golden Globes and Baftas and getting a whopping four Academy Awards, including best picture.

When a film gets this much hype build around it and it feels like anyone and everyone in the world is telling you to see it, it’s very easy to start wanting to do just the opposite (believe me, I know. It took me years to watch Crouching Tiger, Hidden Dragon just for that reason). However, no matter how irritating the constant build-up gets and how many “If you loved Parasite you should see…”-clickbait articles you come across, I would urge you to give Parasite a fair chance, because much like Crouching Tiger, it is an excellent example of a film that is actually deserving of all the fuss.

Parasite tells the tale of the Kim family who live a meagre existence in their basement apartment, folding take away pizza boxes to make end meet and shooing off urinating neighbourhood drunks from their doorstep. When the family’s son Ki-woo (Woo-sik Choi) gets a chance to work as an English tutor for the well-to-do Parks, the Kims see it as a chance for all of them to move up in the world. Slowly but surely the whole family trick themselves into the Park family’s service: Ki-woo’s sister Ki-jeong (So-dam Park) is hired as an art therapist for the Park’s eccentric little boy Da-song (Jung Hyeon-jun), their father Ki-taek (Kang-ho Song) weasels his way to be the family chauffeur, and after some professional level scheming to get the current housekeeper fired, their mother Chung-sook (Hye-jin Jang) comes to the Park family’s rescue and takes on the position. All of this without the Parks knowing the four new staff members are in fact part of the same family. But as it often is the case in life, things don’t stay rosy for long and when secrets from the past come knocking and the quiet resentment toward their employers grow, the whole ploy comes tumbling down in a shocking conclusion.

The shifting tone of the story makes it hard to fully describe in simple terms. What starts out as a dark comedy, takes a lot more serious turn in the middle and continues to even darker waters. Alongside the comedy runs the continuous undertone of social criticism, which is dealt with in a gentle manner, never preaching but always present, perfectly fitting with the tone of the story. The light humour that sets the pace for the first part of the film is well crafted and genuinely funny. It’s nothing outrageous and might not arouse giant belly laughs from its audience but will undoubtedly give you a quiet little chuckle or two. Even after the halfway point, when the mood of the story shifts, the humour is still there, but in much darker form. The slapstick that earlier would have brought a smile to your face, will now make you think twice whether it’s appropriate to laugh or not.  Despite the tonal shift the ending, in all its cruelty, still comes as a shock. The whimsy of the beginning is well and truly gone and the reality of the film’s heavier themes crash down on you with full force. The after taste is bittersweet and sorrowful, much like the undercurrent of the whole story.

There is much to love about Parasite. The performances given by all the cast respectively are a pleasure to watch. Kang-ho Song is wonderfully lovable as the well-meaning father Ki-taek, making his decent into bitterness and hatred even more poignant. Cho Yeo-Jeong does a wonderful role as the somewhat air headed Mrs. Park, who in her clueless manner manages to be both sweet and off-putting all in one go. Lee Sun-kyun as her husband and the head of the Park household is as cold and unapproachable as one would expect; perfectly polite and pleasant on the surface but dig a little deeper and what you find is not a charming as it might first seem.

Besides the stellar cast the film also boasts a fantastic soundtrack that perfectly set the mood for the different stages of the story. It alongside Kyung-pyo Hong’s marvellous cinematography help the story along as nearly as much as the actors do. Especially memorable moment is seen around the halfway point of the film, with the Kims making their way through the nocturnal city scape back to their flood filled apartment. The whole sequence is collected of images so beautiful that each one of them could be a painting, making what could otherwise be just a filler scene, one of the most impressive moments in the whole film.

For fans of dark comedy, fans of well-designed drama, fans of films that dig into social issues and just plain anyone who loves great cinema, Parasite is a must see. It’s smart, funny, touching and all-around fantastic watch, that will stick in your mind like a leech and make you want to go back for a second viewing.