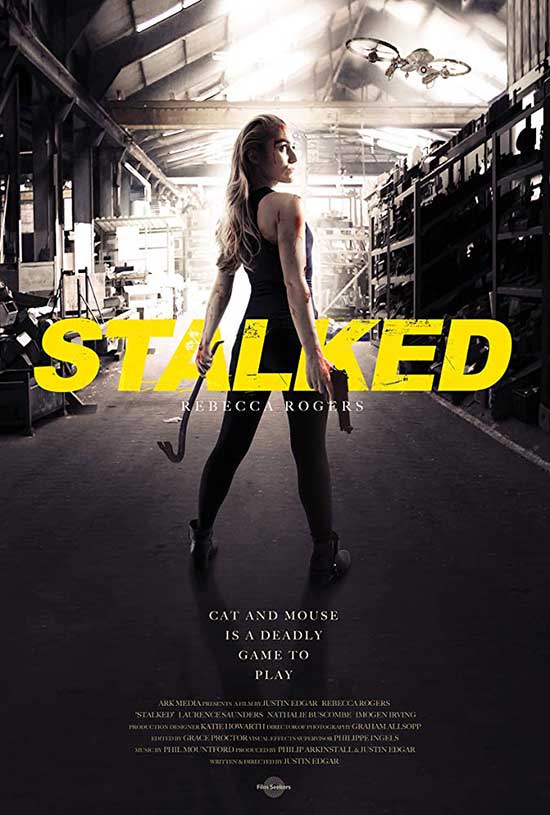 A female-driven action film set largely in one location, Stalked focuses on a young woman (RED 2’s Nathalie Buscombe) that wakes up in a deserted factory where she is hunted by an invisible force.

Written and directed by Justin Edgar (The Marker, Doctors), Stalked is an unexpected force. Sam (Nathalie Buscombe) is on a hike/run in the woods. Edgar’s winds up cutting to Sam sparring with her coach. We meet Craig (Ian Sharp) whom is the father of Sam’s child. Craig and Sam are split up. The new girlfriend waits in the car. Berenice (Vanessa Donovan) is the fun, loving, and smart friend who is trying to take Sam out for a good time. Sam wants to stay in and have a glass a wine…or two. (Me too. I need a glass of wine.)

Sam wakes up with a master blaster hangover from hell. (She still looks great.) She is worried and calling Craig. Justin added in some honest to goodness real family stuff that is important and not dealt with. Being responsible parents… or at least trying to be. This is uneasy because there is a baby involved. I dread what is going to happen. 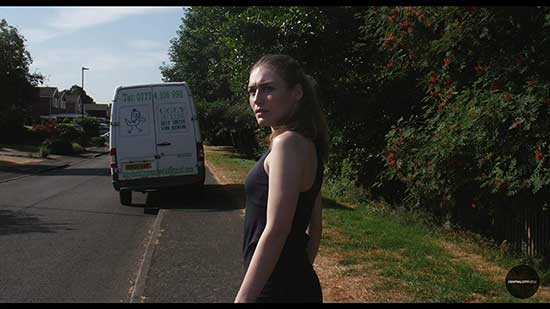 SEE, the random van parked outside is exactly what I’m talking about! AND, Sam is grabbed. (Yelling at the screen never helps. DON’T GO NEAR THE VAN! Grab a weapon!) She has her phone but as usual, No Service. There has to be a way to bypass that No Service situation. Sam seems like she will be a fighter. There is a phone in the giant factory looking building but it doesn’t work. There is some kind of strange force. Sam meets Stacey (Imogen Irving), she looks scared to death. She briefly explains how she was kidnapped.

Sam and Stacey are trying to break a door down. Its sealed and this factory is GIGANTIC. The aerial shot shows the massive buildings and land. The film moves at a decent pace, it makes sense to explain what these characters went through. Sam is gone for a few minutes and poor Stacey is chained up and bleeding to death. WHAT IS THIS? The Invisible Man?

Okay, so there is a Jigsaw voice/ Scream voice. A creepy voice. This is the worst because you cannot see what this is? Is it a person, a ghost, an entity? Creature that turns invisible. Creature features are great. The actors are doing a great job fighting with nothing. It is difficult too because this factory place is full of horrible objects that can be used against Sam. Sam found a computer, maybe she can find some answers? Google it! That applies to monsters, stalkers, serial killers, invisible creatures. Google it! Sure. Sam is also being watched or at least being recorded. WAIT!? She sees someone on camera. He looks like a person. Hollow Man (2000) starring Kevin Bacon was another creepy film that involved Kevin Bacon’s character being invisible.

Sam is smart and wants to get back to her kid. She is building something flammable. Okay, so now he wants her to play a game. (Jigsaw? Nope. He is causing his own chaos elsewhere.) Sam is up the creek without a paddle. She needs a paddle, a weapon… anything! A kid and unties Sam. “Bad news.” Is this kid a set up? Is he real? This movie is making me question everything. I suppose that is good. It is engaging. It keeps the attention.

Okay, he appears, disappears? Tess (Nathalie Buscombe) shows up now. Sam and Tess are trying to get out of this building. They are in the middle of nowhere, the poor kid. Oh man. This is horrible. NOW a drone shows up that is shooting! Sam has turned into the stalker now. OH MAN! This is really a stressful movie. Does he see her? Is he messing with her?

This is a tense movie. Justin really digs and hits those uneasy points. It is almost uncomfortable but in a good way, if that makes sense. You feel Sam’s need to get away. She did a SNEAK ATTACK! This is crazy. She is putting that boxing to use. I want to know who it is? Also, he’s wearing a mask and a psycho with a drone that shoots. She is trying again to get away. (Oh, LORD! WHY! Randy from Scream is somewhere disappointed.)

HES BEHIND YOU!!!! Maybe Sam should put the weird invisible outfit on. She finds a badge and a computer. Is this Roswell? Area 51? CIA? Military? What is happening? Well, we discover they know how to be invisible. This is trippy. So, out of nowhere Tess reappears. Where was she lurking? I was right, Sam is going to wear the invisible outfit. 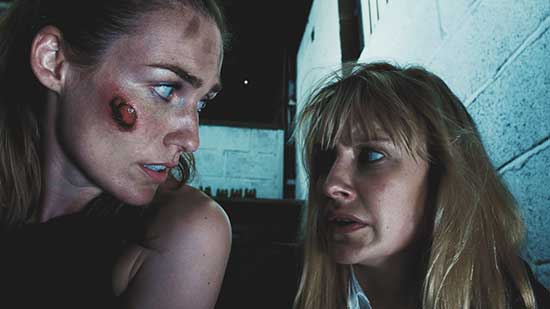 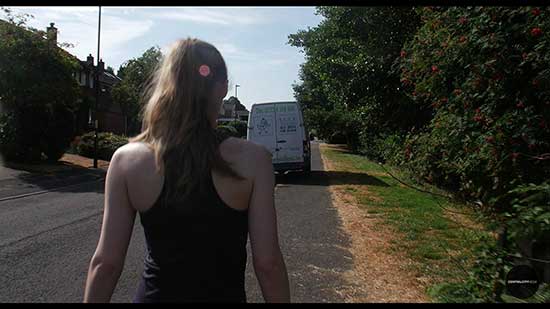 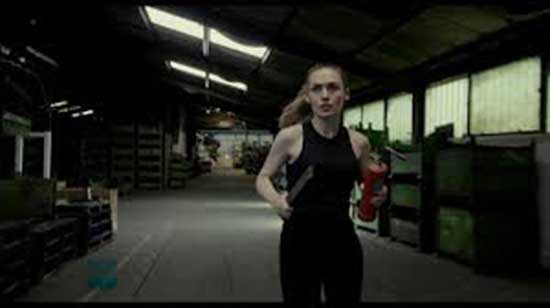 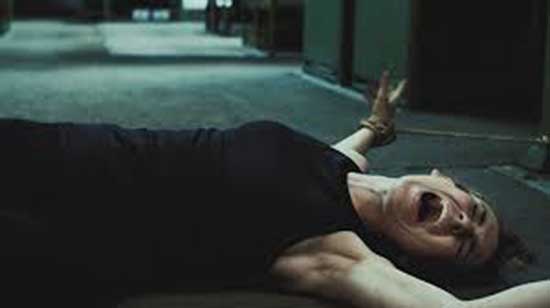 Sam is invisible now. I have so many questions. So many questions for Justin. The drone can’t see her now either. That seems helpful. But, can other people wearing the invisible suits see each other? Her suit seems to be losing power too. (sigh) Uh-Oh, Tess is still inside the building. This is one of those movies, it has action, suspense, moments that aren’t just jump scares but you get such an uneasy feeling. 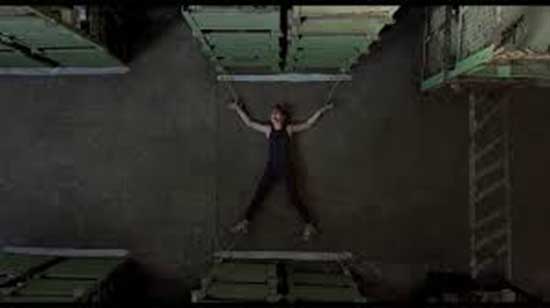 It is towards the end and it is still nerve wracking. It’s like you expected Hostel to happen. Sam really put up a fight. Make sure to watch Stalker.