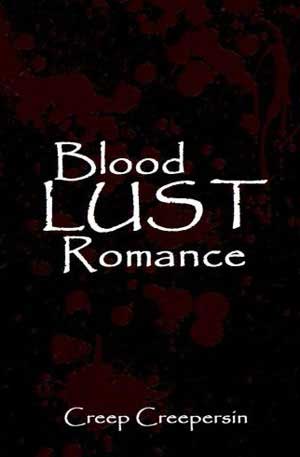 Blood Lust Romance is a fairly short book about five criminals and what happens to them on one given day as they decide to rob a house. Hint: things do not go exactly as planned, to say the least. The novel basically begins by giving a run-down of the criminals: their general individual personalities and their position/importance in the gang. The five criminals are Blacky, Red, Johnny, Gilby, and Snake. The narrator, Mr. Creepersin himself, explains that back in the day, Blacky used to run the town—he was the boss in his gang. These days, though, things have changed; he no longer has that same power and authority. Red is Blacky’s girl, who is an ex-hooker. Not too much detail is given regarding Johnny, Gilby, and Snake, minus a “small” addition to Gilby’s background, which is revealed towards the end of the story.

The five criminals decide to rob a specific house in town, after being told that there are wealthy items in the house, and that the parents were gone for the weekend; only the daughter, Bobby Joe, and one of her friends were to be around. Bobby Joe’s friend is almost immediately killed, and the criminals take Bobby Joe captive. What follows is terrifying torture and quite explicit sexual abuse…but, “to whom?” and, “by whom?” become the ultimate questions. I do not want to give any more detail, as this is quite a twisted story, in more ways than one.

The story is told in a very interesting and different way: literally through the eyes of the narrator. Mr. Creepersin explains in his forward that this novel was originally written as a screen play and was meant to be made into a movie. The only way he could think of doing the story justice in book-form was to have himself present to explain details that were meant to be portrayed visually. His presence is unknown to the characters, though; they do not know he exists. Mr. Creepersin’s decision to present his book in this form seems to have brought a whole new aura to the story than he seemed to have originally intended.

While he uses his presence on many occasions to simply fuel the sexual aspects of the book—aka, attempt to portray how “attractive” the girl characters are (most of the time just sounding very perverted), there are times when situations “change” because of something he decides, as an onlooker, to alter about the characters’ surroundings. Hence, Mr. Creepersin works as a form of “god” within his own book. This alone could have so many implications: Does God in fact exist? If so, does God interact on a daily basis with humans, altering their paths? And, does he/she do so on a pure whim, as Mr. Creepersin does with his characters? The possibilities and debates could go on and on. My big question, though, is: Did Mr. Creepersin intend for this? Something tells me he did not…

Personally, this book is not exactly my cup of tea. First and foremost, I do not find Mr. Creepersin to be an exceptionally good writer. He is certainly right in thinking that having his story as a novel is not the best medium for it. I definitely think the story would be better portrayed as a movie. Granted, I am very interested in seeing how this story would be translated to film; it is so sexually explicit, I cannot imagine how it could make it to the big screen without losing a lot of its original content.

Secondly, the story itself is not one that normally intrigues me. The story is very sexually graphic and quite twisted, from both a sexual and a horror standpoint. I had recently seen the remake of Last House on the Left while reading this book, and the two reminded me of each other. I left Last House on the Left with the same general attitude: just very dumbfounded by the explicitness and overall “reality” of the story. But, I am sure there are definitely people out there who would very much enjoy the story.

The ending is also something that I would like to comment on, as I did not exactly care for it. But, at the same time, I do not want to ruin the ending for anyone who plans on reading the book. Basically, it reminded me of an M. Night Shyamalan ending… it came out of nowhere with no build-up—no connections throughout the story that could help the reader to figure out the ending on their own accord. The ending definitely does leave you confused enough to want to know what exactly just happened. There is a sequel that hopefully answers this question, entitled Blood Lust Revenge.

My favorite part of Blood Lust Romance is probably the challenge of reading the book where the author acts as an involved, yet separated, god-like narrator. It really messes with your mind at times! But, if you enjoy sexually charged stories mixed with death, torture, and blood, I definitely recommend this book!