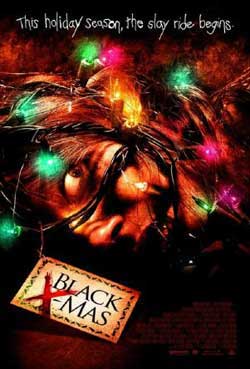 It’s Christmas break and the phone won’t stop ringing at one sorority house, where the ghost of a killer lurks and coeds are being systematically murdered one by one. In this remake of the 1974 slasher flick, a bloodthirsty psychopath is on the loose — will sorority sisters Kelli (Katie Cassidy), Dana (Lacey Chabert), Lauren (Crystal Lowe) and the others escape with their lives? Jessica Harmon, Michelle Trachtenberg and Andrea Martin co-star.

In 1974, an independent horror movie was released that would change the face of the genre. Many credit Halloween for laying the foundation for the modern horror film, but in fact Black Christmas was the one that started it all. Predating John Carpenter’s masterpiece by four years, Black Christmas is a terrifying chiller following sorority girls that are stalked and then murdered by an unseen killer lurking in the shadows of the attic making disturbing phone calls. Thirty-two years later the cult classic was given the ol’ remake treatment. What’s new after all?

Glen Morgan(Final Destination, Willard) was given the task of updating the film. Not surprisingly, he wanted to explore the backstory of the film’s villain, or villains in this case. One of the aspects that made the original Black Christmas so unnerving was the fact that the audience never knew who the killer was. His identity was never revealed, which bathed the film in suspense. Unfortunately, for whatever reason, Morgan chose to cram the remake full of unnecessary flashbacks. Billy Lenz, who could have been a creepy antagonist if handled correctly, was subjected to extreme close-ups and family incest. I’m not kidding, the kid has sex with his mom. Something’s should just be left to the imagination…

The plot was basic and generic. Fifteen years ago, Billy Lenz slaughtered his family and was sent to Clarke Sanitarium. On Christmas Eve he escapes(Gasp! Never saw that coming) and returns to his home only to now find it a sorority house. And the rest is murder by numbers for Billy, as he kills off the girls one by one. In between the kills comes the life story of Billy Lenz, who was born with a rare liver disease that left him with yellow skin. That’s right, our terrifying slasher has yellow skin. You can’t help but chuckle when a spot of yellow appears in between a crack in the wall as the soundtrack booms in the background. Were the filmmakers actually expecting this to jolt the audience?

In between the flashbacks, which range from 1974 to 1995, we are subjected to the most annoying and clichéd group of sorority girls one would expect to find in a slasher movie. Heather(Mary Elizabeth Winstead), Kelli(Katie Cassidy), Dana(Lacy Chabert), and Melissa(Michelle Trachtenberg) try their best to keep their characters alive, but the poor character development and laughable dialogue keep them drowning through the films entirety. Andrea Martin(Mrs. Mac), who also had a role in the original film, is the one shining star in this acting nightmare. It’s disappointing that she was not given more to work with.

Throughout the whole ordeal, the girls do nothing. I repeat, NOTHING, to get out of the house. Even while their fellow sisters are dying left and right. I don’t care if there’s a snowstorm rampaging the night. I’d rather fight the elements than stay in a house with a deranged psychopath. At one point in the film the other girls actually leave one of the others upstairs asleep, by herself. Even though they’re aware of the situation. That is just one example of how unflushed the script is.

This is a slasher movie, so one would expect for the kills to be creative. Well their gruesome, but not imaginative. We see a lot of blood spraying against windows and walls, and eye gouging scenes. Which get truly repetitive after the second or third round. Apparently the makers felt the repetitiveness, so they threw in a demise by icicle and ice skate for good measure. Nothing is ever mentioned why Billy even consumes his victims eyes. It seems like it was added in during reshoots to give the film that extra bit of shock value. On top of that, we barely even know these people. So why would we want to root for their survival? There are no chase scenes, which as far as I’m concerned should be a horror movie requisite. This was a grave mistake on Morgan’s part. The set design by Mark Freeborn was brilliant. Billy chasing our protagonists through the house could have made for a few nail biting moments. Instead they just run a few feet and die.

By the films climax, you’ll just be waiting for this to end. But not before the shocking twist is unleashed. SPOILER- There are not one, but TWO killers. Remember that incest scene with Billy and his mom, well, she was impregnated with baby Agnes. And for some unmentioned reason, the two went on a murderous killing spree. Both wearing only their pajamas. If you thought Billy was laughable, wait until you get a load of Agnes. A man in drag…? This twist could work, except at the very beginning of the movie a sorority girl is murdered before Billy even escapes from the asylum. Only a fool wouldn’t realize that there were two different people.

It’s not all bad. The film does have some well implemented dark comedy, some probably not intentional. And the direction by Morgan is fresh. He uses disorientating camera angels and movements to keep the bland story somewhat alive.. And the print does have a nice saturated and clean vibe to it. On another positive note, the use of “Dance of the Sugar Plum Fairy” throughout the soundtrack does throw some slight tension into the mix. But these are all small things that will be overshadowed by the many faults.

Black Christmas tries to be many things. It feels as if it were trying to be clever and be a tense little mystery. But at the same time it’s as if it were wanting to achieve a slasher status. Either way, it doesn’t work. Unfortunately for fans of the original and horror genre, Morgan never fully trusted himself to actually construct his own version of Black Christmas. Instead, what audiences were treated to was an unfocused and pointless reboot. Trust me, when Christmas time arrives skip this and watch the original instead.