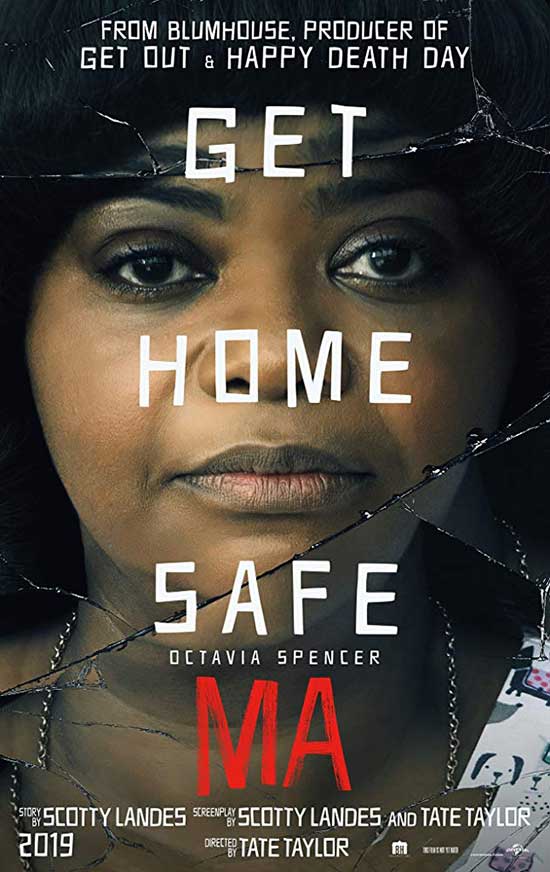 A lonely woman befriends a group of teenagers and decides to let them party at her house. Just when the kids think their luck couldn’t get any better, things start happening that make them question the intention of their host.

Sometimes, not always, throwing an actor at an average script raises that material by ten points. Case in point: Ma directed by Tate Taylor (The Girl on the Train) and written by Scotty Landes (Workaholics). Here we find a film that could easily have slipped under the radar cloaked, as it is, in its VOD narrative. Incidentally, the film has wholly bypassed a cinema release in Australia and can only be experienced via home entertainment. Boos all round on that one.

Anyway, back to the plot. Having moved to the Middle-of-Nowhere, Ohio with her mother, teenager Maggie (Diana Silvers, Booksmart) finds herself quickly adopted by a group fun time kids, who love nothing more than getting drunk on a Friday night. The only stumbling block is none of them actually being old enough to buy alcohol. Camping outside an off-license in the hopes of cashing in on the kindness of strangers, the group manage to convince the seemingly timid, Sue Ann to do them a solid.

Played by the fabulous Octavia Spencer (The Shape of Water), Sue Ann appears to be a good old girl who, despite her bowl cut and dowdy ways, embraces Maggie and her gang as if they were her own children. She continues to buy them booze and offers them up to her basement under the pretence that she’d rather they drank in a safe place. Hell, she even enforces a sober driver policy ensuring there’s someone in the gang to get everyone else home. She seems like a good egg.

Unbeknownst to the happy little drinkers, Sue Ann is not everything she appears, and Taylor takes great glee in ensuring that we know that before they do. Leaving themselves open on the internet, in that way teenagers do, Sue Ann can comb their social media accounts to find out more about them and use it to her advantage. Sue Ann has a plan, and it’s going to get messy.

Having reportedly asked to be part of Ma after reading the script, Spencer is the heart and soul of this movie. She manages to add depth to the character who is, let’s be honest, relatively two dimensional despite all the flashbacks that crop up detailing her own teenage years. Managing to go from warm-hearted to cold staring at the flick of the switch, Spencer is not averse to some Fatal Attraction histrionics, while also leading us to believe that the teens would hang around someone who might be a little dangerous. It’s hard to think of another actor who could pull off forcing a boy to get naked at gunpoint, and then still win the room over by saying it’s a prank. While she certainly doesn’t ground the film, Spencer’s involvement in the film makes swallowing some of its contrivances a little easier.

Taylor, meanwhile, keeps everything moving forward solidly, even when the film loses what subtlety it had to allow Spencer to be balls to wall Baby Jane psycho. You don’t want to pull too hard on the narrative threads that have come loose in a film like this, and the director ensures you’re distracted enough until the credits have stopped rolling.

Despite its big star and capable director, Ma is not bulletproof, and you will be expected to overlook an awful lot before you get its grim conclusion involving asphyxiation and a commentary on literal whitewashing. The fact it gets away with it is commendable. Sometimes you just want a film to make you jump and run a cold finger up your spine. In that regard, Ma certainly ticks all the boxes. Let’s face facts: Put Katherine Heigl in this film, and it would have sunk like a stone (See: Unforgettable), but Spencer’s sterling work helps paper over most of the cracks. Get on this film.