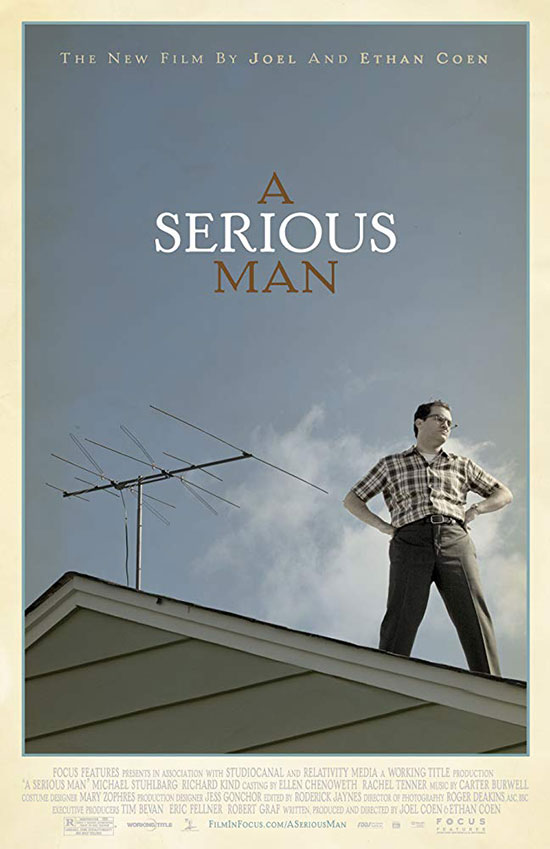 Larry Gopnik, a Midwestern physics teacher, watches his life unravel over multiple sudden incidents. Though seeking meaning and answers amidst his turmoils, he seems to keep sinking

Another odd quirky gem from out of the minds of the Cohen brothers, Ethan Coen and Joel Coen, A Serious Man (2009) takes a dramatic comical look at the Jewish community. Please note that by review end, I will be disclosing spoilers to try and make sense of the direction this piece takes us on. Even in review, it is a film that should be experienced for its credibility while begging for explanation.

Larry Gopnik (Michael Stuhlbarg), our main character of the film is a 1967 setting physics school teacher located and centered in Midwestern, Minnesota. His Jewish heritage and fellow upbringings are tested to the limit as he tries to navigate his life between the conditions of Hebrew religion and his home and work life. 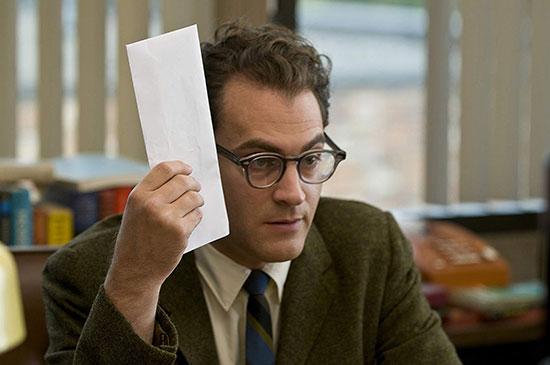 As we enter into his day-to-day, we are about to embark on a journey that erupts into seething chaos for him across the board. At work, he awaits his tenure while dealing with an Asian student who won’t accept his grade and the boy’s confronting determined family.

In addition, he is informed that an anonymous person has been sending in letters with intent to de-rail his tenure (of which he is told not to worry a bout). If that weren’t enough, it may have balanced his life if he had the support of his family except that he has been informed by his wife that she wants a divorce, a Jewish divorce (a Get), due to her attraction to another man, Sy Ableman (Fred Melamed)

Larry, who is caught by surprise, finds himself navigating his Jewish superiors for advice (while never really getting to see the man in charge, Rabbi Marshak). Life moves from one event to the next that ranges from mosks to funerals to Bar Mitzvah’s that clearly consists of most of his neighbors, co-workers and friends. 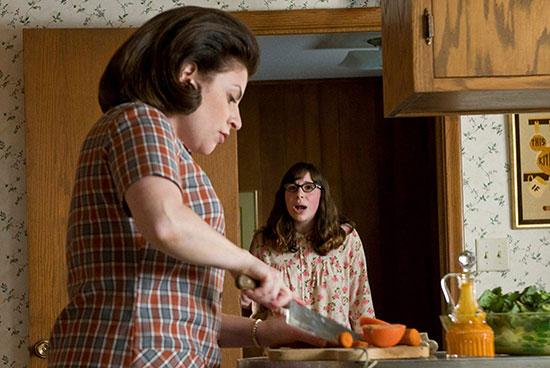 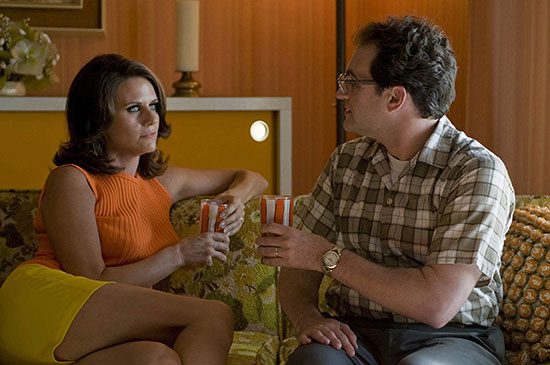 The term “A Serious Man” is often used as a level of attainment within his community, however seems mismatched to those who have received that label. Larry Gopnik, who really appears to be the only true intelligent member of his community (that doesn’t come with baggage) is positioned as the most likely to lose it as a contradiction.

“A Serious Man” is a movie that progresses itself simply with the weight of the world. Larry becomes obsessed with his and his neighbor’s property line while his temporary live-in brother Arthur keeps getting arrested for gambling (and sodomy). This and other situations seethe as a backdrop to the storyline

So what is the movie “A Serious Man”, and what is it all mean?
In short, it’s a movie about answers, while seemingly offering none. Midway thru we are given a story that appears to be leading to a finale and then is cut short……offering none. I see this story as a foreshadow to the rest of the film which takes its stride in similar direction. 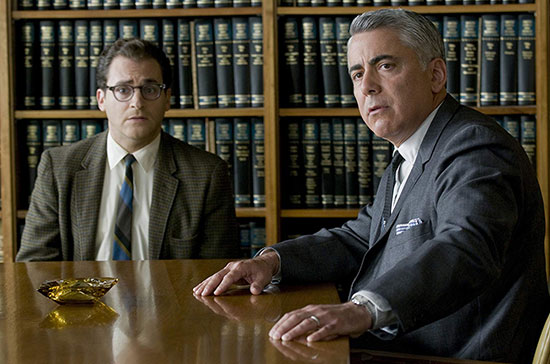 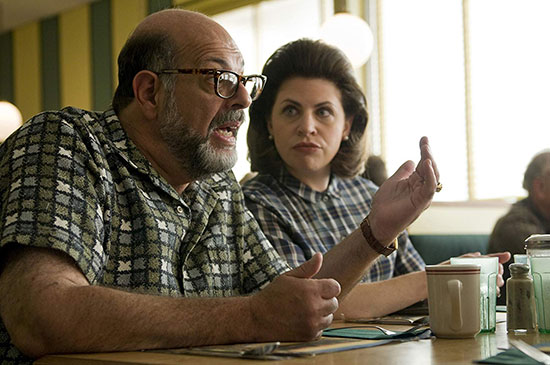 By the close of film, we clearly begin to realize than all of the film’s issues and events lead to a a very wide unresolved close. The end (which at the time of seeing it thought it sucked), also leaves us as viewers without resolve. Larry’s divorce, his tenure, his property line, his legal cases, his sudden interest in the girl next door, his son’s unfulfilled debt…all unresolved culminating in a completely unfinished piece. It’s a tease of the worst kind but yet still fulfills a certain sense of journey. This is probably the best way I can sum up this film while still making it sound interesting enough to experience.

This approach is not entirely groundbreaking as was seen in past cult films like “Easy Rider”, “The Loveless” and “Two-Lane Blacktop“, that end on similar unresolved notes.

In all, this film has a slow grind dark comedic aspect that seeps to the surface by a series of circumstances. Much in the same way films like, “The Office” and Napoleon Dynamite” make use of character appeal, so does “A Serious Man” which navigates between a whole spectrum of likeable and odd Jewish characters. This story has intent and purpose, which primarily centers its main story on the breakdown of Larry Gopnik. 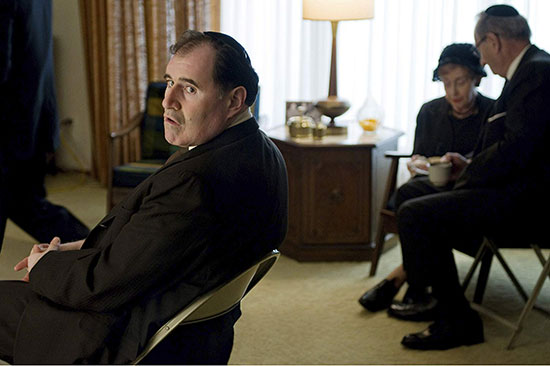 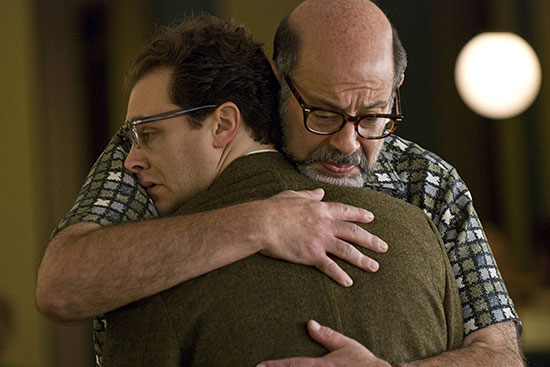 By design, this movie is directed and written to create a lifestyle and window into one person’s life, invoking a cult inspired piece that mirrors the frequented approach the 2 Coen Brothers are often noted for. It’s not their best offering or worst, but is still offered as a seasoned film that is hard not to laugh with. Because of this, I can recommend it to viewers who appreciate their style and want more of it. Though be prepared to contemplate its ending and what leads up to non-finale.