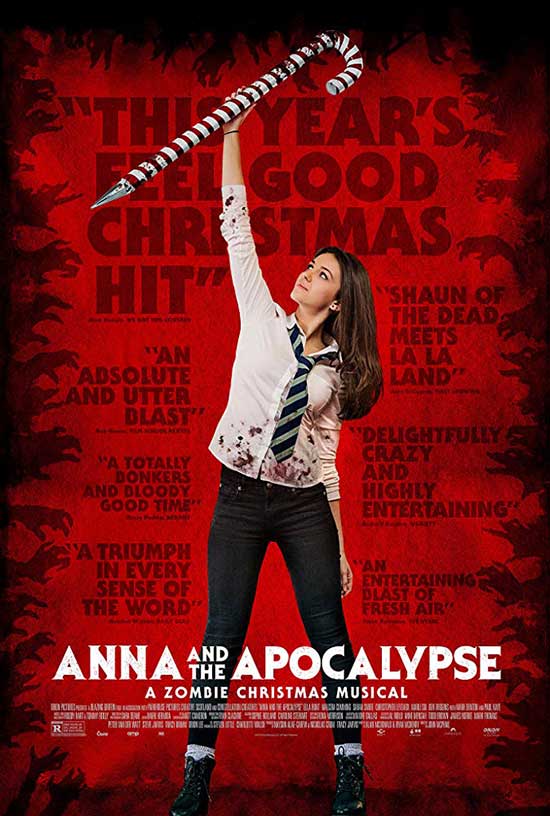 Anna and the Apocalypse (2017) is a Christmas-themed zombie musical from the United Kingdom. Adapted from a short by Vine sensation Ryan McHenry, who died of cancer in 2015 before the film’s completion, it’s the feature script debut from Alan McDonald. John McPhail (Where Do We Go From Here?) helmed the director’s chair, and music department vet Anthony Seyler (Black Panther 2018, La La Land 2016) helmed the production of the soundtrack. With a solid cast of old talent mixed with up-and-comers, offbeat humor and solid pacing, Anna and the Apocalypse ends up a pleasant oddity, despite hit-or-miss music and questionable dance numbers. 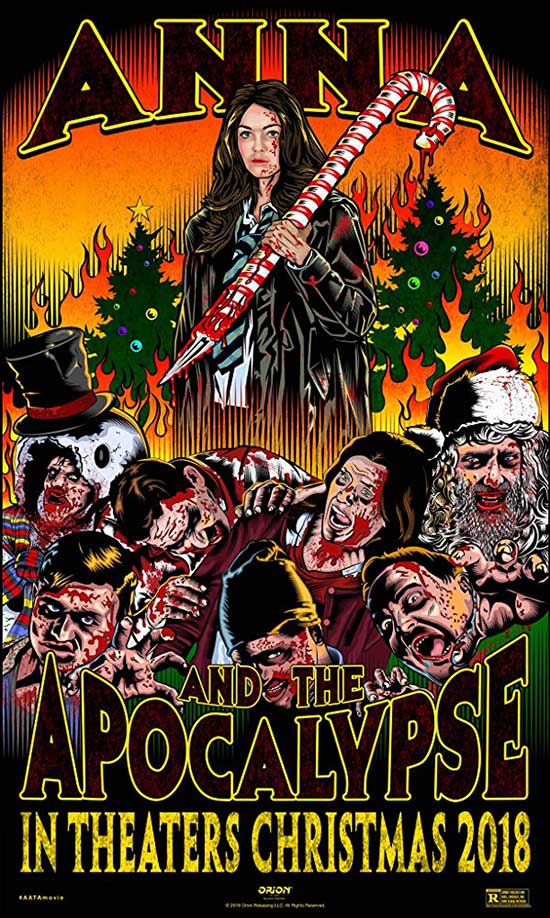 Despite its title, nothing about the film feels apocalyptic, and Anna’s one of the weaker players, despite being the titular lead. A title that better captured the actual spirit of the film might be “High School Zombie Musical,” or “Christmas Zombie Musical,” though those certainly would have relegated the flick to the VOD digital dustbin pretty quickly. As it is, AatA is a teen movie in feel, with a zombie outbreak around the holidays merely providing the backdrop.

For those turned off by that proposed combination, be at ease—there’s genuine humor (especially for fans of the Richard Curtis brand of U.K. haha’s) and some legitimate moments of emotion between characters, all of which fit well in the not-everyone-will-survive zombie formula. It’s impossible not to think of Simon Pegg and Edgar Wright’s brilliant U.K. undead-romp Shaun of the Dead when thinking of the British zombie comedies, and AatA does borrow a similar template for its own humorous horror tale. Like it’s more polished predecessor, AatA starts it’s first act with comedy, gets into the thick of the monster-killing action in the second act, and ends with tragic loss in its final stint. It’s a good map to follow, as the characters only remain safe long enough to make you care, making their departing by undead stragglers bittersweet. 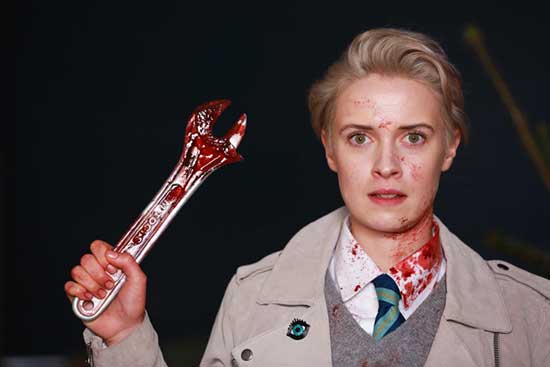 Leveaux and Wiggins are spot-on choices for their characters, too, but the shining stars are Sui and Swire, who steal the show whenever given a chance. Swire’s pixie-cut outcast persona comes through clearly in all the right ways and is sure to give anyone who had a crappy time in high school a nostalgia trip. Sui, whose character gets some of the least amount of screen time among the main cast, wins big with her sexual-charged yet hilariously-derpy Santa Baby-esque talent show number. Hunt is adequate in filling Anna’s shoes, but her dancing is weakest among those forced into musical scenes, and she suffers from the Twilight/Bella Swan syndrome—she’s the lead, but none of us can really figure out why. Kaye’s role as the powder-keg principal suffers similarly from a lack of character motivation, and what could be a Frank-N-Furter-esque rollicking villain role ends up underwhelming. 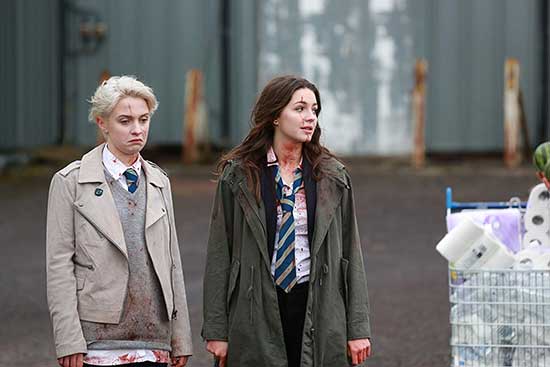 Where the acting and script come through as a win overall, the music is less successful. Of the maybe half-a-dozen musical bits, only two are real winners (Sui’s aforementioned love song and the bad-boy anthem headed by Wiggins). The dance choreography is clearly inspired by the Disney fads of recent memory (High School Musical, Camp Rock, etc.), but without the power of Mickey behind them, they come across as very amateur. When all is said and done, the movie feels like it isn’t a musical at all, and viewers are unlikely to have any of the tracks stick in their memory. Similarly weak is the Christmas theme. Sure, there are lights and candy canes, but without any recognizable jingles and a lack of holiday-references voiced by the players, there’s nothing about the flick that gives that jingle-bell vibe.

Regardless, Anna and the Apocalypse is still a good time. It’s briskly paced at an hour and forty minutes, and there’s enough laughter to keep those not inclined towards horror happy, while those looking for a body count won’t be totally disappointed.

It’s a good warm up for more hardcore holiday horrors like the Black Christmas films and the Silent Night, Deadly Night franchise. In other words, grab yourself some wassail and eggnog, and make it Christmas whenever by adding this picture into your holiday horror repertoire.