Entertainment Weekly had a chance to talk with “Community” show runner Dan Harmon about what fans can expect from Season Two’s Halloween-themed episode: “Knowing too much about this particular plot would ruin it, but I promise it’s an awesome, one-off crazy conceptual episode with plot points and effects that are more familiar to horror film fans than our show’s fans,” Harmon revealed last Friday on the ‘Community’ set. (As he was talking, a parade of costumed and bloodied extras marched through GCC’s hallowed halls, which were decked out with fake bats, chains, smoke machines, and various dismembered body parts.) “We’re going over schedule and over budget to get it right,” he adds. “I’ve had to promise to do a few what I call ‘Bottle Episodes,’ where the group never leaves the library, to make up for it.”

While we don’t know much more about the carefully guarded storyline, Harmon told EW that it does involve zombies in some capacity. Judging from the sound of things, it’s going to be an epic experience. For those of you who haven’t yet discovered the funniest show on television, be sure to check out NBC’s Season Two premiere tonight. And feast on this little promo for a glimpse at what was probably the greatest episode from last year. 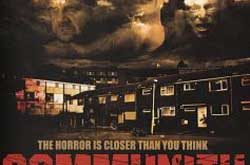