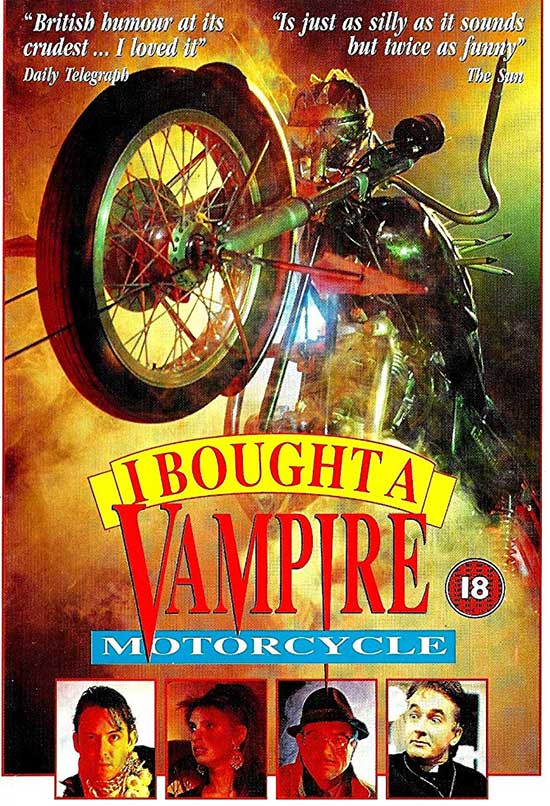 When a motorbike gang kills an occultist, the evil spirit he was summoning inhabits a damaged bike. The bike is then bought and restored, but reveals its true nature when it tries to exact vengance on the gang, and anyone else who gets in its way.

I’m not entirely sure my brain had completely recovered from having to review three Neil Breen movies when I ended up plopping down to watch I Bought A Vampire Motorcycle. It’s a film that shows up on a lot of people’s “Worst Movie Ever” lists, so I was fully expecting to experience a lot of pain if not a full-blown brain aneurysm. Maybe I was so bludgeoned by the terribleness of Breen’s works that my concept of bad had been redefined because I can’t say that I hated I Bought A Vampire Motorcycle as much as some others seem to. 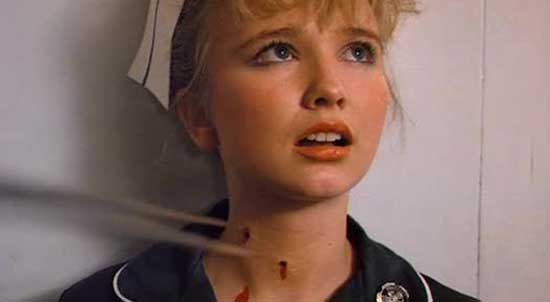 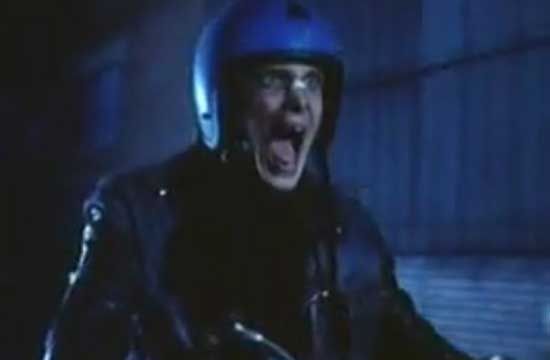 I can’t really say I liked it, either.

So, this particular cinematic crapsterpiece starts out with a gang of bikers killing another gang of bikers while they’re performing some kind of satanic rite. The head dude of the Satanists, as a last desperate act, lets the blood from one of his wounds drain into the tank of a damaged motorcycle. Through evil magic hokum, this caused the bike to become a strange, sentient, vampire machine that goes out killing folks at night as well as going after the bikers that killed the cultists at the beginning of the film. Noddy, the poor idiot that unwittingly bought the bloodsucker bike, is now trying to find a way to bring an end to the machine’s rampage.

This British contribution to B-movie cinema isn’t going to set the world on fire, nor is it going to be considered a forgotten gem of any kind. However, that’s not to say that there’s nothing to like. It had little touches, like the bike refusing to work or move whenever the sun was up. Some of the characters were kind of likable, which made a lot of the movie tolerable. Of course, I kind of felt like our main character, Noddy, was kind of an idiot, but not such a huge one that it made me hate him. The special effects were nothing much to write home about, but they were still done competently enough. There was a cheesy quality to them that actually added a certain charm to the movie. 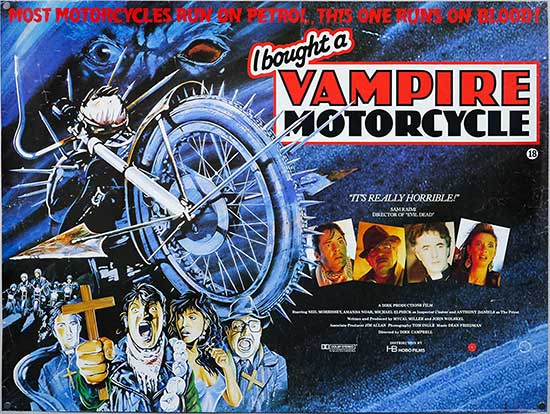 Heck, even the acting wasn’t all that awful. Not exactly award-winning caliber performances provided by the cast, but serviceable enough that none of the actors actually take you out of the film because they’re that bad. Most of the cast wasn’t made of recognizable names, with the only exception being Anthony Daniels. If you don’t recognize the name, you’ll know him better as C3PO from the Star Wars films. However, he’s not a particularly good actor, so don’t expect him to knock your socks off here. 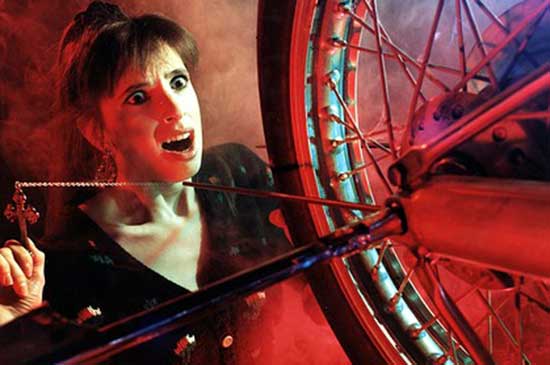 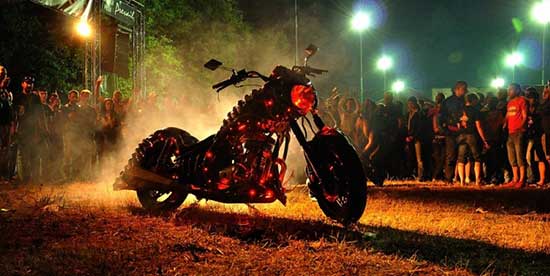 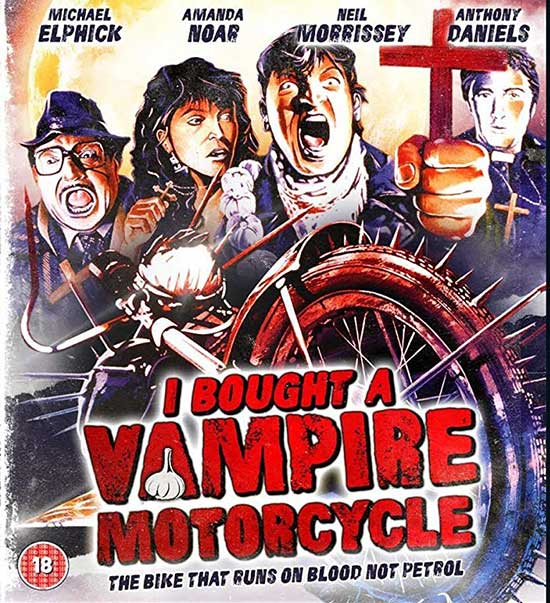 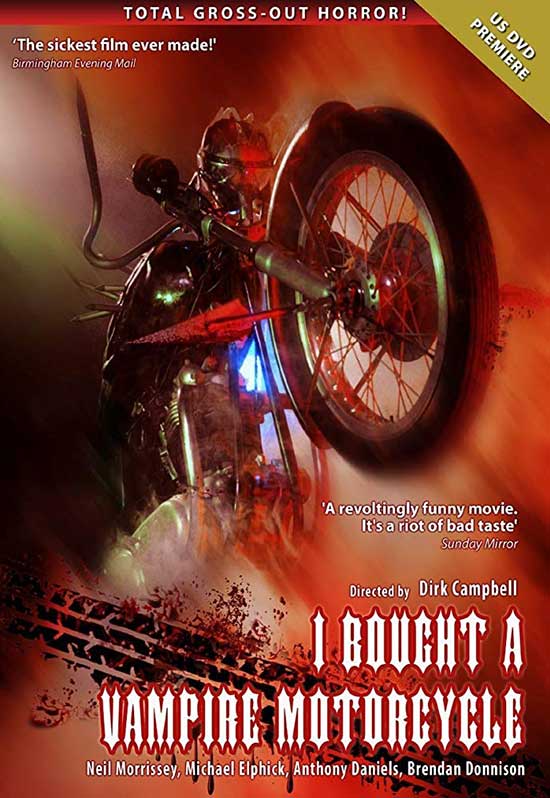 So far, it may sound like it’s not that bad of a film. However, that really depends on your tolerance for the main concept, which is admittedly kind of stupid. Granted, this film was meant to be a horror comedy, so the concept of a vampire motorcycle that is capable of draining blood from a victim through tubes it extends into their necks wasn’t meant to be taken seriously. The unfortunate thing is that for the movie to work, it really needed to deliver on at least the comedy aspects if not the horror. Unfortunately, it doesn’t. The jokes and gags spread through the film weren’t particularly funny or just fell flat due to poor execution. I normally love British humor, but for some reason, it just didn’t click for me here. I think a lot of that has to do with the fact the fact that a lot of the jokes were a little too obvious, so you can predict the punchlines before they happen. 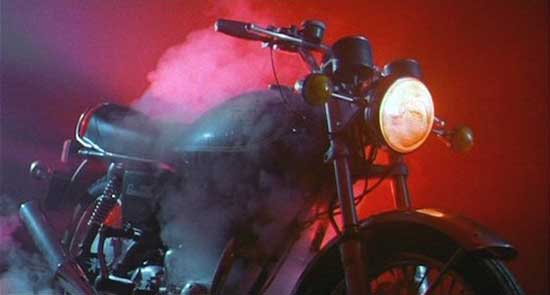 The movie doesn’t exactly work as a horror film either. It does have some gore that was pretty effective, but the movie doesn’t provide much in the way of scares. That has a lot to do with the motorcycle isn’t exactly scary, and a lot of its antics comes across as too silly to be taken seriously. I actually ended up laughing the first time I saw the motorcycle pin someone against the wall and then extends these rubber tubes to their neck. I will say that when it started to grow out metal spikes it did look a bit more menacing, but that’s far as it goes. It just didn’t have the same absurd yet awesome aspect that Piranha II’s flying piranhas had to make up for its lack of frights. It did come close when it started sprouting spikes though. 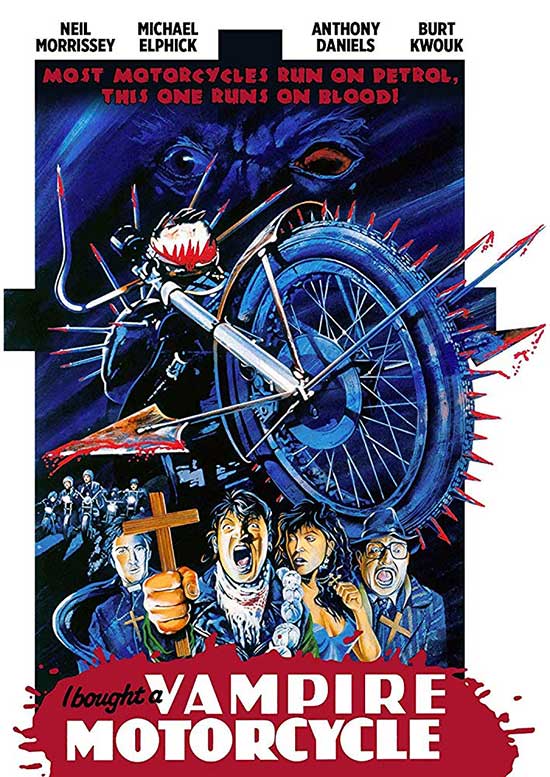 I Bought A Vampire Motorcycle wasn’t what I’d consider a good movie. However, it has enough of a weird charm of its own that it manages to be entertaining. The only time the movie is funny is when its unintentionally so, and isn’t particularly scary. It’s at least a silly movie that knows it’s a silly movie, so you get the feeling no one is taking it too seriously. It’s one of those films where it feels like people were just having fun and going with the concept, and I think that comes through. It’s part of why I think I found it more amusing than I should have. Is it something I recommend to others? Not so much.