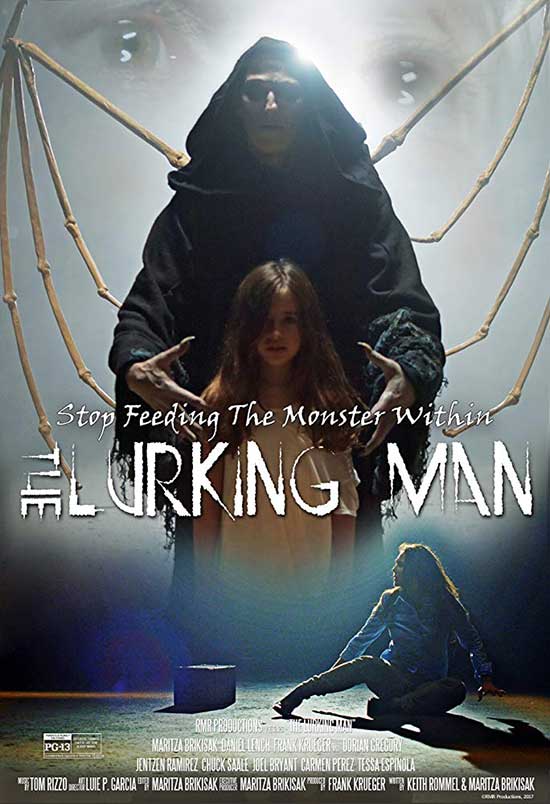 ‘Cailean’ started drinking very young in an effort to forget a childhood trauma. She became a functioning alcoholic. She had a happy family and life until one day an accident in the playground took her control away. Her drinking is now destroying her and her family. Her attempts to recovery continue to fail, the last one sends her to the ER and is now on her deathbed. ‘Death’ has been watching her all her life and now sees this as an opportunity, breaking the rules he takes her soul before she dies hoping that by exposing the forces that manipulated and consumed her soul, will convince her to accept his offer

Had the pleasure of checking out a new film last night by the title of “The Lurking Man“. Now before getting the review, I will state a few things to consider. This film is a low production film and despite being categorized under horror leans more towards drama and supernatural. With that said, the film maker did a clever thing here that does in fact work for this piece. The set designs were kept to local settings and houses, while using a single lighted room for the supernatural portions. In reflection, I came away thinking, yes, the simplicity of it does work without need for elaborate Hollywood productions. Not all films are appropriate to this statement, though, “The Lurking Man” is.

“The Lurking Man” is based on a novel per author Keith Rommel, with screenplay written by main focal actress Maritza Brikisak (role of Cailean). 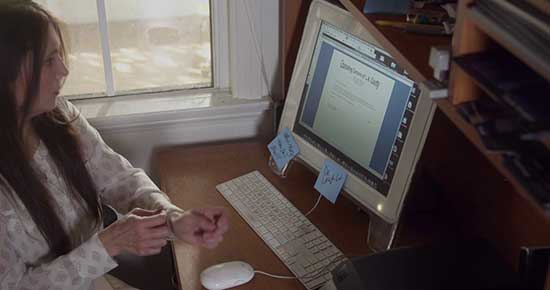 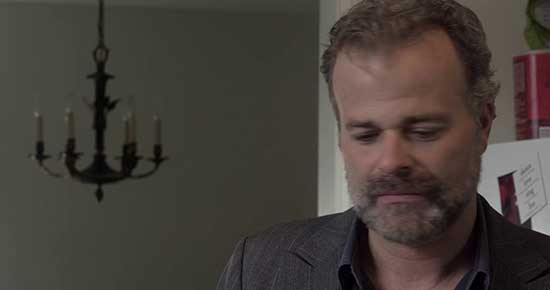 The film “The Lurking Man” is primarily centered around the adult life story of character, Cailean. Cailean is revealed to have died recently after a rather rough bout with life and its many demons. To be more specific, Cailean finds herself in purgatory now under the judgement of one of the 7 fallen angels, by the name of Sariel (Daniel Lench). Sariel is in fact one of the afterlife legion, who’s primary role seems to be as the acting “Death” figure in charge.

Now I am going take quick liberties here to include a small Wikipedia snippet:

In 1 Enoch, there is a fallen Watcher named Säraquyael (Amharic: ?????) and Säräqael (Amharic: ?????) one of the seven holy angels who is “of eternity and trembling”. In Kabbalistic lore, he is one of seven angels of the earth. Origen identified Sariel as one of seven angels who are primordial powers. In Gnosticism, Sariel is invoked for his protective powers. He is commemorated in the calendar of the Coptic Orthodox Church on 27 Tobi in Coptic calendar.

I thought this snippet was important, as I was not as familiar with this entity by name. This bit ties in it’s reported historical supernatural affiliation. 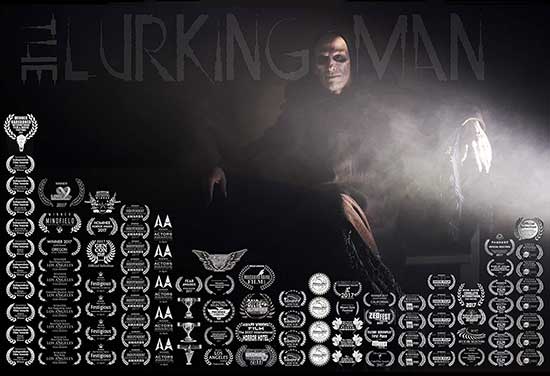 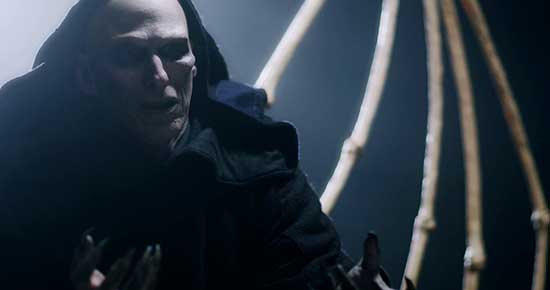 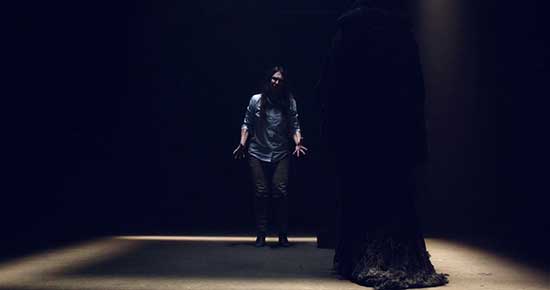 Digressing back to review, actor Daniel Lench does a really great job here as the fallen angel, Sariel. Funny enough, at first his voice reminded me a bit of Martin Short (and thus later becoming more dynamic in his monologues). In general, Lench has great presence and character adding a strong presence to the entity. The makeup/special effects work on was perfect (in my opinion), while still being ominous, simple, and yet sophisticated in its reveal of Sariel’s later-revealed portions.

The story goes….Cailean is now taken back to recall her past life and recent circumstances leading up to her death. Cailean, a divorcee finds herself now living alone, dealing with an alcohol addiction and a tarnished life brought on by her inner demons. In fact, more literally, she is under the influence of a demon that appears to keep her on the path to making bad life choices. In the wake of all this she has a son by the name of Beau (Jentzen Ramirez ) who is now living with her ex, Wilson (Frank Krueger). Wilson is a daunting, caring father who wishes nothing more than to see Cailean on the road to recovery and rejoined with her son. Meanwhile Cailean who is now trying to get on with her life, spends her off-time with new acquaintance Emerson (Dorian Gregory ), who despite being kind, seems to be enabling her more than helping.

There is no need to summarize the entire film as the movie is designed to be a reflection drama intertwined with the aftermath of after life. The dynamics of this flashback/present presentation works much like you would expect a Scrooge film to play out recalling the misdeeds of a former life. 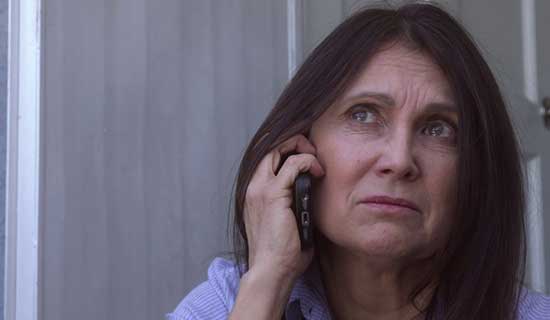 In the end, there is a purpose to all of this (which really was a highpoint for me). By that, I mean the story has premise and direction rounding everything off to a piece of great story telling.

Now I couldn’t review this film without pointing out the great performance by lead Maritza Brikisak. Maritza is challenged with taking on most of the major dialog and dramatics in this film resulting in a highly diverse set of skillful executions. 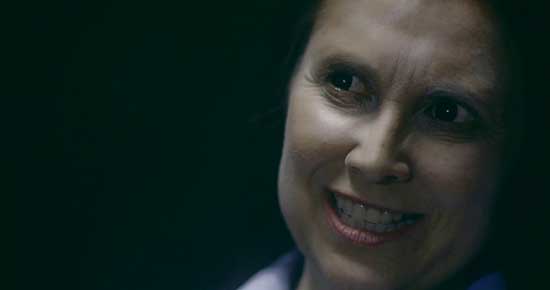 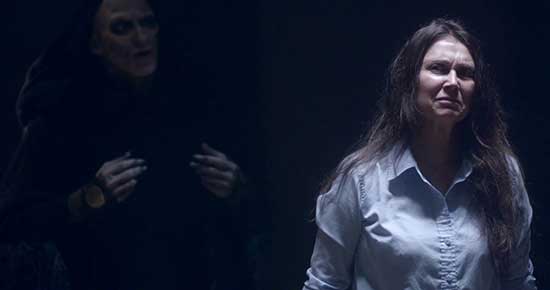 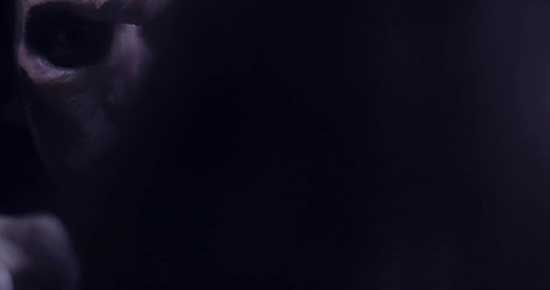 Maritza is tasked with many of the dramatic moments that provide character foundations in sadness, depression, loneliness, confusion, regrets, anger into to moments of hope and resolve. It’s a solid round of performances that ignite the screen.

I firmly believe that not all films have to float on big budgets to be deemed a success. Moviegoers prefer that for visual aspects, but even in that sense, not all films with budgets tell a good story. “The Lurking Man” does, and that’s all that really matters here.

The supernatural elements were inspiring enough that I’d watch this film again. My ultimate takeaway here is that this same story “could be” taken to a next level …if so deemed and appeal to larger venues. Though not a show-stopper if not.

Great job to the team, actors and film crew…….I firmly enjoyed this one!
(also….love the poster!)