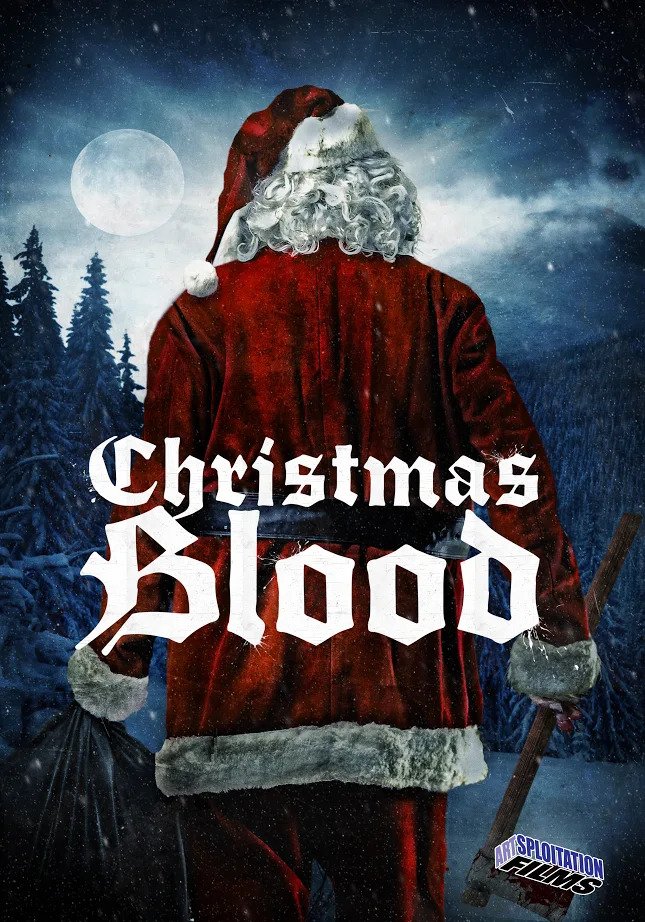 A group of female friends celebrating the holidays together are terrorized by a homicidal maniac in a Santa Claus suit on Christmas Eve.

Off the top of my head I can think of several Christmas-themed horror films that feature some whacko dressed like Santa Claus who enjoys spending the holidays hacking people to pieces. Some of them, like Silent Night, Deadly Night and Christmas Evil are quite good while others leave a lot to be desired. Christmas Blood is the latest film to feature a killer Santa Claus and while it may not be as awesome as Silent Night, Deadly Night I still thought it was a fun little movie that works for several reasons and helped put me in the Christmas spirit this year. 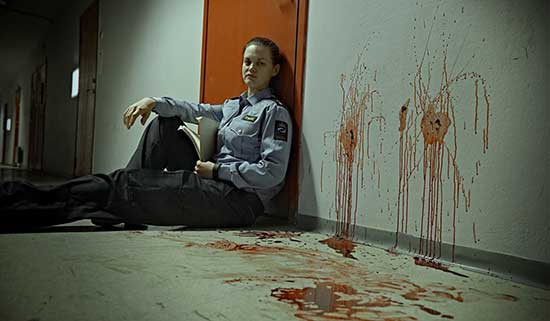 The premise may not be the most original in the world, but I still enjoyed it. We have an escaped mental patient running around dressed like jolly old Saint Nick chopping up people left and right with an axe while a couple of detectives try desperately to stop him before he ruins anyone else’s Christmas. In a lot of ways, it feels like Halloween as the film’s antagonist is like Michael Myers in a lot of ways. Not only is he a mentally unstable guy that likes killing people, but he also has an almost supernatural feel to him like Michael does (not to mention that he is focused on killing one character in general sort of like how the Shape is always obsessed with taking out Laurie Strode). Not only does Christmas Blood have a nice Halloween-like vibe to it but it just feels like an old school slasher flick in general and if you ask me that is always a great thing. In many ways the movie is an awesome combination of Halloween, the original Black Christmas, and Silent Night, Deadly Night and since I love all three of those movies, I really dug Christmas Blood as a result. 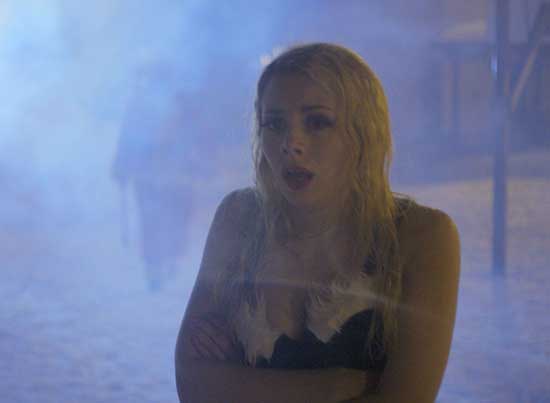 I liked the fact that the killer Santa Claus in the film has been active for many decades and even has a list of people that he wants to kill (which is found in the mouths of one of his victims). We have two detectives that have been trying to stop him for years (which also adds to the Halloween vibe as they are almost obsessed with him much like Loomis is with Michael). The fact that the killer has been doing his thing for a long time and has targeted certain people was a nice touch in my opinion as it gives him a little more depth instead of having him just go out and kill people at random without any rhyme or reason. Don’t get me wrong, he does slaughter anyone he comes across that aren’t on his list too, but I liked the idea of him picking out particular victims and slashing them to pieces for his own demented reasons as well (plus I love the fact that the people investigating the murders discover that the killer’s pattern of victims look like a Christmas tree as I thought that this was a cool idea too). 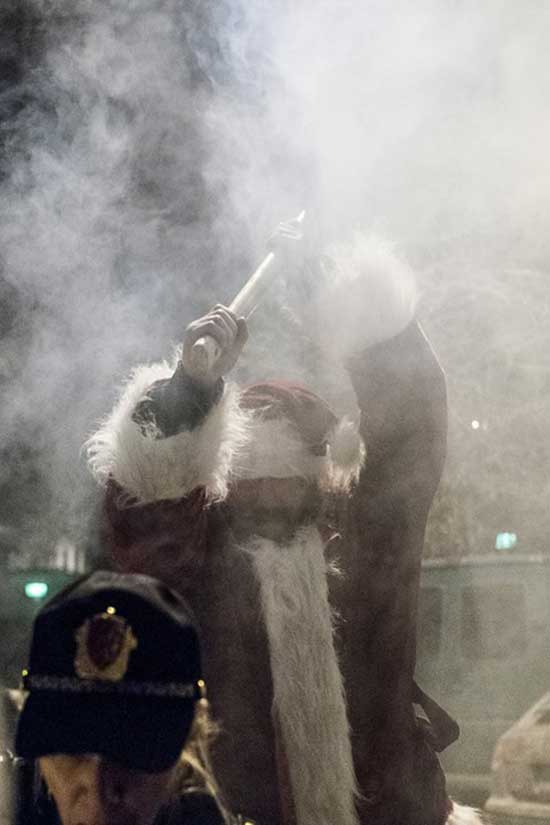 I was also happy that the movie has an impressive body count and most of the death scenes are nice and bloody. Santa isn’t playing around here and is obviously enjoys taking out his victims with his axe. Since I love blood and guts, I wasn’t let down and I had a blast watching Santa go to work. I also dug the fact that it looks like the filmmakers just used practical effects as it doesn’t appear to be any crappy CGI anywhere to be found here (which is always a good thing). My only complaint when it comes to the death scenes though is that there could have been a little more variety. Don’t get me wrong, I am always up for a good death via axe scene, but it does get a little redundant after the first two or three and I wish that they had him dispatch of his victims in a different way every now and then. Still though, I did have a lot of fun watching him go to town with his axe though, so I guess I shouldn’t complain.

The only downside to the movie is that it takes things a while to get going. We do get a double murder scene in the beginning, but it is painfully slow and goes on for way too long before the people are killed off. The movie then sort of meanders on at an extremely slow pace for a little too long for my liking until Santa starts taking people out left and right and I think that a lot of the stuff in between could have been trimmed out just to help things flow a little better. At times it seems like there is way too much plot getting in the way of the story and I can see where some viewers will be turned off by this. I also think that there may be too many characters and a little too much character development at times, but I was able to overlook it because I knew sooner, and later Santa was going to show up and start hacking and slashing his way through most of the cast. I just wish that he’d gotten started a little sooner as there are a lot of bland scenes that could have been taken out before all the blood shed really gets going that take away from the movie in general. 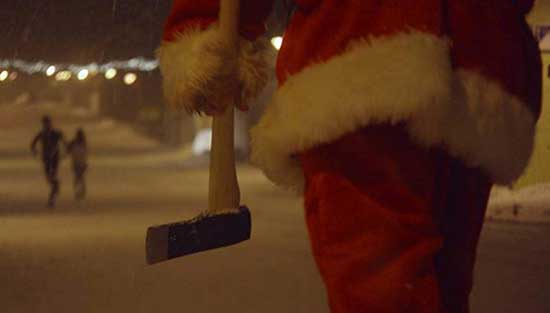 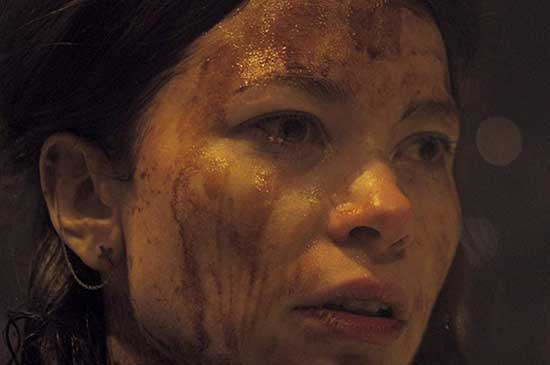 Overall, I enjoyed Christmas Blood. As I said earlier, I am always up for a good killer Santa Claus movie if it’s done right and I feel that this movie is an example of that. While it isn’t without a few minor flaws I still thought that it was quite awesome, and I was able to overlook them. If you’re looking for a new Christmas-themed horror flick to watch this year during the holidays look no further than Christmas Blood. I’ll admit that it may not be for every taste and pales in comparison to classics like Silent Night, Deadly Night and Black Christmas but it is still a lot of good, bloody fun and just a cool little slasher flick in general. Check it out when you get the chance, I think you may be pleasantly surprised.