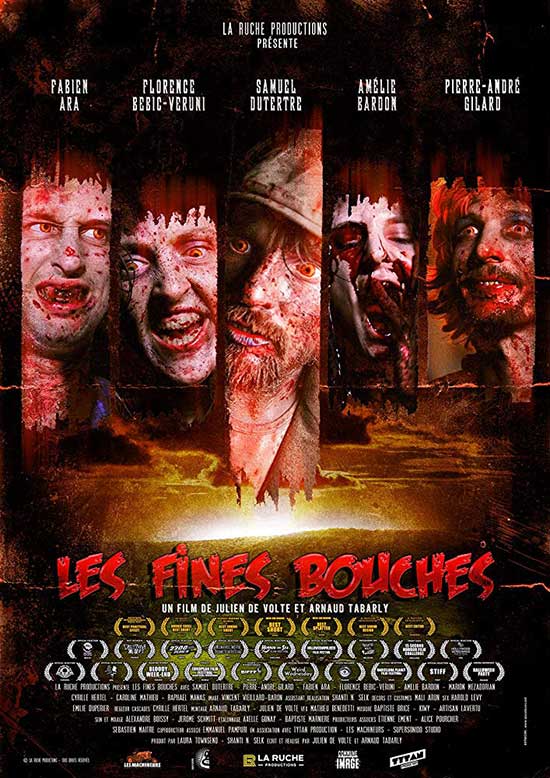 A zombie family happily lives in the countryside.

Les Fines Bouches (aka The Foodies, but technically translated from French as The Fine Mouths) is a short film by the French writer/director team of Julien de Volte (see also his previous short film, Peine de Mort) and Arnaud Tabarly (started in visual effects, he has more recently also worked with de Volte as co-writer/co-director of Super Z). It was filmed back in 2014, but it wasn’t until 2017 that it really started making the rounds on the festival circuit, finally reaching the United States in 2018 when it played in Seattle at the Crypticon Film Festival. And while de Volte’s previous film was dark and gritty with a somber tone, this one is more like a circus meets a sitcom in the messiest corner of an abattoir.

This is a darkly comedic short, one you’d almost expect to have a laugh track along with a cheesy, Leave it to Beaver-style soundtrack. And it’s about a bloodthirsty family of zombies who just want to sit down with a good meal. Of course, we know what a “good meal” means for a zombie family, so it’s not surprising that their house is covered floor to ceiling in blood and limbs, and the fridge is full of decapitated heads. We open with Yvon (Fabien Ara), sucking blood and gray matter from a head, then spitting in disgust, to which his mother, Stephana (Pierre-Andre Gilard), apologizes and explains that times have been tough. Lucky for them all, Dad (Gertre, Samuel Dutertre) and his two daughters, Marcelline (Florence Bebic-Veruni) and Georgette (Amelie Bardon), bring home a freshly killed body. And so that night at dinnertime, a good meal is finally had – blood and guts are abundant, and the victim was pregnant, so Gertre gives the fetus to his wife as a treat.

Things take a turn for the worse later when Georgette and Marcelline, having been given the okay to hunt on their own by their dad, come across a potential victim snoozing near his tractor. The girls become distracted when they notice the bottle of booze next to him, and instead of bringing home a fresh kill, they come home drunk. Disappointed, Gertre decides the whole family should go out together, all five of them, and see if they can do better as a team. But the food they find doesn’t want to be eaten and puts up quite a fight.

Les Fines Bouches manages to balance the humor with the bloodshed just about perfectly, striking a note that has a very New Zealand/splatterpunk feel to it. The short 17-minute runtime is absolutely packed with splashing blood and flying body parts and chomped organs as well as a ton of laughs. And underneath it all, there’s a subtle, twisted vibe that almost reaches Calvaire levels of disturbing, and no doubt would if not for the slapstick chaos that acts as a thin blanket over it. A lot of credit is due to the under-celebrated folks in makeup (Harold Levy, who has also worked with Uwe Boll in the past, and Emilie Deperier) and visual effects (Mathieu Benedetti and Arnaud Reguigne) for making this film look as crazy as it does.

French horror films are most often known for their intensity and extreme levels of depravity, both physical and psychological – films like Martyrs and Twentynine Palms aren’t usually described as “hilarious.” So Julien de Volte and Arnaud Tabarly’s short film, Les Fines Bouches, stands out among the crowd, if for no other reason than it changes gears from what we might expect. It’s a great piece of filmmaking, it’s disgusting and graphic, while never taking itself too seriously, and it’s both fun and genuinely funny, at times no doubt causing the audience to question themselves: Am I really laughing at a dead baby right now? Yes, you are, and Stephen Biro would be proud of you.