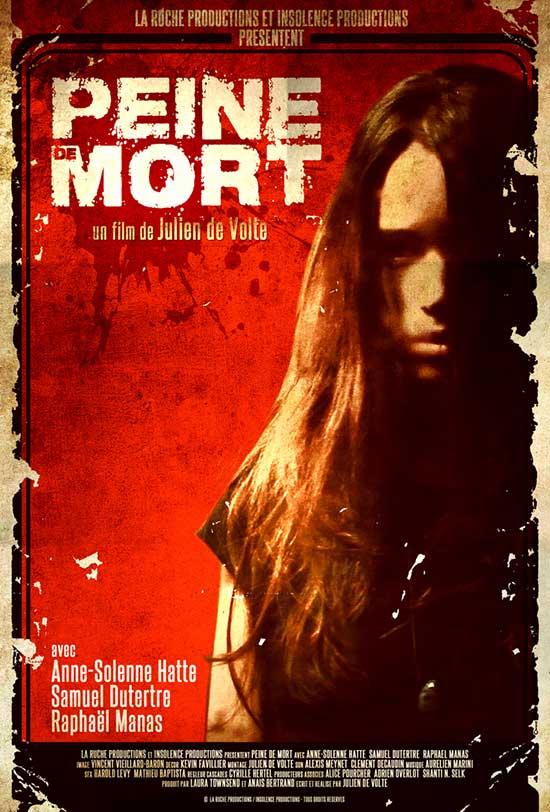 Memories of a young woman: when she returns home, she is brutally assaulted by two men. Shattered, she hesitates, then chooses the path of vengeance…

Peine de Mort, which translates to Death Sentence in English, is a short film by French film writer/director Julien de Volte (he’s worked on a couple other short films as well as the upcoming full-length horror/comedy Super Z, which is being compared to Dead Alive and Gremlins). While only weighing in at around twelve minutes long, and that’s including closing credits, this is a short film that manages to pack a whole lot of punch into a very small amount of time.

Falling into the controversial rape-revenge subgenre, Peine de Mort begins with a shot of a nondescript forest. From off screen, we hear the sounds of someone crying, then a loud gunshot, and then we cut to a body completely out of frame aside from an extended arm covered in blood. De Volte opts for an approach similar to that used in Noe’s Irreversible, where the end is shown first, and then the film travels in reverse to show what happened just before, and so on until the end of the film, where we are shown the end of the story, but from a different point of view, and we know what happened just off screen in the opening minutes. It’s probably less confusing than that description makes it out to be: at no point while watching the film did it seem lost or confusing.

The story here is fairly simple, one that we’ve no doubt been over quite a few times before. A woman (Anne-Solenne Hatte, who has worked her way up from a bit part in Ocean’s Twelve to featured roles in her most recent work) comes home to find that not only has her place been trashed and possibly burglarized, but the men who did it (played by Samuel Dutertre and Raphael Manas) are still there. They taunt her, attack her, and beat her before pouring bleach on her face and then raping her. Whereas many rape-revenge films spend a lot of time on the rape scenes, getting every nasty angle and close-up shot possible, Peine de Mort takes a different approach – we know the men are going to rape the woman, but they slam the bathroom door in our face before they do it, and leave it to the audience to fill in the blanks with their imagination. And this, then, explains why in the scenes before (which we know chronologically happen after this one) this woman is brutally torturing these men.

For the most part, Julien de Volte’s film doesn’t break any new ground – it’s a familiar story with a slight twist at the end. What sets it apart is the formula that de Volte utilizes to tell the story, one that could be called the “kitchen-sink” formula. We open with the ending, employing the in media res technique, then work in a flashback-ish reverse chronology. We have a found-footage style scene in which we see everything from the perspective of the video camera the protagonist has used to film herself torturing one of her attackers. And de Volte even throws in a bit of black and white footage when he shows us the actual beginning of the story.

Peine de Mort is not only a technically sound film, but it is a fairly brutal one as well. The physical brutality inflicted as revenge on the attackers by the woman is pretty intense. One is tied to a chair and tortured, his fingernails pulled off slowly with a pliers before he is hit over and over with a hammer. She takes a saw to his limbs just before we cut away to leave his fate a mystery. The other guy is beaten to a bloody pulp via log and fist, and the camera stays on this for a while. And this is on top of the psychological punishment inflicted on the woman and, of course, the acid-splashing and implied rape. Not a happy movie here.

Julien de Volte has a style very much his own, and luckily he is able to avoid the “style over substance” criticism here by telling a good story with a somewhat surprising ending. The only criticism here has little to do with the filmmaker himself, or even the actors, and is more of a silly little thing than a real complaint anyway. Whoever did the subtitles did not proofread their work. There are little mistakes here and there (remember, this is only about twelve minutes long, with very little dialogue to begin with), but I couldn’t help giggling a little when, during the intense home invasion assault, one of the men says, “F*ck the shut up!” to his victim. Not enough to wreck the movie, but enough to take you momentarily out of an otherwise gruesome scene (maybe that’s a good thing?). Overall, Peine de Mort is definitely worth a watch, and highly recommended for fans of films like I Spit on Your Grave and Thriller – A Cruel Picture, or really for anyone who loves to see the bad guys get what’s coming to them in the end.