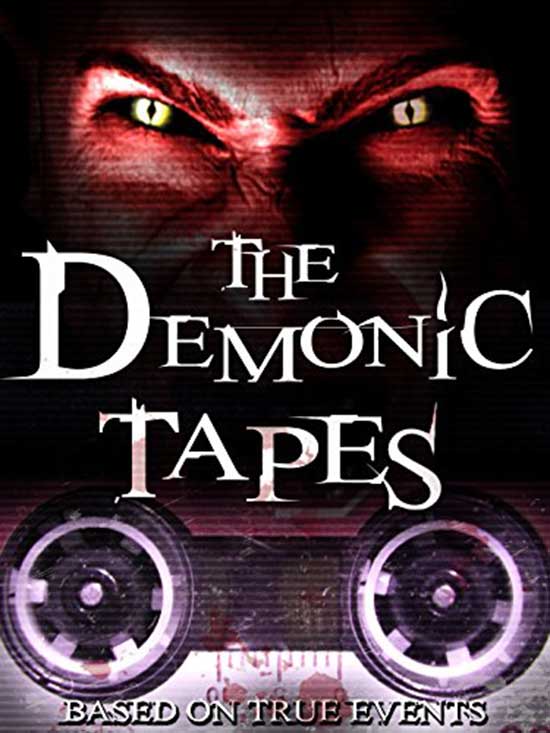 in 2007 a series of tapes were found in the basement of a London house. The tapes contained recordings made by a well known medium right up to the time of her death. She recorded the voices of the dead, one claiming to be the Devil himself. Based on true events.

Have you ever wanted to watch a movie about a guy who wanders around listening to tapes? No, seriously, an hour and 20 minutes of pretty much one dude. Listening. To. Tapes.

You have? Well, then, hot diggity, I have just the movie you’ve been waiting impatiently for! Step right up and help yourself to a steaming cup of “The Demonic Tapes”. Okay, it’s a bit tepid. Really tepid. More tepid than you might like.

I can’t even really go over the events of the movie because nothing really happens. A guy finds a box of tapes in the basement of the house he lives in. After a ghostly voice tells him not to listen to the tapes, our utterly dull main character instantly starts listening to the tapes. He sits and listens. He lounges and listens. He goes outside for a walk and listens. He pets the cat and listens. In one nerve-jangling scene, he accesses the internet and Googles the name of the medium on the tapes. The action and tension are overwhelming as he sips his tea (touch of milk and two sugars) and stares at the computer screen. Then he listens to more tapes.

There is a rather odd sub-text to the film. It seems the main character has an aversion to the phone. Every time it rings, he stares at it as if it is an escapee from a Cronenberg body horror movie. Considering how filthy the phone is, he might be on to something. To be honest, I almost thought they might go the route of him imagining the whole thing because of losing touch with reality while alone during the holidays. Kind of male spin on “Repulsion”. No such luck.

Ultimately, he starts hearing things from the tapes even when he isn’t listening to one (which isn’t often). Well, at one point, the medium states that she is binding the spirit to the tapes and that the tapes should not be listened to, and that is early on. Our main character ignores that rather blatant warning as well. We know he has unleashed this demon. Where do you really see this going? Do you think he is going to save himself or the world? He can’t even bring himself to answer the damned phone or the door; do you really think he’s gonna fend off a cliched demon?

If you can’t figure it out, let me make it clear. The filmmaker could have made a movie about the events that took place on the tapes and for pretty much the same price as the film he ultimately made. The demon could have easily been shown in shadow to save money as well as provide visual tension. They literally have a person under a sheet playing the demon in its Mr. Sheets incarnation. They could have made a fairly watchable spin on “The Conjuring”. Nope. Instead, let’s watch a guy who probably escaped from a Belle and Sebastian song as he wanders aimlessly listening to the audio track from the better movie that we didn’t get.

To be fair, the movie is not bad so much as it is painfully dull and rather pointless. It is pretty much the same as going to the theater to see the latest blockbuster only to find it is just the audiobook of the blockbuster.

If you have Amazon Prime and you really have the need to spend 80 minutes watching some guy fart around a house while listening to a medium argue with a demon who sounds like your chain-smoking mother-in-law, then give this movie a shot. Otherwise, go watch “Repulsion”; it’s a great movie.