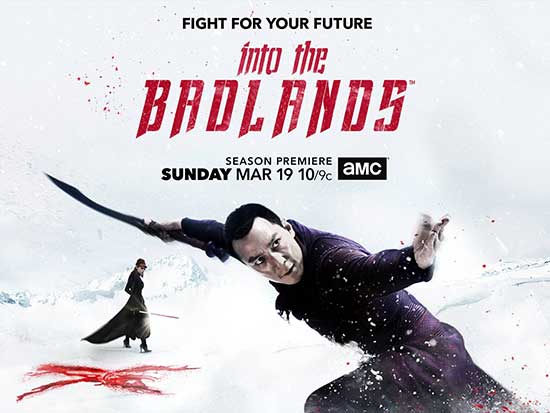 Season 2 finds Sunny (Daniel Wu) and M.K. (Aramis Knight) separated and scattered to the wind, each imprisoned in unlikely places. While M.K. struggles to control his powers, Sunny is determined to fight his way back into the Badlands to find his family or die trying. On their journey, Clipper and Colt are assisted by mysterious new allies whose motivations may be anything but pure. Meanwhile, the Widow (Emily Beecham) continues to consolidate power against the other Barons, while a dark and mysterious threat prepares to exact revenge on them all. Alliances are struck, friendships betrayed, and by season’s end, Sunny and M.K.’s lives will be forever altered with devastating consequences.

It gives me great pleasure to review and welcome in season 2 of the AMC series “Into the Badlands”. For those who wish to read my first season review you can access Into the Badlands Season 1 review here.

“Into the Badlands” was officially renewed for a 10 episode season which began in March of 2017 with a 3rd renewal scheduled for April of 2018. In short, this is a well liked series that rides under the coat tails of other popular AMC shows such as the Walking Dead franchises (but has nothing to do with them as a premise). 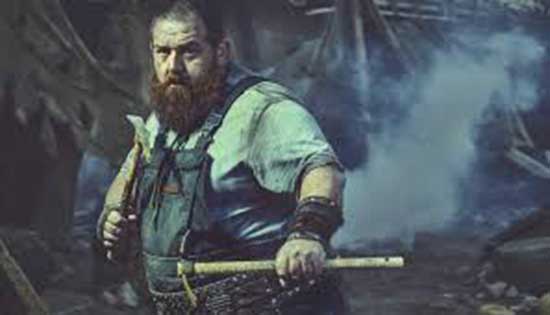 Described as an action, adventure and drama series, “In the Badlands” is all that and more taking on a single alternate universe within itself that mixes the best of martial arts films, old westerns, Asian dramas and quite frankly an atmosphere that feels more like Mad Max territory than anything. It’s a story that takes us into a post-apocalyptic world 500 years after a major war that left most of the country in desolation and chaos. The major areas are ruled by barons and protected by “clippers” (highly trained warriors). The population has transformed into what the filmmakers called a ” a feudal society” that is set in what we assume to be former US territory. The area if which this story takes place is named the “Badlands” of which these barons war over territory, land, and materials often using trade as a way to keep peace. Many have gone into slavery overpowered by the barons and their clippers and thus named “cogs”. The rules have changed for society with clippers being forbidden from marrying and guns taking a backseat to older weaponry such as swords and blade. This in a nutshell is the world of the Badlands.

In review, it does take a few episodes for viewers to get the “feel” for this unique story and its self contained universe, though what propels this series is old fashion, down and dirty martial arts play mixed with savagery, one on one battles, and the constant fight for survival. Nomads exist outside the camps (and control of barons) who survive much into the same way as you might find in the Mad Max franchise films. Pirates, thieves, bandits and assassins intermingle making for a brutal way of life for those still in existence. The general idea of expert fighting prow ness appears to set the foundations for respect and survival among peers and opposers. 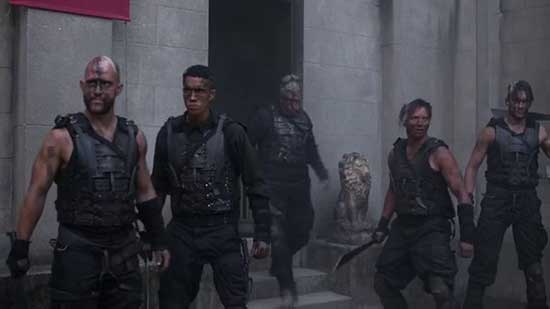 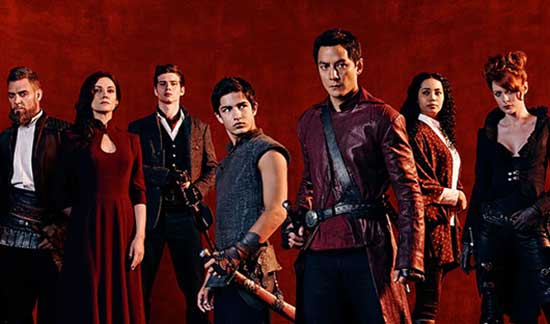 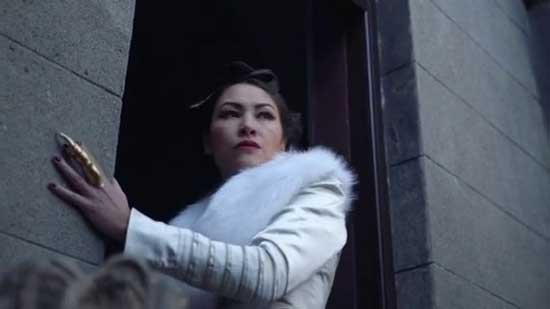 Daniel Wu as Sunny, Regent (Head Clipper) and former warrior under Baron Quinn is our main focal point character who we find in season 2, 6 months later slaving away as a “picker”, (a miner assigned to o slave labor). Sunny, a massively skilled warrior plots his escape with the aid of befriended Bajie (Nick Frost) who despite betraying Sunny, still manages to tag along for a stroll across the Badlands. Bajie (Nick Frost) provides this season’s comedic edge with his British John Candy-like presence.

As expected between subplots playing out we get a smattering of martial arts combat sequences that range in dynamics comparable to that of a cross between “Kill Bill” and “Crouching Tiger, Hidden Dragon” styles. The wire work here is impressive and slightly comedic in its disbelief while the carnage is bloody, viscera, and applied with skill and conviction. Though that takeaway here is that is just damn fun to watch!

The Widow (Emily Beecham) also known as Minerva and her daughter Tilda (Ally Ioannides), make for a lethal femme fatale that rush thru their with grace, brutality and skill. Tilda is revealed as The Widow’s adopted daughter and highest trained assassin (later also becoming her “Regent”). 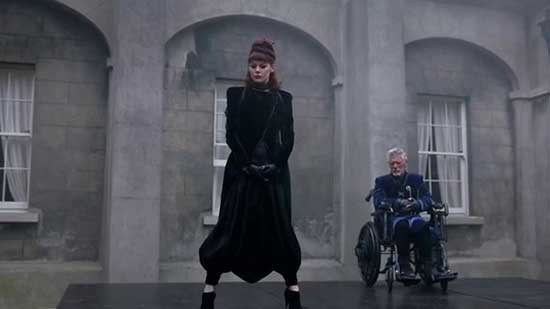 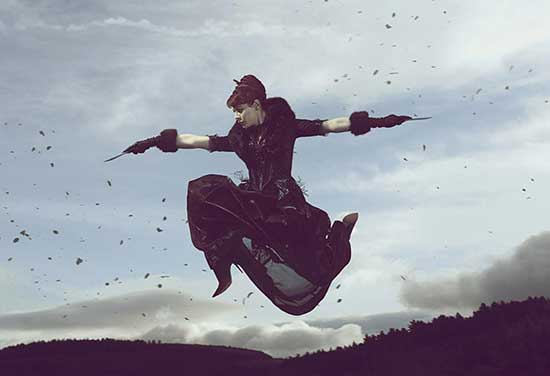 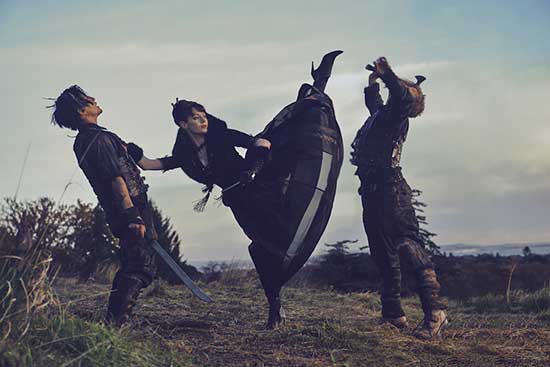 In the Badlands is a series chock full of subplots, betrayals, and surprises. In fact the number of backstabs and alliances that occur during this season really make you wonder if all the characters of this universe are just bat shit crazy. To review the season is to introduce spoilers, so if you plan of giving it a go, you might want to stop here before we start shooting REVEALS at you.

The season consists of 10 episodes that primarily rest upon main characters, Daniel Wu as Sunny, Marton Csokas as Quinn,Aramis Knight as M.K., Emily Beecham as Minerva and Nick Frost as Bajie. Supporting characters here include: Ally Ioannides as Tilda, and Madeleine Mantock as Veil.

As beautiful as ever, the production moved its filming location to Ireland this season for its vast scenic spots and wasteland type expanses driving home the realism of the time periods and culture presented.

With Daniel Wu central to the story and his quest to find his family, the series did allow many of this characters to expand on their back stories and current life struggles. 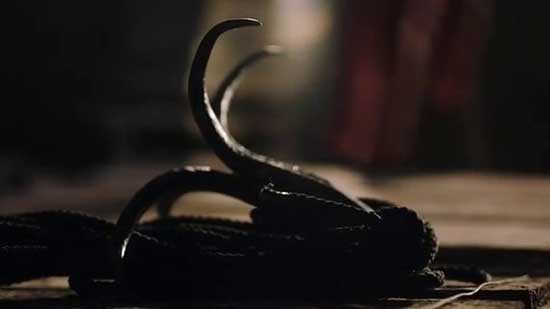 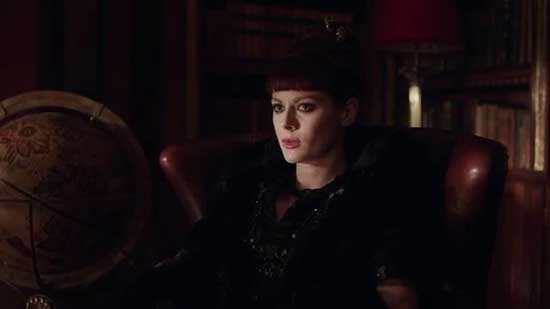 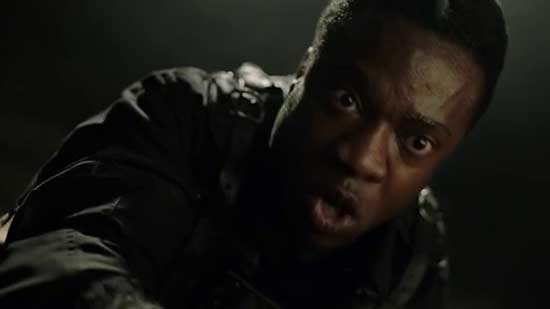 This season we learn that Quinn is still alive and has rebuilt an army in a underground bunker. Now even more twisted and dark tempered than last season, he has claimed Daniel’s wife Veil as his own in addition to assuming fatherhood of their son Henry. Minerva (The Widow) has become obsessed with power at the cost of betraying everyone around her. Her obsession has ultimately become a soulless quest for dominance. We do get more back story on Minerva who is also revealed by another nickname, “flea”. In the distance, Sunny moves forward trying to make his way back to Veil and to reclaim his wife and child. The league of Barons gather to form and determine alliances. Aramis Knight as M.K, spends time with the Abbots (a mysterious mountain cult lead by the “Master” and trained in martial arts and weaponry). He discovers the source of his bizarre power and the shared affinity with its students.

Main takeaways from this series include incredible action fight sequences, a bold inventive plot line that almost ranges on science fiction and a stunning cast of actors and characters that keep things moving the whole way. I am excited to see season 3 on that note while there is plenty here for fans of action, apocalyptic settings and feudal environments to fill your time with.