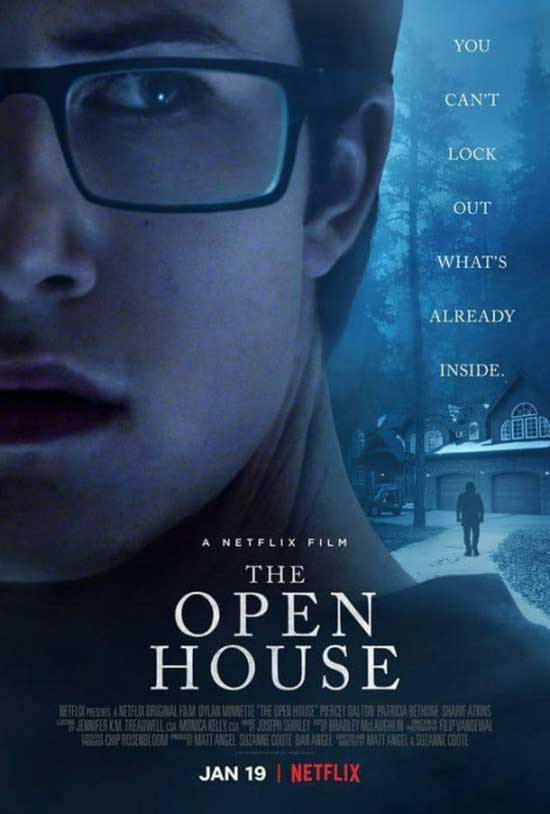 A teenager (Dylan Minnette) and his mother (Piercey Dalton) find themselves besieged by threatening forces when they move into a new house.

An extensive period of time passed—so much time in fact that I lost track—without a psychological thriller-horror film to recommend. Then—“The Open House,” about a mother and son troubled by strange occurrences in and around a new house—premiered on Netflix on January 19, 2018. Reviews for the most part, at least the ones that I’ve noticed, have been lukewarm, though I’m about to refute those responses, and with pleasure.

Written by Matt Angel and Suzanne Coote and directed by the writers themselves, “The Open House” showcases all the elements which I find cinematically seductive and immersive. First, lead actors Dylan Minnette and Piercey Dalton, along with Sharif Atkins and Patricia Bethune, among others, anchor the story by delivering strong, commanding, nuanced performances.

I liked and cared about the characters as soon as I met them—an aspect in which other characters in films of recent years have fallen short. The mother-son tension gives the plot relatable depth and dimension, and their interplay works well and is sustained from beginning to end. The story takes its time developing—competent writing charting the course. Easily distracted or restive movie-watchers might find such a pace, especially the first third of its ninety-four-minute running time, a little daunting. More to the point, if you’re looking for nothing more than sheer sensation or zombies or ghosts or gimmickry, you ought to leave this film off your to-watch list. As for me, I was engrossed by the point of FADE IN.

“The Open House” benefits from original material, and discerning viewers will likely discover, and appreciate, a sprinkling of fresh ideas, none of which I will reveal here. The cinematography and the soundtrack are immaculate all the way through. Memorable shots of long, tenebrous hallways not only keep the viewer curious and on edge but coerce them into envisioning what might happen next.

The camera moving purposefully into dark, shadow-spread corners and up and down staircases and in and out of a maze of rooms and around the vast property will draw in anyone who relishes having the camera assist in putting across the exposition—the photography is executed with a confident smoothness, many layers and textures to reel you in and never let you retreat into a “safe” state of mind. The careful and effective use of atmosphere and setting allow one to “feel” and experience the frigid exterior, the layout of the expansive woods and the scenic yet mysterious landscape, not to mention the equally haunting interiors. Cinematographer Filip Vandewal turned in brilliant work, adding elegance and flair frame by frame. The musical score, a character in itself, enhances the overall mood and tone, adding atmosphere and energy as the story unspools. In my view, to divulge too much here about “The Open House” would prematurely tarnish its luster, and be an injustice to those who might give it a chance. Better to let others see it for themselves and come away with their own judgments and impressions.

Once the film faded to black, I thought: How refreshing—a fine movie that’s fun, thought-provoking, intense, riveting, and different in significant ways from many of the horror-thriller films cluttering the market today—and without the elements I’ve grown weary of: recycled scares; gratuitous and excessive nudity, sex, and gore as filler; cocky, amateur actors posing for the camera. The list could go on.

“The Open House” proves that talented people can take familiar material, rip it to shreds, and successfully reassemble it using their own vision as well as their own creative sensibilities. “The Open House,” from my point of view, has a great deal of substance, achieved with, according to IMDb, an estimated $100,000 budget, and I, for one, applaud and thank the cast and crew for a project well made and for having given me a memorable Saturday night movie—the lights out, the sound turned up, the soundtrack bouncing off the walls, the walls the only barrier between the warmth inside and the cold outside; pleased to once again feel my mind, body, and imagination responding to the experience, realizing I was in good hands, in good company, and savoring the kind of special treat that I thought had been discontinued, perchance never to resurface again. For the first time in a long while, I wouldn’t be opposed to a sequel. By all means, keep this house open!