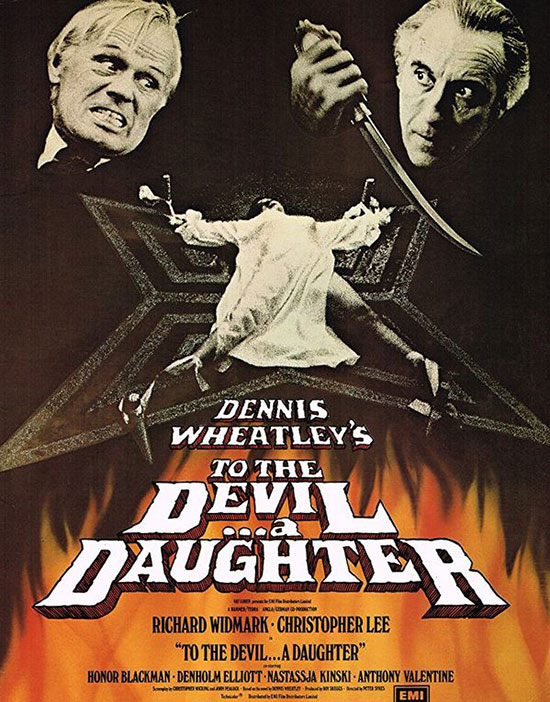 A mysterious man recruits occult book author John Verney to protect his daughter from a cabal of Satanists. Verney is surprised to discover that the woman he’s protecting happens to be a sheltered nun with little experience in the secular world. The Satanists quickly discover the nun’s whereabouts and set out to kidnap her as part of a diabolical ritual.

To the Devil a Daughter is based on the novel by Dennis Wheatley- a British author who was popular from the 1930’s through the 1960’s. Although he’d had some initial success writing historical fiction and spy novels Wheatley really hit his stride with the 1934 occult thriller The Devil Rides Out. The book’s success inspired him to pursue the genre, eventually becoming the dean of British supernatural fiction. Despite his novels being dismissed as “pulp fiction,” Wheatley took his work seriously, conducting vast amounts of research. In the process he met with such luminaries as occultist Alestair Crowley and the fascinating author/researcher Reverend Montague Summers (See my Terrifying Trailblazers article for more on him). Wheatley professed to loath such occult practitioners even while he was making an unholy fortune from their antics. The 1953 bestseller To the Devil a Daughter continued his tradition of well-researched chillers. 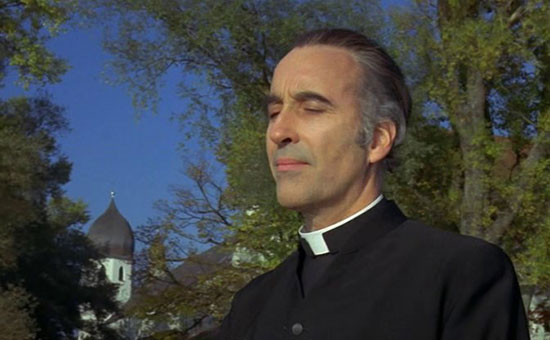 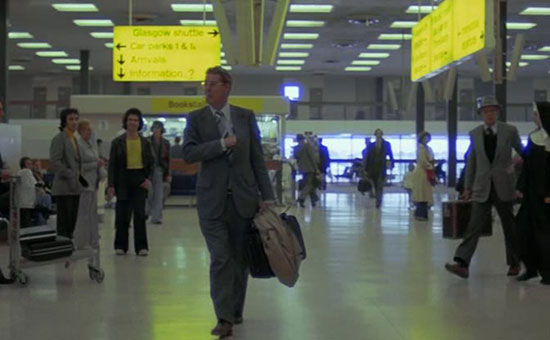 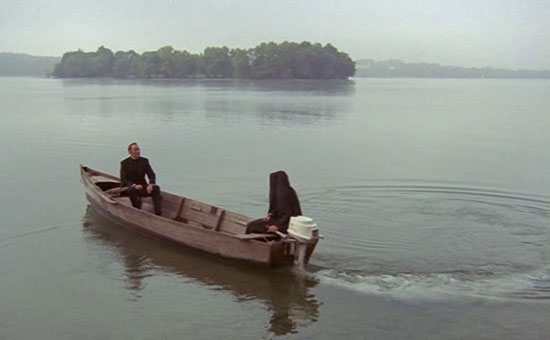 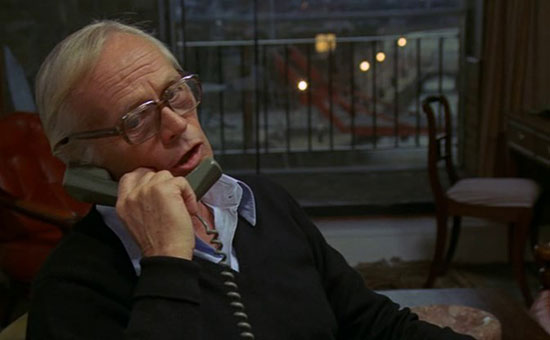 Fast-forward twenty-four years to 1977 when Hammer Films found themselves at a crossroads. Their once popular gothic films were barely breaking even at the box office, choked out by more modern shockers like The Exorcist (1973) and The Omen (1976).  Hammer had already had success with Wheatley’s The Devil Rides Out (1968) so at the peak of the demonic possession craze they returned to that well by adapting To The Devil a Daughter.

And a very loose adaptation it is. The book’s lead character Molly Fountain was a mystery writer who stumbles onto an occult conspiracy. With the assistance of her old pal Colonel Verney she discovered that the evildoers are not only Satanists but also commies to boot! It’s important to note that while Wheatley loathed occultists he really, really hated communists.

In the film adaptation the characters Maggie and Colonel Verney merge, becoming occult author John Verney played by Hollywood veteran Richard Widmark (Kiss of Death, 1948). The whole communist angle is thankfully dropped, along with about eighty five percent of Wheatley’s storyline, in fact it’s right up there with 1979’s Moonraker (one of the best Bond novels) among cinema’s least faithful book adaptations. 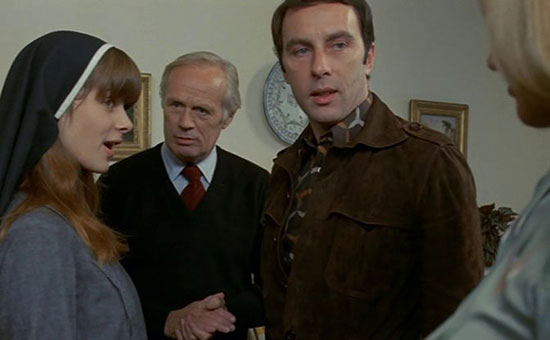 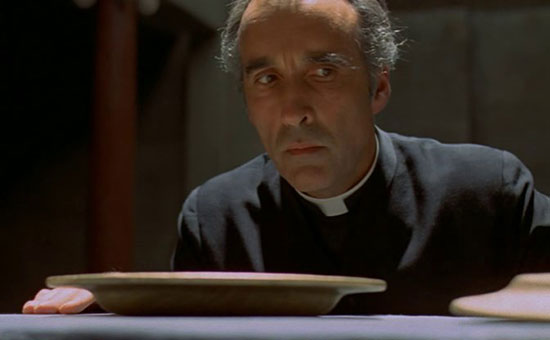 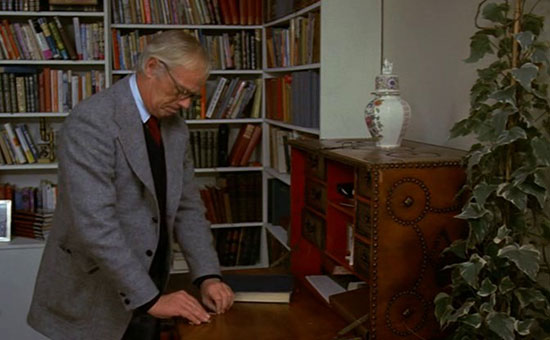 On screen it’s the tale of Father Rayner, played by the great Christopher Lee who has brought forth the child of a demon named Astaroth. But to seal the devilish deal he needs to implant the already living baby into the body of Sister Catherine, an innocent nun played by the alluring Natasha Kinski. But her father (sadly not played by Natasha’s real life dad Klaus) wants to back out of the deal to offer up his daughter to Rayner. So he asks author John Verney to take her in and shelter her from the satanic cult. But Father Rayner and his minions are hot on their tails with an array of supernatural tricks up their sleeve.

It’s a hard film to synopsize because, on paper, it doesn’t make a lick of sense. On screen it only makes slightly more. To the Devil a Daughter was a troubled film from the start, which was why Richard Widmark hated being in it, loudly proclaiming the entire production “Mickey Mouse.” Widmark knew he’d been miscast as a worldly author spouting occult mumbo jumbo. In protest he channeled his hardboiled cop persona from Don Siegel’s Madigan (1968) and surprisingly, his choice kind of works.

Adding to the trouble was a script that was continuously being rewritten during production. But, like Widmark’s performance the continuously evolving script works right up to the finale. The film’s climax feels like it was concocted in a van on the way to the set. 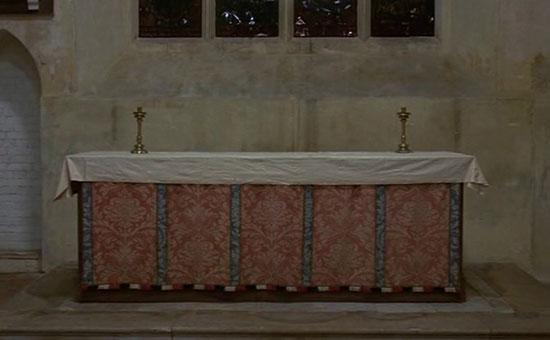 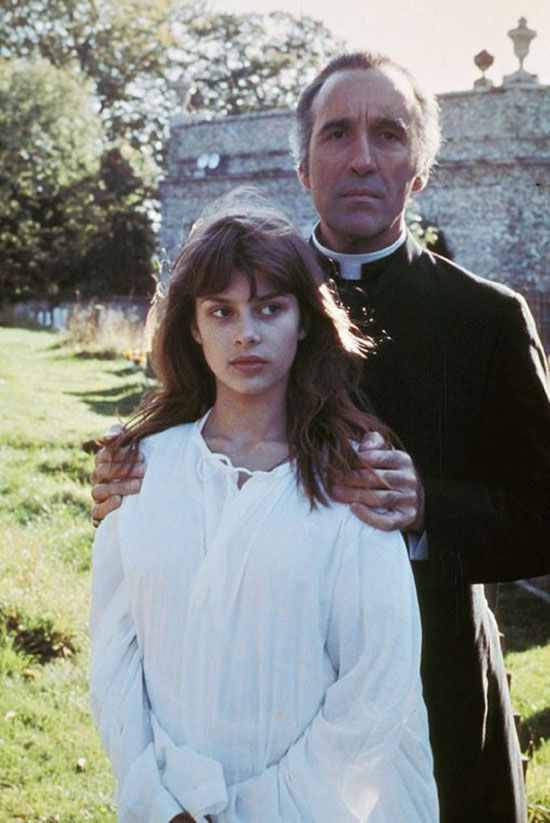 Christopher Lee’s inspired performance is what really drives To the Devil a Daughter. He simply lights up the screen with malice and charisma. Widmark also delivers the goods, though I wish they’d given him a chance to beat the crap out of somebody- clearly he wanted to. Natasha Kinski is interesting as the naïve, to the point of mentally challenged, nun. It’s important to mention that during the finale she has a full frontal nude scene that’s not only gratuitous but was also shot well before her sixteenth birthday. So just avert your eyes from the screen or admit that you’re secretly a bad person. I honestly think the film’s climax was written so off the cuff that they tossed in the nudity to distract you.

Unlike Hammer’s studio bound gothic pictures To the Devil a Daughter is shot in a very natural style by the brilliant David Watkins (Out of Africa 1985, Chariots of Fire 1981) on actual locations. This authenticity immensely helps in selling the film’s crazy quilt plot.

On the downside there’s the titular Devil’s daughter, portrayed by a rubber hand puppet that must have inspired plenty of unwelcome laughter. It’s a real tribute to Christopher Lee that he can act alongside a subpar Gremlins puppet and still give a powerful performance. 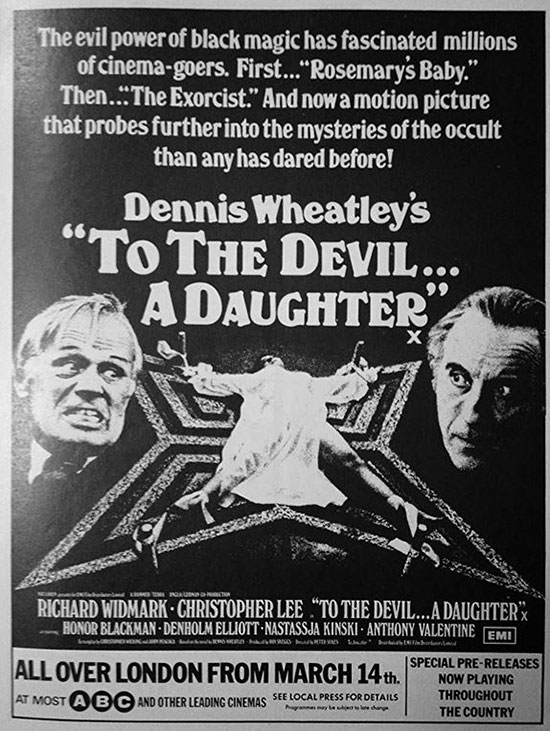 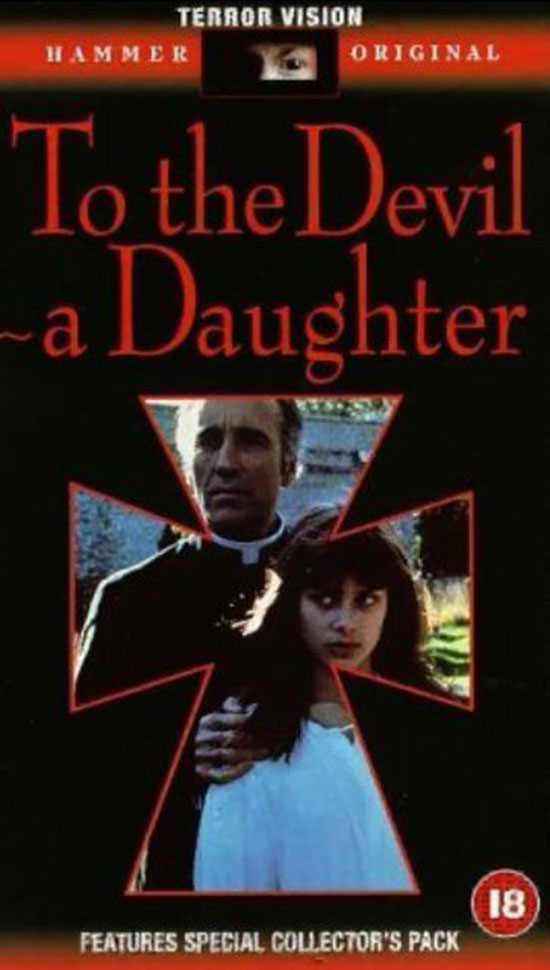 To sum things up I recommend seeing To the Devil a Daughter as a second tier choice in your Satanic-Seventies film curriculum. On the Beelzebub Barometer (an actual instrument of measure!) it’s not nearly as good as The Omen, but still miles above Omen III: The Final Conflict (1981).