BEFOULED is an audio/visual abomination that challenges the viewer to a psychological staring match. There is no dialogue found in the film whatsoever, only the terrifying mechanical soundscapes of anxiety and fear incarnate. This film is a twisted experiment in intestinal fortitude and morals. A psychedelic, gore-soaked feast for the senses, BEFOULED delivers the sickening goods with a 10-ton dropkick to the soul. Are your eyes prepared?

Befouled is a very difficult film to describe, for a number of reasons. Let’s start with what we do know for sure. The film was originally released on VHS by Rotten Cat Media back in February, 2017, in a limited edition of only 20 copies. Gorellectors Films picked up the distribution rights and have put together an October, 2017, DVD release with a bunch of extras included. This is a Canadian “experimental” film, written and directed by Z. Smith. But beyond that, Befouled is very different from your average movie, a bizarre, shocking experience that will not soon be forgotten.

There are no actors in Befouled. There is no script, no dialogue, and no linear story either. Instead, what we’ve got here is an all-out assault on the viewer’s eyes and ears. It opens with a driving beat behind an array of images and streaks of color. Switch over to black and white, and the streaks of color are subbed out for a variety of scavenging animals feeding on carcasses. This soon shifts to orange-hued mirrored images of a slaughterhouse, a PETA-style video of animals being killed. By now, the viewer has realized there is nothing safe here, nothing happy or cheerful, but there is still a feeling, a need to keep watching, knowing that the images on the screen probably won’t get much cheerier. 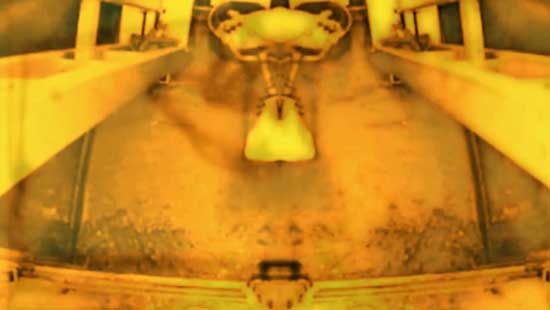 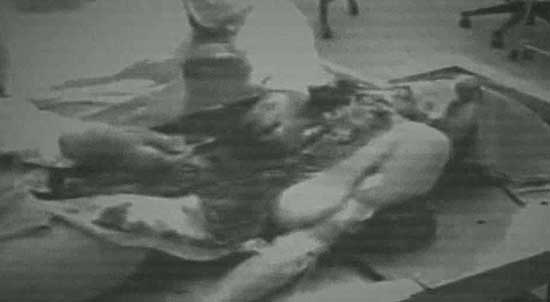 For just over an hour, Befouled subjects the viewer to image after anxiety-inducing image of death and destruction. Marshall Applewhite, leader of the Heaven’s Gate cult, appears, in part, on the screen for a bit. Someone has their hand chopped off. After a close-up on an eyeball and a stroll down a dirty, torn-up, uninviting hallway, we soon move on to autopsy footage. The upper torso of a corpse is opened up, the ribs cut away, and the process of removing the organs gets underway. Eventually, the scalp is peeled back and the brain is removed – not the last time we see inside a skull. We have scenes of the horrors of war; explosions, gunfire, battle scenes, and bombs going off. And easily the most uncomfortable scene comes just after the three-quarter mark: the torture and killing of a large pig for reasons unknown (not that knowing the reason would make the scene any more palatable). 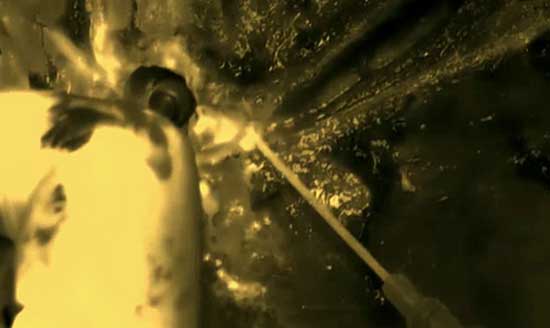 The way Smith pieced these images together is not at all haphazard, but rather quite deliberate. If any message can be taken away from the plot-free, dialogue-free film, it’s that the world can be an ugly, scary, dangerous place. The director/creator places quick shots of normal household things, like a record spinning on a turntable, hand soap, and eggs in a bowl, just before images of a cult leader who convinced his followers to kill themselves, followed by the severing of someone’s hand.

At one point, after a brief countdown from five, we switch back and forth between an eye staring back at us and a shot of static on a television. Another time, a figure appears to be approaching the screen, heading toward the viewer; soon a red tint fills the shot and we find ourselves helplessly watching as a man shoves a stick down the throat of an animal. These may be interpreted to be saying that this is what we see on a regular basis, that there is violence behind almost everything in our culture. 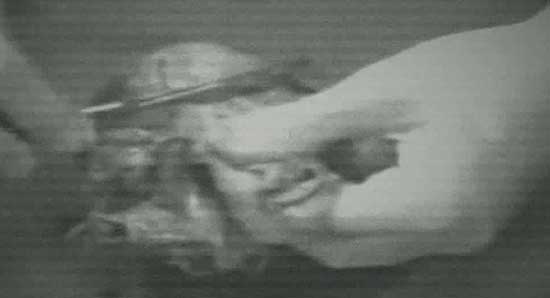 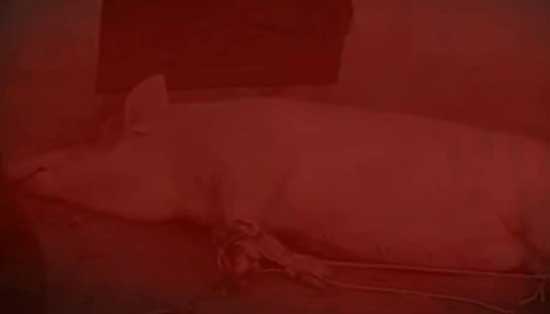 Befouled falls into an interesting film category. This could fit right in being played on a screen behind an intense metal band (anything from Mayhem to Nasum) or an industrial band (mid-nineties Ministry seems the perfect match), or it could just as easily make sense playing on a small TV as an installation at an art exhibit. It’s as much Faces of Death as it is an avant-garde/experimental film ranking alongside the likes of Merhige’s Begotten or the films of Kurt Kren and Otto Muehl. The word “entertaining” is not the first to pop into my head when thinking about this film. “Disturbing fever dream” is a better way to describe how I felt after the final minute ticked by.

Befouled is a movie that will disturb you, it will upset you, and it will make you think. Love it or hate it, the visceral reaction it provokes is one that cannot be denied. This is not a horror movie that can be recommended to the average fan of zombies and slashers and the like. It is a film, an experience, that is going to be appreciated by a small, select audience, an audience that wants to be emotionally affected by a film, even if it’s in a negative way. This is for the fan that wants to find the most extreme film experience, that wants to find surreal, experimental elements in their horror films. I don’t know who Z. Smith is, but I’ll be very interested to see what else they end up creating.