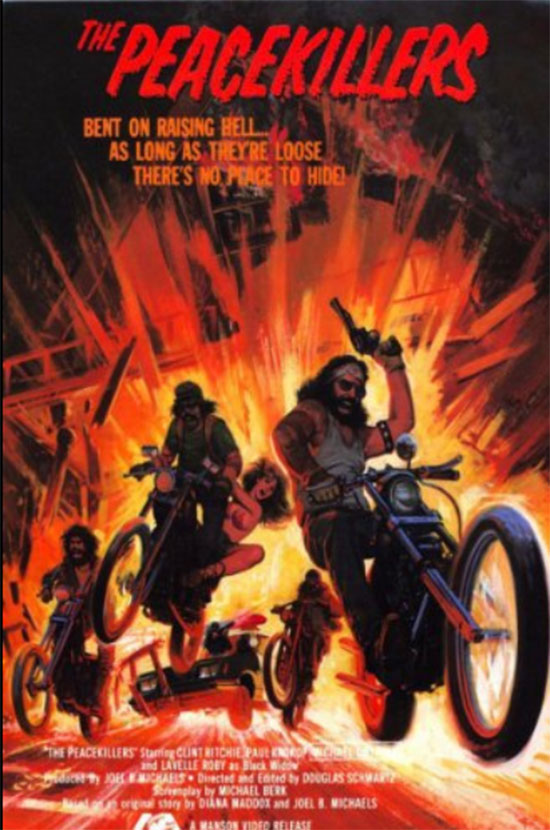 A biker gang discovers that their leader’s runaway old lady has been laying low at a hippie commune. Enraged at her betrayal the gang descends on the hippies, demanding they hand over the woman.

Biker movies are one of cinema history’s more curious sidebars. There must be a hundred of these films, each focusing a group of rebels refusing to conform to society’s rules. As Peter Fonda famously said, “We wanna be free to do what we wanna do. We wanna be free to ride. We wanna be free to ride our machines without getting hassled by the man! And we wanna party!” But despite their rebellious manifestos most biker films religiously rehashed identical plots, casts and even music. When anarchy becomes predictable it transforms into just another tired screenwriter getting hassled by the man.

There’s usually a gang of outlaw bikers who gleefully ravage all the straight arrow citizens in their path. But inevitably one gang member (insert Peter Fonda, Adam Rourke or John Casavetes) experiences an existential crisis leading him to doubt the whole biker lifestyle. Conflicts then erupt with another senior member (insert Bill Smith or… well it’s always Bill Smith). All of this is loosely tied together with protracted montages of the gang riding to the music of Davie Allen and the Arrows. By the way if you haven’t listened to Allen’s classic Blue’s Theme please do so now- I’ll wait. It’s a great piece of music. 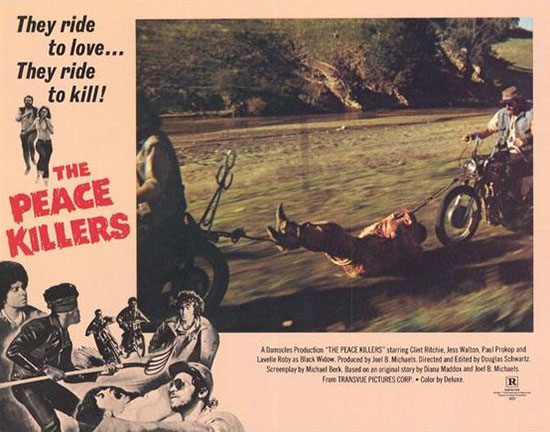 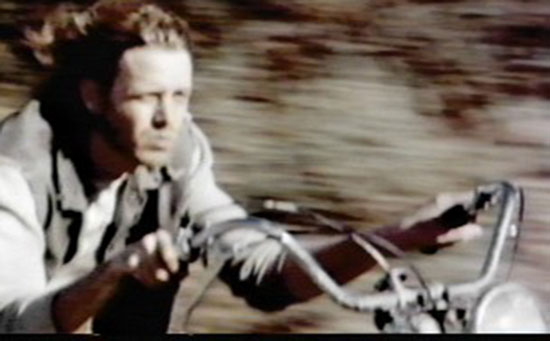 A few, like Roger Corman’s docudrama styled The Wild Angels (1966) or the sadly overlooked Northville Cemetery Massacre (1976) actually had something to say about society, while Tom Laughlin’s Born Losers (1967) is historically significant for introducing his iconic Billy Jack character. At the other end of the shock-meter you have Al Adamson’s Satan’s Sadists (1969) and HG Lewis’ She Devils On Wheels (1968) that are memorable for being bat guano violent and crazy. But sadly, about seventy percent of biker movies just follow the cookie cutter formula until it feels like you’re watching spilled beer dry. Although THE PEACE KILLERS (1971) sincerely wants to join Satan’s Sadists in the unrepentantly brutal hall of fame it has a weird “fear of flying” that keeps it from going hog wild.

It chronicles the exploits of Death Row, a biker gang led by Rebel (Clint Ritchie) that stumbles upon Rebel’s ex old lady Kristy (Jess Walton) who ran off after witnessing a brutal gang rape. Once free she reconnected with her brother Jeffrey (Michael Ontkean) by joining a commune led by Alex (Paul Prokop), a guru who looks suspiciously like Jesus. But their summer of love ends when the bikers roll in demanding their “property” back and threatening to murder any hippies who stand in their way. Eventually a rival African American biker gang led by Black Widow (Lavelle Roby) arrives on scene to challenge Death Row. 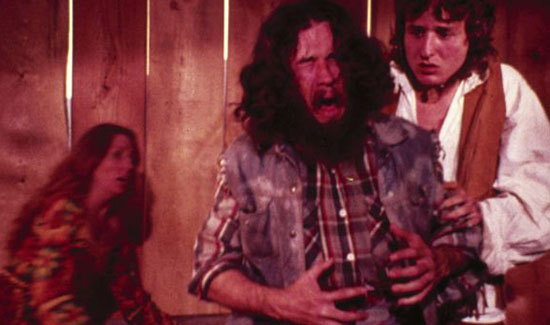 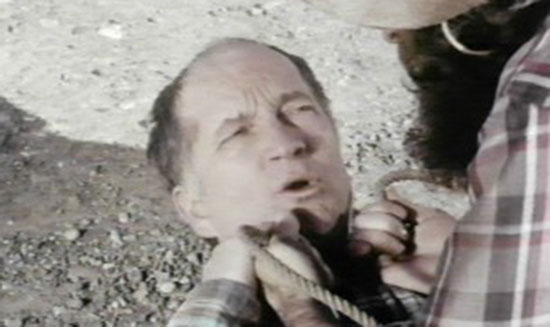 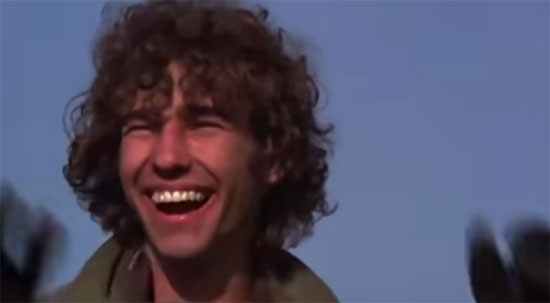 This sounds like a great setup for a no holds barred bikers vs hippies (with a side order of blaxsploitation!) smack down packed with nudity and violence— the gas and oil that fuels the biker genre. For a while it looks like The Peace Killers plans to deliver the goods. We get the genre-mandated police car chase followed by a nasty bit of torture with a road flare. There’s even a brisk a chase between motorcycles and a woman on horseback capped off with a particularly insane stunt involving a person suspended between two moving Harleys.

Kristy’s flashbacks to the past gang rape are also memorable— not for their brutality but rather for having the weirdest piece of product placement I’ve ever seen. As the nude victim struggles and begs for mercy her brutal captors douse her with lovingly photographed cans of Coors beer. Then we see the all of the witnesses to the crime, and they’re all holding up frosty cans of Coors. You expect Sam Elliott’s deep commercial pitchman voice to chime in with, “Coors, the gang rape beer.” It’s bizarre.

It also helps that these are some of the filthiest looking bikers in a genre renowned for its unwashed legions. The guys, the clothes and the bikes all have a patina of crud that’ll have you yearning for a hot shower and an antibiotic.

But after that promisingly filthy and brutal first act The Peace Killers engine sputters and dies. It resorts to padding its running time with scenes of characters walking through the woods looking thoughtful underscored by a Joan Baez wanna be acoustic ballad. There’s endless babbling by the commune leader who proposes talking to the bikers like rational people… even though he’s seen clear evidence that they’re not. But then, just when you’re ready to give up, The Peace Killers offers a montage of hippies sharpening knives and crafting weapons to battle the oncoming biker horde. Maybe… just maybe… these peaceniks are going to go all Chuck Manson on the bad guys! But as soon as the bikers arrive the hippies inexplicably toss their weapons aside, opting to punch and wrestle with the much tougher bikers. It all descends into an unchoreographed roll in the dirt slap fight. It’s so silly that I was inspired to play it at double speed with the Benny Hill theme playing- it worked perfectly!

But despite its disastrous third act the cast still displays some real talent and dedication. Lead actress Jess Walton is fully committed to her character and the scene where she’s attacked and stripped by the gang is genuinely disturbing. She just lets the scene play out in a master shot allowing a group of unwashed mongoloids fondle and kick her with no regard for her own safety. Walton went on to TV stardom in the soap opera The Young and the Restless, appearing in a staggering one thousand four hundred episodes! I bet she never had to roll around in the dirt again. Clint Ritchie also landed on a soap opera, appearing in over four hundred episodes of One Life To Live. Lavelle Roby who plays Black Widow was one of the leads in Russ Meyer’s Finders Keepers Lovers Weepers (1968) and had a smaller role in Beyond the Valley of the Dolls (1970). 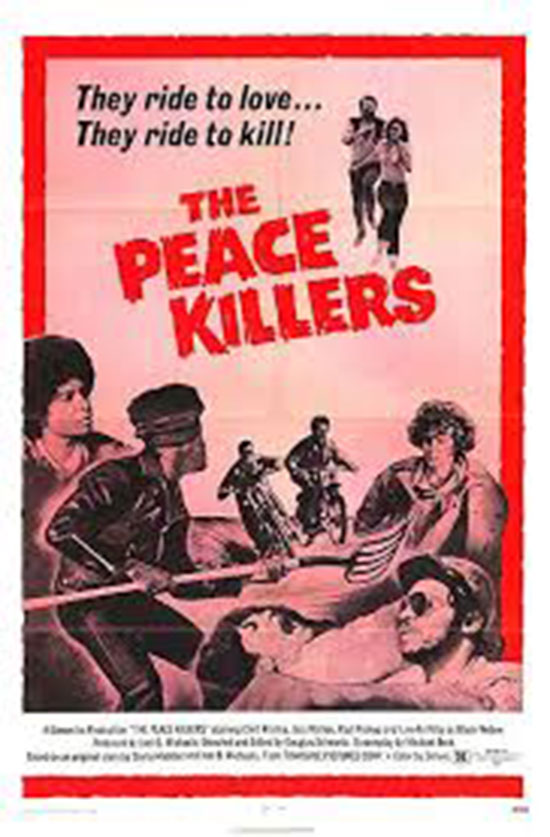 But my favorite character is Gadget, played by Gary Morgan who brings genuine charisma to his scenes that makes his violent character somehow endearing. He went on to a long and fruitful stuntman career, with dozens of credits including Back to the Future 2&3 (1989). I’m betting that the insanely brave (or just insane) person suspended between those two Harleys is actually Gary Morgan. He’s terrific.

There’s also an early screen appearance by Michael Ontkeen, before he made his big splash in the classic comedy Slap Shot (1977) as well as television’s Twin Peaks (1990-1991). He’s fine here in a pretty thankless role.

Director David Schwartz also did pretty well for himself, becoming the executive producer of a little television series called Baywatch, along with its myriad of spinoffs and the recent big screen remake.

Do I recommend The Peace Killers? Personally I think there’s a lot of other unheralded biker movies worth seeing first, particularly The Northville Cemetery Massacre or the British biker/horror hybrid Psychomania (1971). But there are still some effective moments and the recent DVD release looks sharp and clean. Consider The Peace Killers a VOD option as long as the price tag and your expectations aren’t too high and your six-pack of Coors is ice cold.