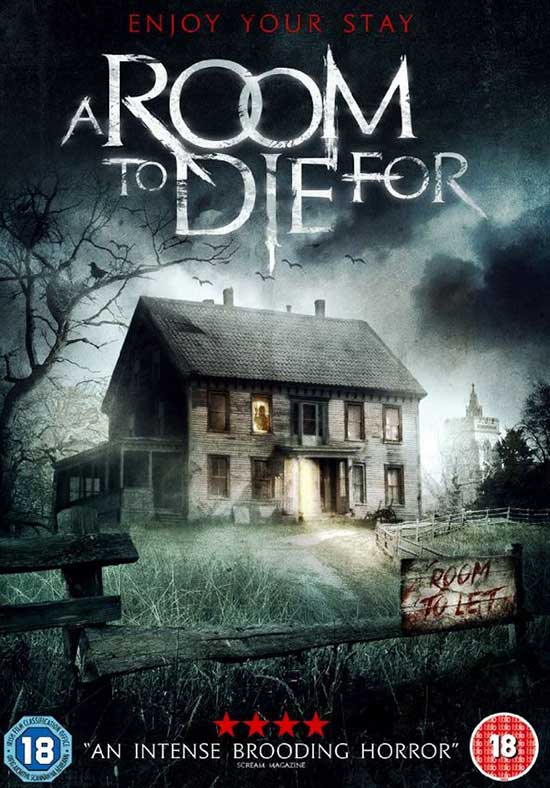 When a broke young couple rent a room in an elderly couple’s London house, it becomes apparent that they aren’t really what they seem.

A Room to Die For is an English horror film of the insane-elderly variety. There’s a long tradition of mad old folks in horror movies, from the hagsploitation classic What’s the Matter with Helen? (1971), to M. Night Shyamalan’s 2015 creeper The Visit, and the makers of A Room to Die For try hard to reach the quality of their forbearers with mixed results.

Part of the reason for this half-success is the film’s division into what are essentially two separate films. The first half follows god-awful stand-up comedian Mark (Michael Lieber, Ramanujan, Video Killer) and his run-ins with his crazy new landlords, Henry (Christopher Craig, Black Venus) and Josephine Baker (Antonia Davies, Lords of London). After his discover of their disturbing secret, the film switches focus to Mark’s more capable girlfriend, Jill (Loren Peta, Return of the Don), and her capture and subsequent torture. There’s a plot involving a baby running through the thing, but you probably won’t guess how it wraps up (unless you’ve got a real sick mind!)

Now, a note: this film gets gross. Rape and infanticide are two critical features of the plot, so squeamish viewers beware. There are, however, some aspects which hamper the vile effects of these atrocities, namely some poor editing and script choices.

The script issues come hand in hand with some questionable directing choices, most of which involve dream sequences and time-jumping scenes. Both of these are story-telling tropes that should be avoided like the plague by anyone but the most expert of filmmakers, and—unfortunately—neither director Devanand Shanmugam or writer Matthew J. Gunn are up to snuff. At multiple points, characters are introduced, never identified, and then fail to return.

What’s more, the scenes containing these characters add nothing to the plot or progression of the movie, and come across like weird inside jokes that viewers aren’t privy to. The editing is at fault, too, as these scenes are shoved between shots in an amateurish way, degrading the fine visual flair of the film, and making these oddball moments even more confusing. The actors in these scenes—notables such as Vas Blackwood (Lock, Stock and Two Smoking Barrels and Creep 2004), Jon Campling (Sleeping Dogs 2013), and Natalie Ann Perry (the upcoming Death Race: Anarchy)—are barely more than walk-ons, and one can only imagine the near-entirety of their characters were either cut from the script or the final edit of the film.

A Room to Die For also features the unfortunate inclusion of scenes where core characters are shown in future scenarios that never actually happen by the end of the movie! Whether these shots were intended to add a sort of trippy madness vibe to the film or what, it doesn’t work, and misleads instead of foreshadows. There’s also a moment of “wait, it was a dream?” which should always be taken out of a script, preferably with a match.

Luckily for the crew, the acting on hand ranges from good to stellar, with roly-poly Christopher Craig playing a nut with disturbing appetites unnervingly well. Lieber does fine as an awful comic with no motivation and a childishness-complex, while Loren Peta, the actual star of the film, delivers her lines believably, even when they’re just whimpers. She imbues her middle-class 20-something character with a realness that makes you cringe for Jill, despite the poor sound mastering.

And boy, is it poor. You’ll need to listen to this film with headphones, subtitles, or just accept that you’ll miss bits here and there, because the audio dips with terrible frequency. Hopefully the film will be remastered in this regard, as there’s noticeable static surrounding dialogue, and some scenes are downright impossible to decipher.

Despite all of these problems, A Room To Die For does manage to make one queasy by the end, and might be the right fit for someone in the mood to be made uncomfortable. Just know that you’ll be straining to hear some fairly unimportant dialogue, and be ready to ignore any scenes that don’t make immediate sense—focus on them, and you’ll just get angry. (And no one likes you when you’re angry.)