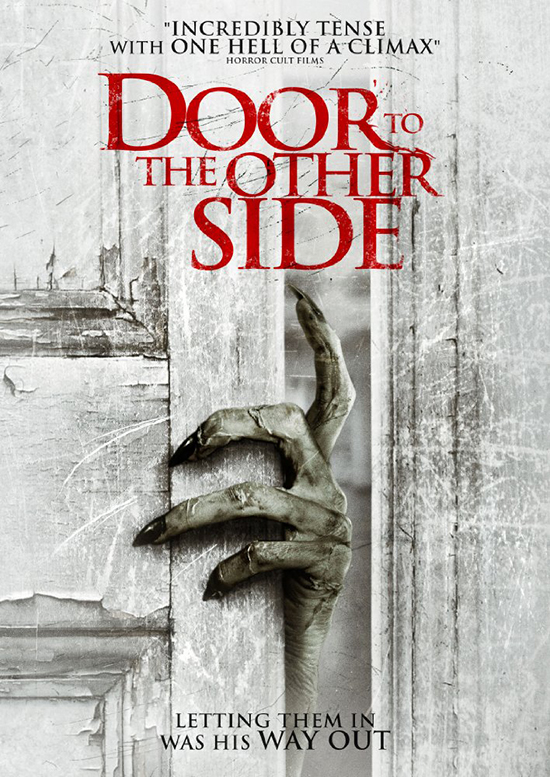 A young couple awakens a terrible force when they attempt to socialize their reclusive neighbor.

Not many people would truly say they wouldn’t help someone in a bind should the occasion arise. Reaching out to our neighbors in their times of need is what alleviates us above animals. It makes your neighbor feel good, it makes you feel good. Everyone feels good. Door to the Other Side – also known as Reclusion in other regions – is the antidote to that warm feeling in your tummy you get whenever you lend someone a cup of sugar, highlighting why one should never truly offer support of any kind.

Tim (Mitch Holden) is a recluse in the middle of sunny suburbia. Whilst the kids frolic in the sunshine, Tim hides in his hovel of a home; getting ready for work but never leaving the house. Suffering from sleep apnea, he’s haunted by visions, which have completely broken his spirit. And to cap it all off, he’s about to be evicted from his house. He’d become one of the many forgotten of life if it wasn’t for his neighbors Nick and Joan, played respectively by Nicholas Bianchi (Beneath Loch Ness) and Chelsea Gilligan (Star-Crossed). Nick regularly goes over to offer Tim any form of support he needs and, in return, Tim thanks him with long bouts of uncomfortable silence. When My Little Pony said friendship is magic, this wouldn’t have been on their original blueprint. Still, Nick persists and Tim soon starts coming out of his shell, which is bad news for the young couple.

Directed by Norman Lesperance (Looking for Lions) and written by Bianchi, Door to the Other Side starts off rather promisingly with a seemingly unrelated scene of a young girl being horrifically terrorized by a malevolent spirit. And whilst it certainly gets your attention, it becomes apparent rather quickly that the film isn’t going to be able to keep up this pace its set for itself. In fact, it doesn’t even try.

Door to the Other Side becomes such a slow burner after its cold opening that it’s hard to tell if anything is moving at all. Overall, this is not a bad thing. There are some great films that refuse to be rushed by a modern day audience’s appetites. Equally, it looks pretty slick for a low budget movie, but let me be clear, this is obviously a low budget movie. One which can’t paper over its cracks.

Whilst watching Door to the Other Side, I was often reminded of Observance, the Australian shocker, in which director Joseph Sims-Dennett expertly racks up the tension whilst taking his own sweet time. And then I realized, I’d rather be watching Observance.

To be fair, come the third act, Lesperance does manage to uncork a few attempts at scares, but he also overeggs the pudding with information dumps that attempt to explain everything that’s gone on before. Remember the great opening scene I mentioned? That does come back into play at some point, but its reveal is completely dependent on how much you’ll still care by then. For me, my enthusiasm had long since departed and taken the ferry to somewhere over the horizon.

In terms of performances, this is a mixed bag with perhaps Holden holding his place at the top of the pile. As the haunted Tim, Holden elicits some kind of sympathy for our protagonist, particularly come the film’s several reveals later on. Sadly, he’s not enough to mitigate the rest of the film with its J-horror clichés and twists that add nothing.

Whilst the use of sleep apnea is pretty interesting, again, there are better films that cover the phenomenon. Take for example, Rodney Ascher’s documentary The Nightmare, which is much scarier than what’s being dished out on screen here.

A mixture of missed opportunities and reflections of other films covering similar ground, Door to the Other Side is best left closed.