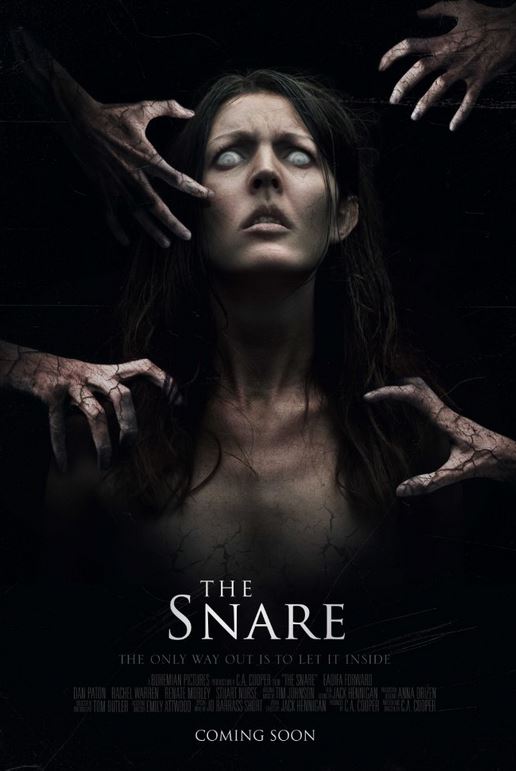 Three friends head to the seafront for a drunken weekend, only to be imprisoned on the top floor of their holiday apartment by a malevolent paranormal force.

I’m a big fan of the Evil Dead franchise, including the remake that was released just a few years ago. Whenever someone tries to compare a movie to that franchise, that creates a certain amount of expectations. I’m expecting to see a mixture of horror and humor bathed in over the top gore, or an intense and bloody experience. I’m on board for either experience. I love a good, fun gore flick, after all. Of course, it’s entirely possible that I’m a very sick man. After all, I’m the guy that laughed when I saw one of the characters in Final Destination gets hit by a bus.

The Snare is one of those movies I heard be compared to the Evil Dead films, so I was naturally curious to see if that held true. It didn’t live up to that description, and honestly, it was kind of unfair to compare it to Sam Raimi’s works. It does its own thing, and should be evaluated on its own merits. It never came across as trying to be like Evil Dead, and whoever thought it was a good idea to hint as much should be punched. It set preconceived notions of what to expect that can hurt the overall experience.

The Snare is about three friends who decide to hole up in a seafront apartment for the weekend for a good time. Things take an unfortunate turn when they end up trapped in the apartment. As they run out of food and water, they begin to break down mentally and physically. It seems like a supernatural force is holding them hostage, and it’s mostly focused on Alice (Eaoifa Forward). The actual presence of the supernatural is called into question because Alice herself may not be the most mentally sound person.

While the film wasn’t as gore soaked as I expected, it was still an effectively tense movie. Having the movie stay mainly within the confines of the apartment, the director is able to create a feeling of isolation and claustrophobia for the characters and the viewers both. As things keep getting worse for our leads, we almost feel as if we’re stuck in the situation with them. The tension is unrelenting.

Alice herself is having strange dreams and sleep walking episodes that hints that there is a mysterious force at work her, but her behavior only makes her the subject of suspicion. That puts our lead character in the most precarious position.  Early on, we get indications that Alice has a feel issues of her own. From watching her father creep on her in the beginning to the movie, and her own dreams/delusions, we are left wondering if there truly is some evil presence behind the characters’ predicament or if Alice’s psyche has taken the last exit to Psycho Town. By raising these questions, the film gives sense of confusion and uncertainty to an already dire situation. Eaoifa Forward does a pretty good job of showing Alice’s own confusion, fear, and vulnerability. She also adds layers to her performance that does a good job of insinuating that maybe Alice isn’t all there. 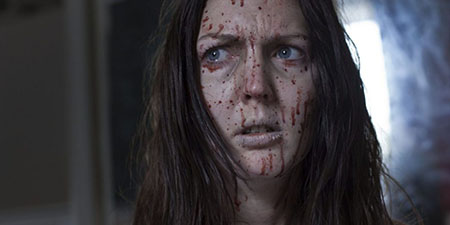 Dan Paton also shares a lot of screen time. He comes across as having a bit of roguish charm early on while showing signs of explosive anger. Once everyone is trapped is in the apartment, that anger becomes more prevalent. He becomes more paranoid and aggressive the worse things get. He slowly becomes a menacing figure. There’s an undercurrent of danger to the character, and Paton was pretty good at showing that without overdoing it.

Sadly, Rachel Warren as Lizzy didn’t get to do much in the movie. Of the three main characters, hers was the one that ended up with the least amount of screen time. Her character seemed to just lay around and not do much of anything once things got serious. With that said, Warren was pretty decent in the scenes she had. She was very likeable in the beginning of the movie, so seeing her character just give up added an air of tragedy.

On the downside of things, there’s a few things that didn’t make sense. I can understand why a couple like Carl and Lizzy would want to go hang out and party for the weekend in a secluded spot. Why they would bring along Alice was a little curious to me, and she seemed more like a third wheel. Lizzy and Alice were supposed to be childhood friends, but still, it seemed weird to let her tag along. If there was another guy in the group, it could have helped better establish Alice’s participation. Maybe Carl wanted to get up to some kinky hi-jinks with both ladies?

Another thing that stretched creditbility is that near the end of the movie (spoilery-territory here), Carl snaps and decides to force himself on Lizzy. This is a person suffering from starvation and dehydration. He had already made things even worse for himself by giving himself food poisoning, so I doubt he would have the energy to suddenly decide “I’m gonna have me some rape for lunch!”

With that said, The Snare was a very taut movie. Solid performances, a claustrophobic atmosphere, and unsettling imagery helps come together to create a very effective and disturbing experience. I definitely recommend giving it a watch. Just don’t go looking for the next Evil Dead.