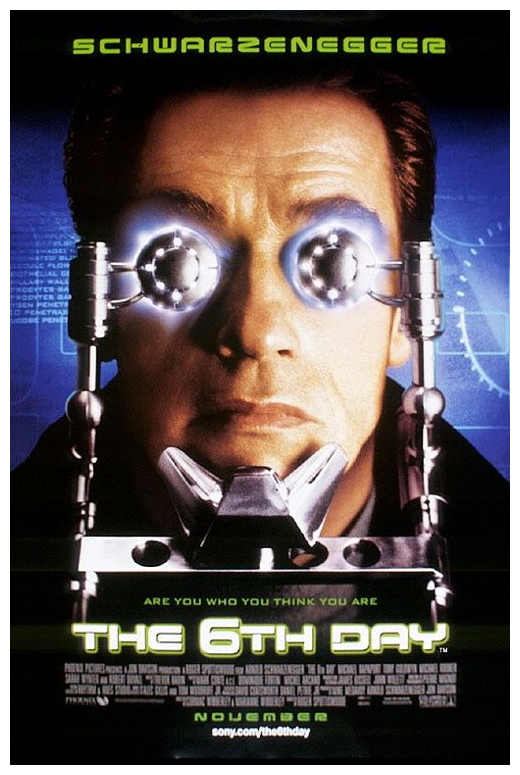 “Set in the near future, where cloning is carried out on everything except humans. Adam Gibson is a family man whose life is shattered when he finds himself cloned illegally by Replacement Technologies, a cloning conglomerate. Adam sets out to find who and why he was cloned, as he tries to get his life back. But the firm’s sinister men are after Adam to murder him before he lets out their secret. The real join hands with his impostor to fight back against the laser gun wielding thugs and financially powerful Replacement Technologies to get his family and identity back.” (courtesy IMDB)

Human cloning is the creation of a genetically identical copy of a human and the term generally refers to artificial human cloning involving the reproduction of human cells and tissue. The possibility of human cloning has raised many controversies and ethical concerns which have prompted several nations to pass laws regarding cloning and its legality. In 1993 a Time magazine article portrayed cloning in an extremely negative light, as did a 1997 Newsweek article. Cloning is a recurring theme in a wide variety of contemporary science fiction, from action films such as Parts: The Clonus Horror (1979), Jurassic Park (1993), Replicant (2001), Resident Evil (2002), The Island (2005) and the Star Wars (1977) franchise, to comedies such as Woody Allen‘s Sleeper (1973) and Michael Keaton‘s Multiplicity (1996). In his novel The Ophiuchi Hotline (published 1977) author John Varley created a future in which human cloning is commonplace as is the ability to record memories and download them to another brain at a later date. 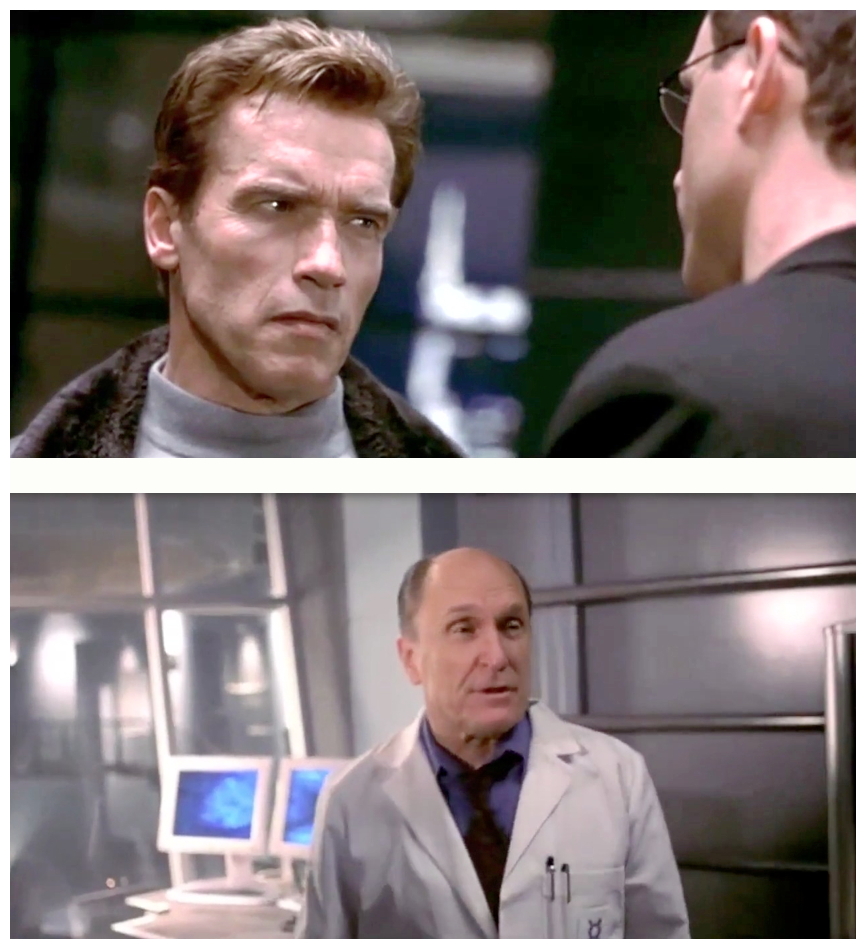 As a result, murder goes down in importance and dismissed as a second-rate crime, since the victim can be easily revived with their memories restored. Even if the technological breakthroughs could be achieved to make such a process practical and cost-effective, there still remains questions regarding the ethics and legitimacy of the approach. Are biological heritage and memory enough to re-create a person fully? Is there an intangible aspect that would defy such replication? Would a re-created person who seemed identical to his predecessor in every way to the world around him (and even to himself) in fact be the same – or would this new life-form be merely a copy, at some measure removed from the original? What if one or more duplicates were made of someone who was not yet dead? Would the original have squatter’s rights? The 6th Day (2000), a Phoenix Pictures production released by Columbia Pictures, attempts to explore many of these issues. 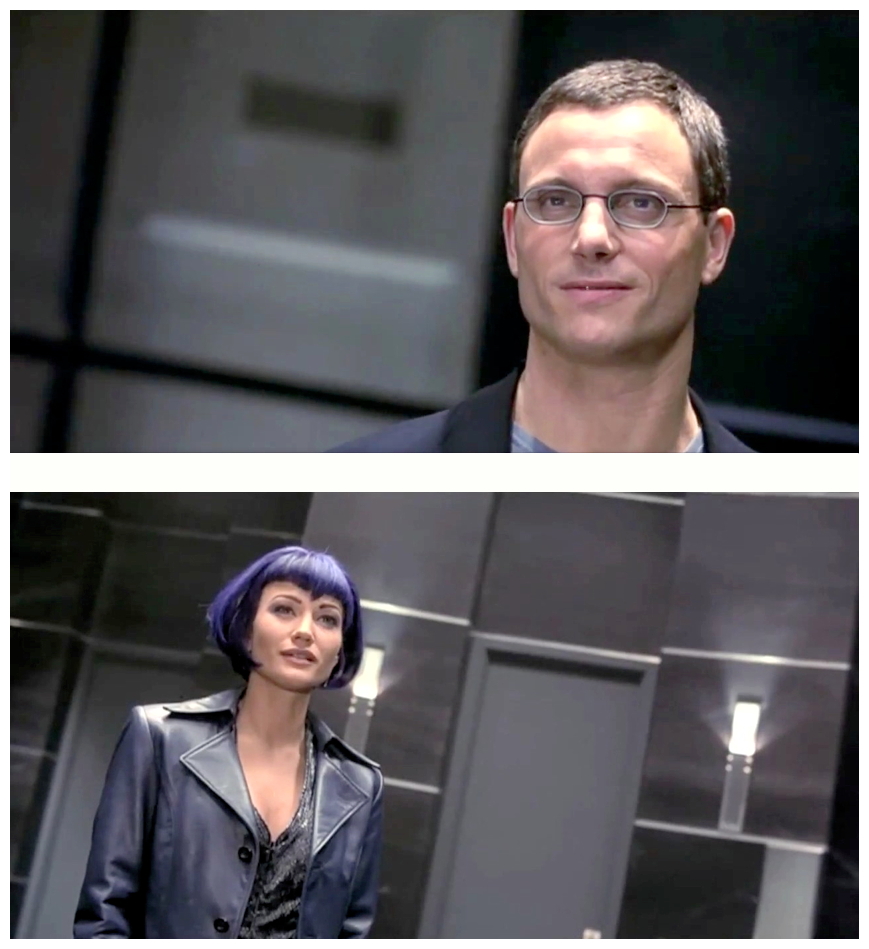 In the movie’s far-flung future year of 2015, cloning of dead pets is a fairly routine event, as is the duplication of fish and livestock to create supplemental food sources. But human cloning is strictly forbidden under the ‘Sixth Day’ law, a reference to the book of Genesis and the creation of mankind on the sixth day. Originally Joe Dante was set to direct starring Kevin Costner but, after Costner dropped out, Phoenix chairman Mike Medavoy found himself back at square one. When Arnold Schwarzenegger took interest, Medavoy hired Roger Spottiswoode, who was already slated to direct The World Is Not Enough (1999) but chose to make The 6th Day instead, because he was intrigued by the script. Vancouver was selected as home base for the production, though the filmmakers also utilised practical locales in the city and made an excursion to Toronto for a shopping mall scene. 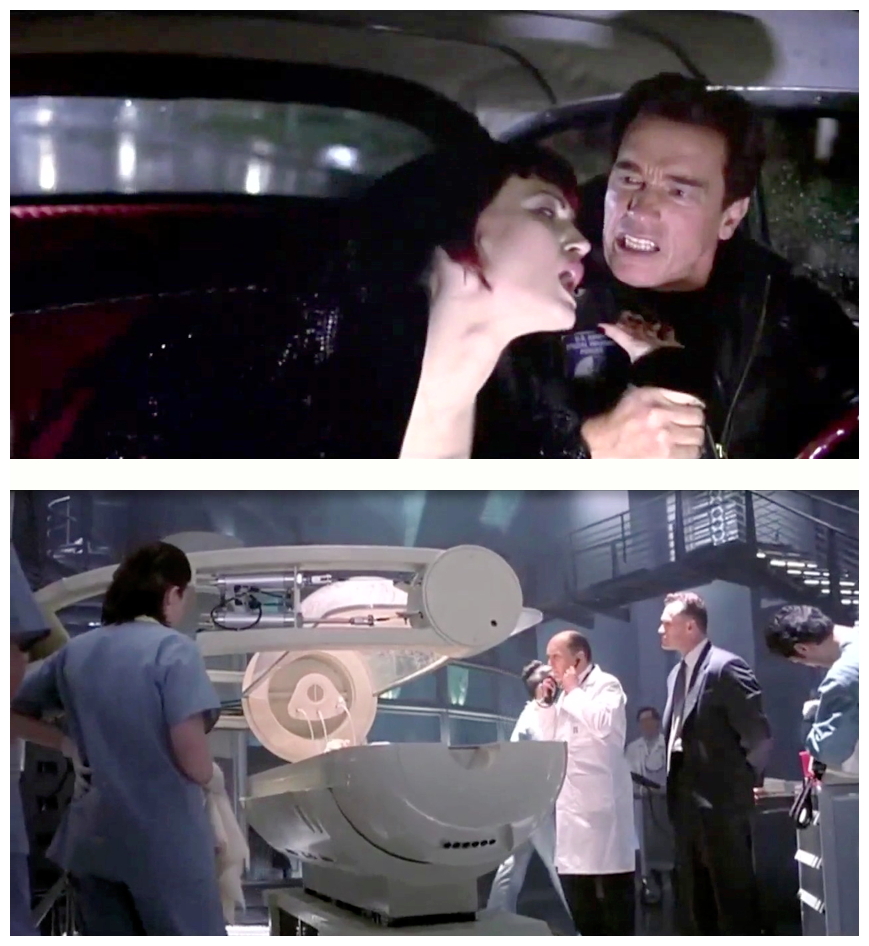 Written by husband-and-wife team Cormac Wibberley and Marianne Wibberley, the movie introduces pilot Adam Gibson (Arnold Schwarzenegger) at his home, where he is picked up by his business partner Hank Morgan (Michael Rapaport) and driven to their air charter service. Once there Gibson demonstrates their charter fleet of two Whispercraft, futuristic vehicles that are part-helicopter part-jet, which have rotor blades that retract into wing-like forms for super-fast flights. Gibson receives a call from his wife Natalie (Wendy Crewson) informing him that the family dog has died, asking that he have it cloned before their daughter finds out. Though resistant to the notion, Gibson is persuaded by Morgan, who has a cloned cat, to look into it. In Gibson’s stead, Morgan flies their next client, Replacement Technologies CEO Michael Drucker (Tony Goldwyn), to a remote mountaintop destination but, upon landing, both men fall prey to an eco-terrorist assassin (Colin Cunningham) opposed to the company’s illegal practices. 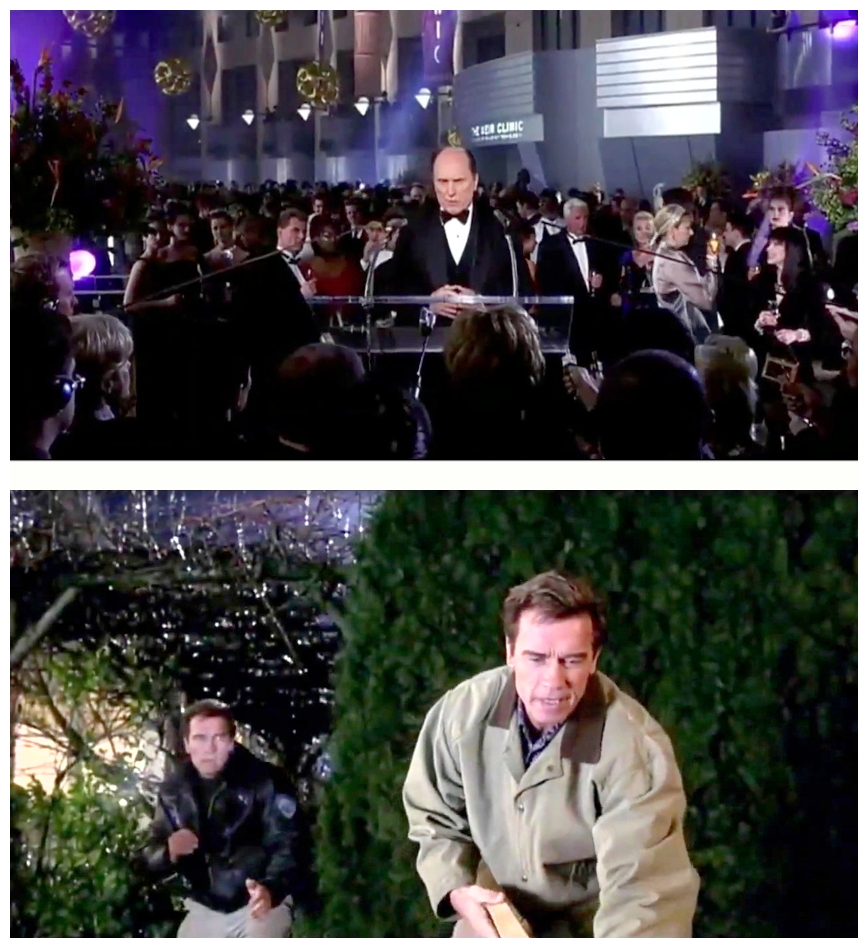 Gibson is next seen in a shopping mall, somewhat disoriented and seemingly unaware of how he got there. As he makes his way through the sprawling shopping centre, trams zip past above him and holographic advertisements play out mid-air. Unsure that a cloned pet will convince his daughter, he checks out a a RePet store, but decides instead to buy a SimPal animatronic doll named Cindy (the SimPal slogan is a deliberate homage to Douglas Adams and The Hitchhiker’s Guide To The Galaxy: “Your plastic pal who’s fun to be with!”). Returning home with the doll, Gibson peers through a window to discover a duplicate of himself celebrating his birthday with family and friends. Before he can enter the house and confront his duplicate, Gibson is attacked by Drucker’s thugs but, hey, this is the Austrian Oak we’re talking about here – he fights them off and flees in his car, but his pursuers follow in a van, firing at him with laser-like weapons called ‘foosh’ guns (designed by artist Ron Cobb). 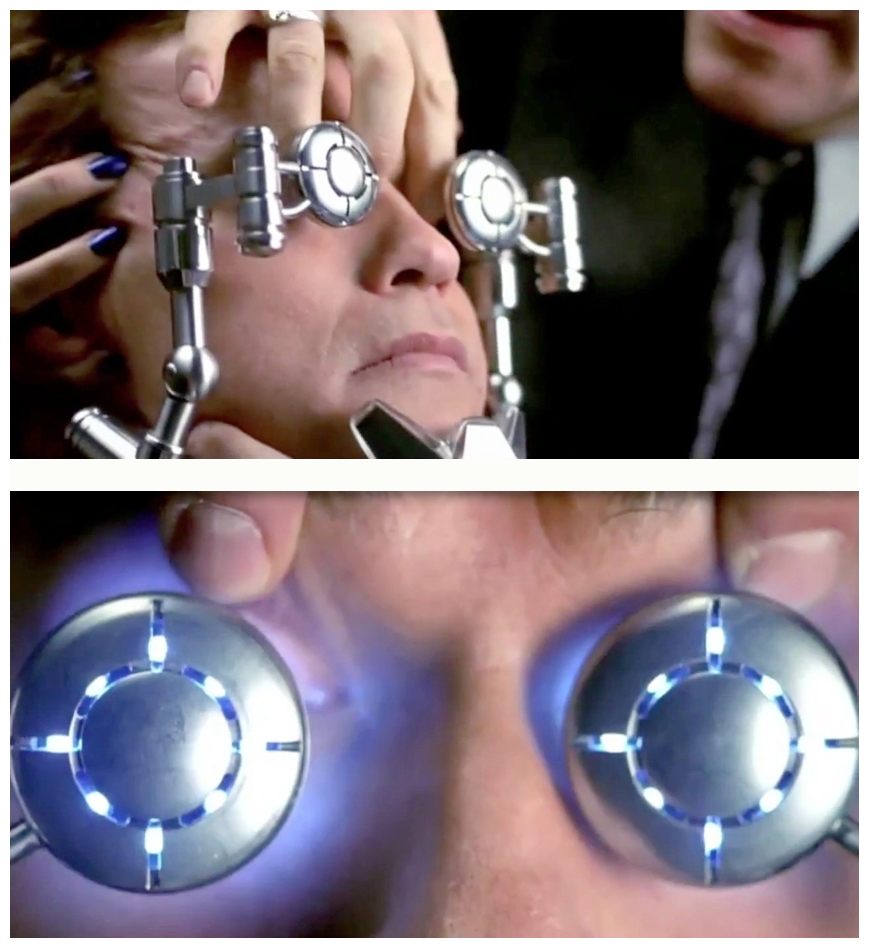 Having dispatched his attackers, Gibson goes to the police to file a report. He speaks with a holographic virtual attorney (Jennifer Sterling) who morphs into a virtual psychiatrist (Walter Von Huene) after hearing the pilot’s crazy tale, but gets little satisfaction from either. A re-cloned thug named Wiley (Rod Rowland) comes after Gibson outside the police station, but the pilot kills him – again – by breaking his neck. To make his way past police officers, Gibson lifts Wiley onto his shoulder and carries him, passing him off as drunk. Later Gibson visits Morgan’s apartment, encountering his business partner’s girlfriend, a holographic virtual construct (Jennifer Gareis). Morgan eventually falls prey to the eco-terrorist who, before dying, tells Gibson that his business partner was actually a clone, since he killed the original one on the mountaintop earlier that day. 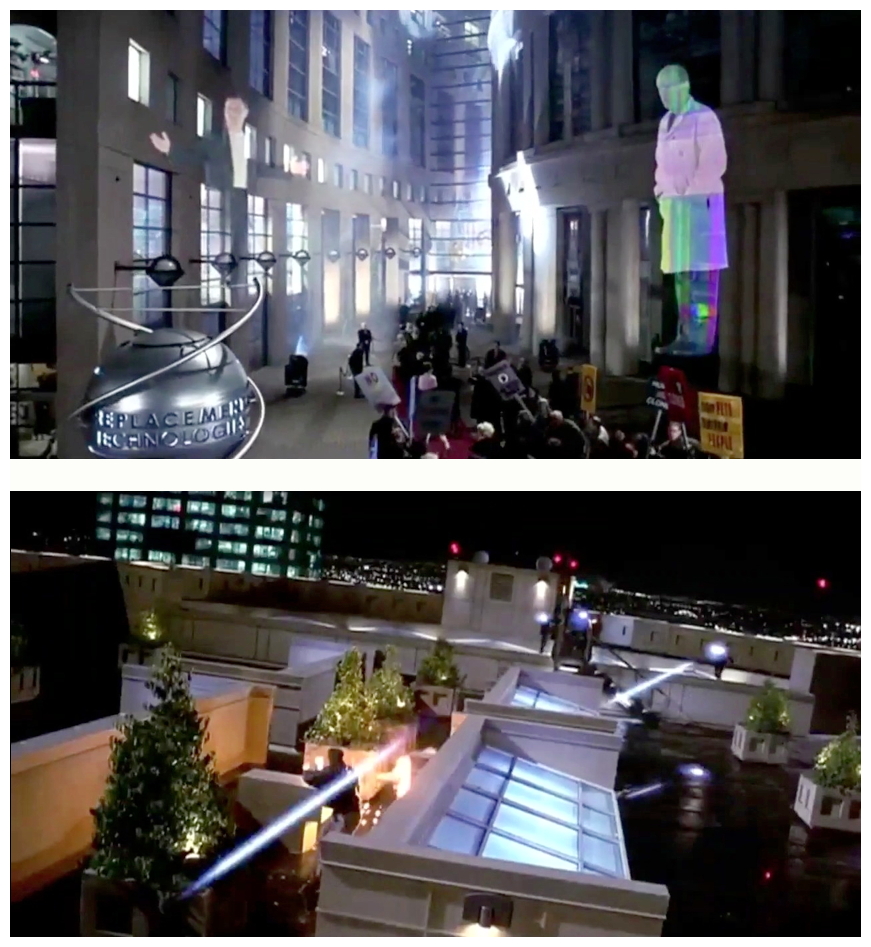 Later in a parking garage, Gibson engages in a gunfight with Drucker’s cloned thugs, shooting the fingers off Talia (Sarah Wynter) and he steals her thumb. Using the thumbprint from the severed digit, Gibson gains entrance to the Replacement Technologies laboratories where he meets Doctor Griffin Weir (Robert Duvall), the scientist behind Drucker’s illegal human-cloning technology. Weir confirms the assassin’s story: Drucker was resurrected but the incident had to be covered up so Gibson was cloned because they thought he was the dead pilot. Weir explains that Drucker – who already died years before – could lose all of his assets if the revelation became public, since clones are devoid of all rights. Sympathetic with Gibson’s plight, Weir gives him a memory disc containing all the cloning data, and Drucker retaliates by kidnapping Gibson’s wife and daughter (Taylor Anne Reid). At this juncture, Gibson meets up with his other self and they agree to work together to rescue their family. 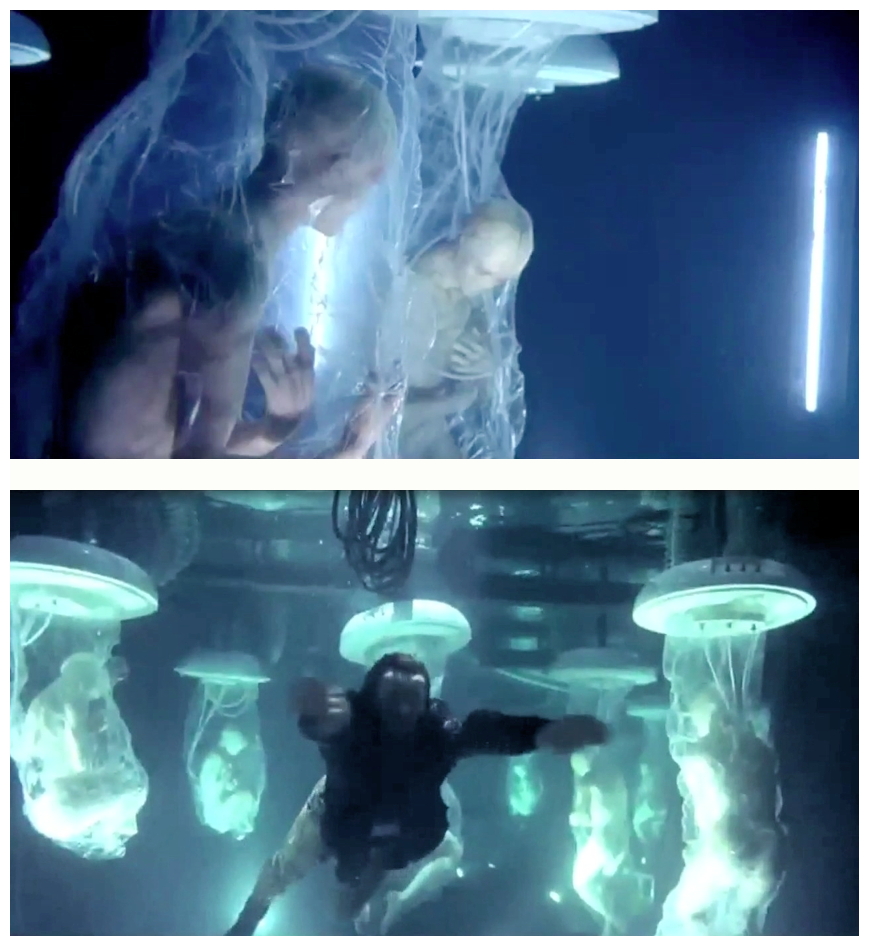 The premise of The 6th Day is hard science fiction, using projections of the future to examine some aspect of our society. With this premise, the film is open to make social observations and sometimes does it well, addressing the legalities and ethical questions concerning cloning. Even though the technology exists in this future, it is not widely accepted. Some of these observations are stated with all the eloquence you could expect from an action film but others are done subtly, even with humour. Unfortunately the science fiction elements are constantly interrupted by mediocre action scenes. Between intriguing dialogues we are assaulted by clumsy cookie-cutter action sequences one might expect from a made-for-TV movie. The action suffers from a lack of creativity which, ironically, is where the rest of the script excels. 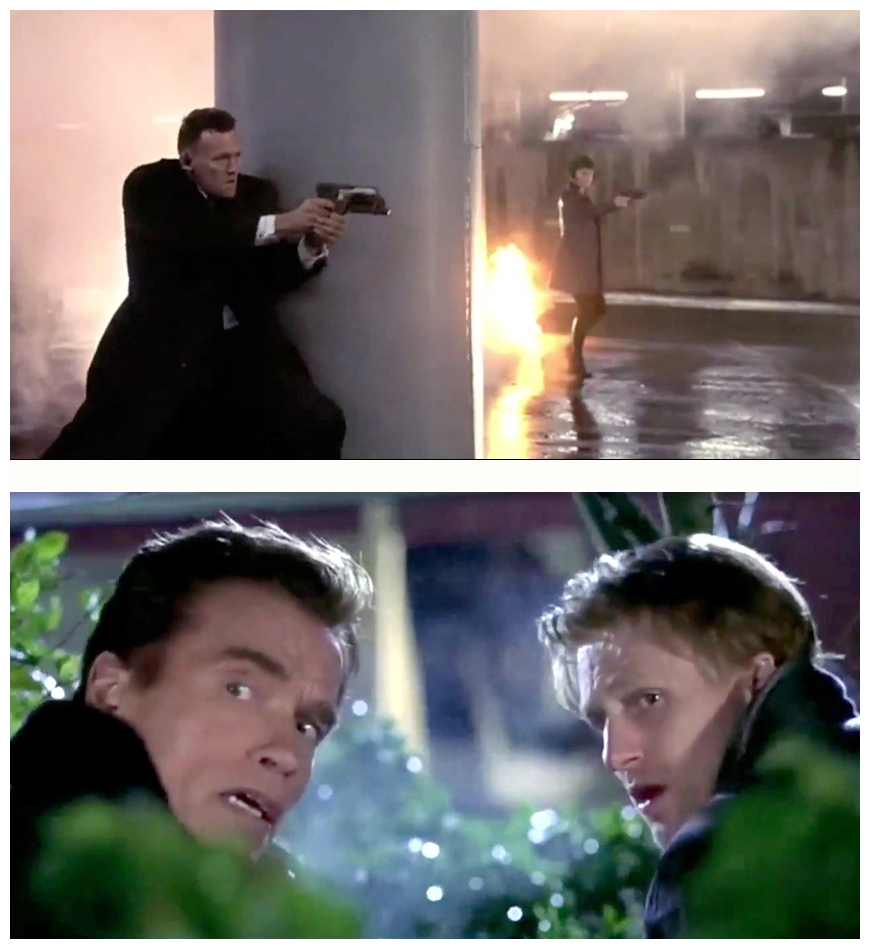 What could have been an interesting and exciting look at the evils of cloning turns out to be just a B-grade action film, despite an above-average script and one of Schwarzenegger’s best performances. He is both charming and believable with a surprising level of humanity, particularly during everyday scenes – but don’t worry, thirty minutes in he picks up a gun and before you know it he’s back to killing bad guys and delivering one-liners. The primary problem with The 6th Day is its failed potential – with some better action sequences this could have been quite a decent film. Please join me next week when I have the opportunity to throw you another bone of contention and harrow you to the marrow with another blood-curdling excursion through the magical world of human cloning for…Horror News! Toodles! 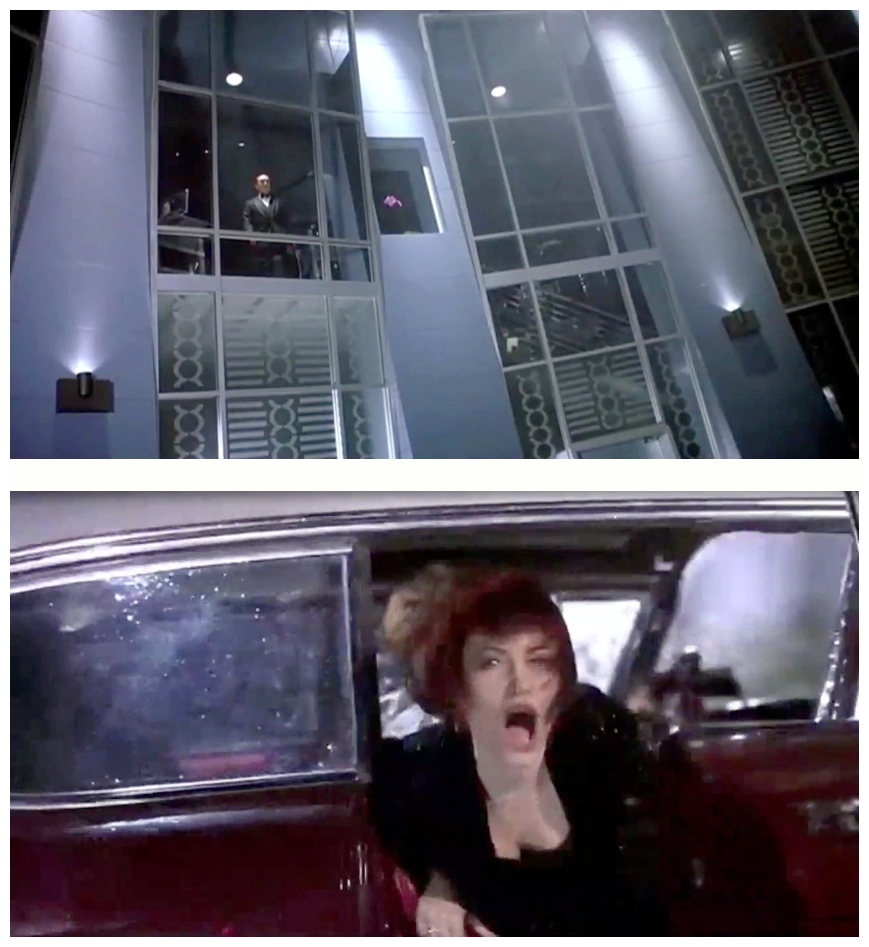