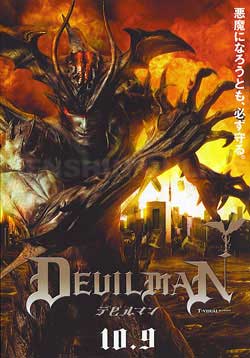 A scientific exploration in search of a new energy source unleashes a group of powerful demons who begin possessing human bodies and destroying civilization. Close friends Akira (Hisato Izaki) and Ryo (Yusuke Izaki) wind up on different sides of this epic struggle. Akira’s inner strength allows him to maintain his identity and fight for good, but the weaker Ryo is completely overtaken by Satan himself.

Low and behold the Devilman, taken from the popular manga series by the same name per artist Go Nagai. In fact in research the Devilman has spawned an entire franchise of books, cartoons, merchandise and books. In 2004, Hiroyuki Nasu directed a live action version that was theatrically released in Japan. Reports indicate though that this films was disliked by fans of the series and received much criticism. The effects of Devilman were highly CGI based which even upon viewing now 6 years later were still pretty fantastical on many levels. My review comes unbiased not spending any time up to this point on any aspect of the series. 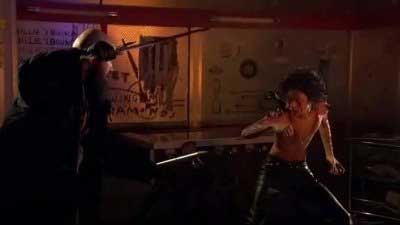 The movie is centered on 2 best friends Akira Fudo (Hisato Izaki) and the blond haired Ryo (Yûsuke Izaki). Akira has spent many years being bullied only to be protected by Ryo who comes across introverted and dark without much reason. Akira’s parents died at an early age in which he was taken in by the Makimura family. As we find them all now in their teens, they face life with the same complications as any teenager. Akira begins to fall in love with his step sister Miki Makimura.

Complications ensue when Ryo’s father a scientist accidentally opens the portals to hell per a drilling expedition in Antarctica. This results in demons being released from the earth’s core in which they must merge with humans to survive. 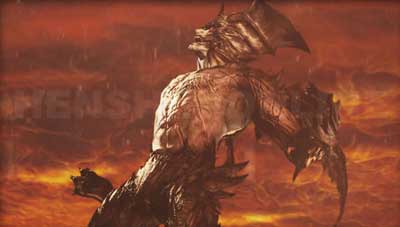 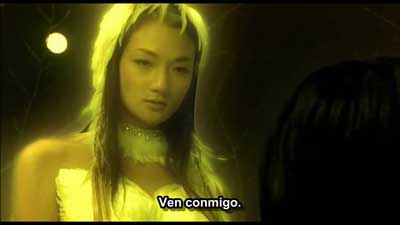 This incident actually inflicts an outbreak in Japan with demons merging with humans and creating a very similar-in-nature instance of X-men-like relationships between the humans and the newly merged humans. The authorities waste no time in dispatching guards to assault and kill any known demons. Though the issue holds a relationship much like in the inquisition days in the 18 century when many were falsely accused as witches only to be burned and tortured. This same relationship is found by those who accuse anyone as a demon when proven or not. The result of such accusation is capture and death.

Akira and Ryo upon visiting the Antarctic facilities, are also fused with demons. Akira with he demon Amon and Ryo with Satan. Akira though is able to keep a sense of his humanity in which he now calls himself Devilman. Devil man is good by nature very similar to the Mcfarlane created character of Spawn who fight against evil.

The current situation of the world doesn’t help with several instances of right and wrong being intertwined. In fact Japan is in pure chaos.

Devil man seems to hold a stronger persona that is able to transform partially or into full devil gear attacking demons who hold a lower ranking. This ability quickly makes his appearance almost a product of super hero films. It goes without saying that the inevitable confrontation will climax the film with Devil man battling Satan. Most films follow this format, so that shouldn’t be a surprise…the good news is it’s quite a visual treat! 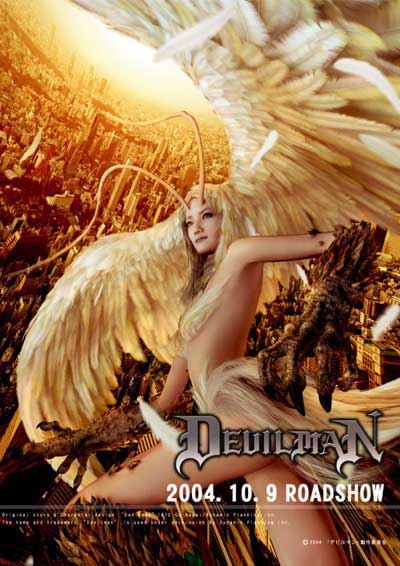 In short, an apocalyptic war has broken out in which paranoid humans battle against merged demons. Devil man has to confront his own feelings and how to make the right choices in these matters.

Even though the film has been bashed quite a bit, for a new comer the CGI effects are pretty spectacular. Monsters, demons and creatures emerge at every corner using strong CGI morphing combined with practical effects. The practical effects have a a certain Gwar quality but are in line with the stylings of many films of Asian horror extreme market. The film makers have alot of fun as demons emerge sporting appendages, tentacles and all sorts of demonic combinations. Devil man is the most impressive in his fully CGI transformation mixed with live action shots. 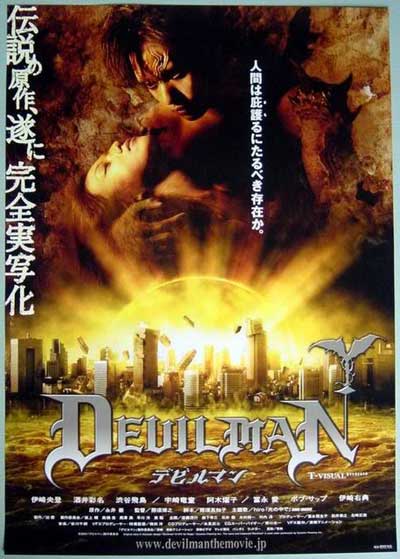 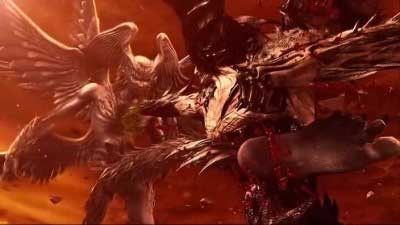 The film has actually been reviewed as one of the worst films in Japan. I believe this rooted in the Japanese discontent with the cartoon to film adaptation, though if you are coming into this as a new viewer I have to say I still really enjoyed it. After watching from a friends copy, I proceeded to order the DVD for my library. Acting is so-so, story has holes and is fragmented but it has a bunch of that “Constantine” style monster/demon battle moments that are the attraction for me. In summary, it just depends on what is entertaining to you and what annoys you. For me Devilman is a go ……I’d watch it several times again.