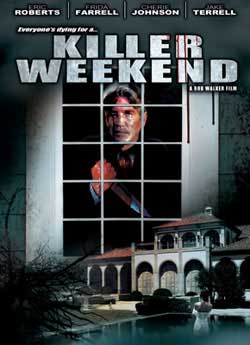 With her marriage to troubled businessman Mason (Eric Roberts) on the rocks, Linda (Jenna Zablocki) invites her sisters for a weekend party — not suspecting that her martial arts-loving husband plans to vent his frustrations by slicing and dicing them all. What should have been a few days of rest and relaxation turns into a frenzied fight for survival. Cherie Johnson and Frida Farrell co-star in this indie horror flick

Marriage is a lifelong commitment, that once the decision to be with someone the rest of your life, that binding contract is not only on paper but also harnesses a traditional submissive relationship between the husband and wife. Especially when the wife is not contributing anything of monetary value, her role in the marriage is looked down on due to not being the main source of income for the family. Unfortunately this is Linda’s(Jenna Zablocki)case in Rob Walker’s “Killer Weekend,” when her psychopathic wealthy husband Mason(Eric Roberts) finally loses his sanity and goes on a killing spree on what was supposed to be an enjoyable family weekend.

The film begins with Linda talking on the phone to her sister, Tracy(Frida Farrell) while Mason practices martial arts in the background. Linda confesses that she fears for her safety, and begs Tracy to come over as soon as she can to give emotional support to her and her son. At the dinner table, Mason ensues with his creepy demeanor as he makes them eat a dinner composed of seafood, to the other’s dismay. After a brutal encounter with the Hispanic gardener that leaves him maimed, he then goes after his own wife in the bathtub electrocuting her to death. The son is the only one that is left unharmed, and he tries in vain to stay away from his crazy father.

Unknowingly, Tracy still comes out to the mansion that Mason and Linda inhabits, along with her boyfriend Brian(Jake Terrell). They bring along friends in their close knit group: Bo(Moe Irvin), Renee(Cherie Johnson), and Christina(Christina Buenaventura). The friends are instantly impressed by the massiveness of the mansion, but Tracy is desperate to know the whereabouts of her sister, Linda. When Mason assures them that she isn’t feeling well, the friends get the party started as the make themselves at home at Mason’s lair. Linda and Tracey’s dimwitted sister Holly(Hollis McLachlen) also makes her way to the house, along with her friend Lucy(Katrin Teberg), and also fall for Mason’s lies about the whereabouts of Linda.
Renee becomes suspicious about Mason, as she starts to have premonitions of the friends being killed one by one brutally by the uncomfortably friendly husband of Linda. As her premonitions become reality, the group of friends must fight for their survival as they are picked off one by one by the supposedly trustworthy Mason. The ending is a faceoff between Mason and his deceased wife’s brave sister, who fights for her own life and that of her dead sister’s only son.

“Killer Weekend” is filled with bloody murders, as Mason freely slays the unsuspecting visitors to his home. He uses everything from samurai swords to a guillotine to kill his victims, and has compelling monologues that he bursts out into when he is using certain weapons. A particularly disturbing scene of the movie is when the friends are being served dinner by Mason, in which he speaks of cannibalism as they eat a beef stew made of the remains of bodies that Mason had already processed. The camera angles focus on each of the mouths of the visitors, as they enjoyed every morsel of Mason’s cooking. Unfortunately, the ending in Mason’s defeat is very easy for Tracy, and did not fit the story of the difficult battle against the psychotic murderer that all the other victims had.

With plenty of merciless killing by a deranged serial killer, Rob Walker’s “Killer Weekend” is a bloodbath of trusting young adults that are surprised to find out that their weekend of partying ends up in their untimely death. The ending is that of revenge, as the sister of the killer’s dead wife rises up and defeats the psychotic husband on a diabolic killing spree.