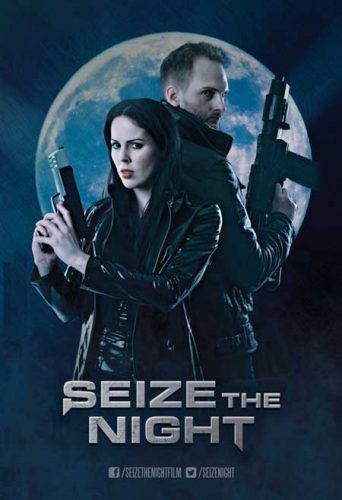 Renegade vampire assassin Eva has escaped from a secret bio-research compound. Hell bent on revenge she learns a terrible secret that may force her to unite with the devil she knows in order to defeat the greatest of all evils.

More short films! Today we have a short from the UK titled SEIZE THE NIGHT, directed and written by Emma Dark with Richard Humphries & Merlyn Roberts.

This is another one of those short films that feels like it’s the beginning of a larger story. Eva Harker (Emma Dark) has escaped from some sort of medical lab where humans are testing vaccines (or something, not sure) on supernatural creatures, specifically vampires and werewolves. Eva has no care for anything other than to get as far as possible from the nightmare, but it’s not that easy. The other creatures of the city implore her help to put an end to the torture of their kind. Reluctantly, she agrees to be a part of it.

You will recognize a lot of the people in this movie. Alumni of films like  COCKNEYS VS ZOMBIES, FROM HELL, and WRONG TURN 6 all show up as characters. It feels a bit like UNDERWORLD meets RESIDENT EVIL. And I really think there needs to more told of this story. Seriously….

Using my special short scale of one to five, five being awesome, I’m giving this film 4 supernatural issues.