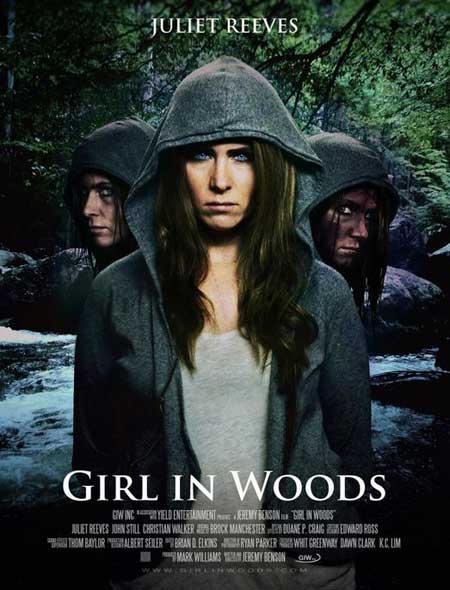 After a tragic accident Grace is lost and alone in the Smoky Mountains. Grace’s struggle for survival is made more complicated by her troubled past. Battling the demons in her mind may be the only way to come out alive.

If you spread out a collection of low budget horror movies in a given space, and you threw a rock into that space, there’s a good chance that the movie the rock lands on will take place in the woods. There are an uncountable number of low budget movies set in wooded areas. It’s an easy location to film in since it is less likely to require permits and there will be fewer distractions. Yet, there are drawbacks to the setting as well. The different locations in the woods all look similar yet distinct at the same time. It can take away from any visual stimulation. The success of a wooded setting depends on the individual movie.

Girl in Woods followed a woman named Grace (Juliet Reeves) who was on a vacation at a cabin with her significant other, Jim (Jeremy London). While Grace and Jim were out in the woods, Jim was shot in the head. Grace could not find her way back to the cabin and spent days walking through the woods, slowly turning feral, and avoiding a monster that was stalking through the woods. Spread throughout the movie were flashbacks and dreams involving Grace’s mom (Charisma Carpenter), dad (Lee Perkins), and grandfather (John Still).

As much as I gripe about movies being set in the woods, there was an important reason for this in Girl in Woods. That reason isn’t the title. The whole concept of the movie was that Grace was lost in the woods and slowly going insane. The location was a factor in her downward spiral. The audience was meant to sympathize with the main character and the location was one of the ways that the movie helped that connection. Having the visuals be confusingly similar, as any spot in a wooded area is, made the movie feel like being lost in the woods. That made the setting forgivable, though woods are generally used too much in low budget horror.

Low budget horror tends to also utilize small casts. In the case of Girl in Woods, most of the movie was spent with Grace. Juliet Reeves put in three performances as her character’s personality was split into three parts. She spent a large amount of time talking to herself in the woods. There were three distinct personalities that Reeves switched between. One of them was fairly good, while the other two were underwhelming. When she was playing helpless, it never quite worked. She made that side of the character a little too childish for the survival story to land. The same could be said for the devil on her shoulder side of her personality. You could see that she wanted to play this kind of character, and it was easy to notice how much fun she had in that role. It wasn’t convincing, though. Reeves was never believable as the darker side of the character. Where she excelled was the in between contemplative personality. It felt real and natural. There was some good in what Reeves was doing. The problem was that she couldn’t make two of the three personalities feel right. 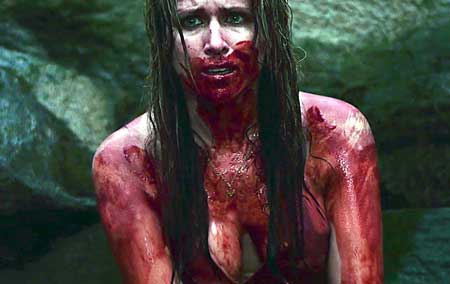 Girl in Woods was a mixed bag when it came to reveals toward the end. It was easy to see most of them coming. Hints were sprinkled throughout the movie. The problem was that they weren’t as impactful as they were meant to be. The reveals should have packed an emotional punch but ended up feeling like nothing. The story could have been better serviced if time was taken build emotional connections. If the characters or situation were fleshed out better, there would have been more investment. It would have made a huge difference.

I’ve said a lot of negative stuff about Girl in Woods. It wasn’t all bad. The movie was watchable. It just leaves no lasting impact. It was a movie and that’s all. Nothing about it will cause me to go back and rewatch it. I won’t be telling friends about the movie and recommending that they seek it out. But if there’s anything positive, it’s that I also won’t be telling people not to see it. There was a decent story that was weakened by setting, performances, and a lack of depth. Girl in Woods was fine. That’s all it was. Fine.