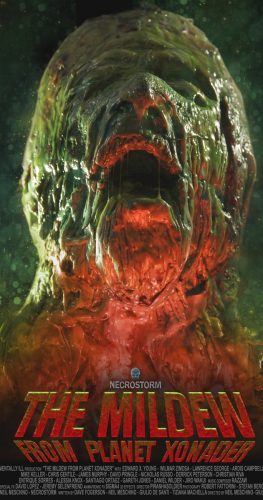 The year is 1984. Researchers at the secretive Bentan Labs are celebrating the completion of their latest weapons project: a previously unknown type of mildew, capable of spreading and consuming any kind of vegetation… and ideal for attacking stockpiles of enemy food. When a sponsor is accidentally infected, the mildew’s spores are set loose across the facility. As aggressive soldiers flood the complex and the infected staff begin to mutate, the survivors come to realize that the mildew is in fact an alien creature! To avoid an agonising death, the remaining scientists must join forces with “Toxic” – a mysterious mercenary who has infiltrated the building on a covert mission. Will anyone escape the clutches of this out of control fungus and the army of crazed mutants it has created? Body melts, alien mutations, tons of action and geysers of gore await you. The ’80s are back!

I’m not exactly sure how it happened but the name Necrostorm came across my computer screen. I had never heard the name before and had no clue as to what this company is. Upon further inspection, I learned they were a film production company with titles like ADAM CHAPLIN and HOTEL INFERNO. As I dug some more, I learned they’re a company devoted to delivering films with a retro feel, at least this is my impression thus far.

The film I was given to view was their most recent effort, THE MILDEW FROM PLANET XONADER. So the title is a bit of a mouthful but when you get your hands on the actual film and unleash it upon your senses, you’ll be filled with a heinous joy. Many of us are tickled by nostalgia, things we loved growing up. THE MILDEW isn’t inspired by any one particular film, it appears to be inspired by the idea of nostalgia. It draws inspiration from a type of film, things similar in style to BODY MELT or STREET TRASH, and this is so very welcome. These films were unique for various reason and this film is no exception. 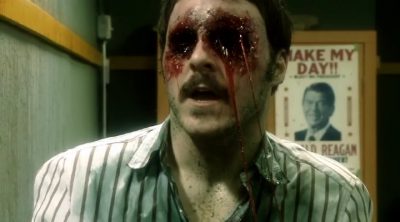 The year is 1984 and Bentan Labs have been hard at work developing a mildew, one that grows quickly and is quite deadly. When their tests prove successful it’s only a matter of time before some one wants to get their hands on it for use as a weapon. Along comes a politician with dreams of being a far more important leader. He somehow comes into contact with the mildew and becomes infected with some sort of disease caused by the spores within the mildew. This infection quickly engulfs him before more of the mildew is released into the atmosphere and everyone within the lab is now at risk. Soon, people are becoming infected causing people to mutate and melt, something has to be done and fast. There are only a few survivors and they will have to put aside all of their differences in order to come up with a plan to not only save themselves but to contain the mildew before it escapes.

Directors Guilio De Santi and Neil Meschino go to great lengths to make the experience of watching THE MILDEW feel authentic as possible. The experience I’m referring to is the one I had mentioned above, this isn’t just a homage to those type of films, it wants to be one of those films and it quite successfully does so. A few years back, imitation grind house films were flooding the market. They paid homage to the genre but we all knew they weren’t the real thing. With THE MILDEW, if you didn’t know any better, it could have been a VHS classic you would have searched for on a video store shelf. The mood is just right, it balances humor and gore on a very thin line, doing it very well. The performances from the cast are solid and served with a bit of cheese. The killer score by Razzaw captures the fantastic retro-synth wave music that was so prevalent during that particular era (it’s also making a welcome comeback). 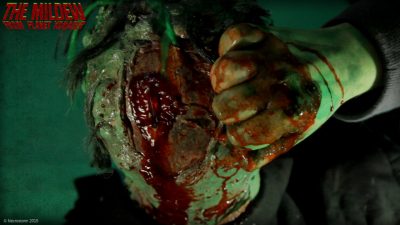 The bread and butter of THE MILDEW is in the brilliant effects work by Ferdinando Bazon, Mark Bedell, David Borg Lopez, and Sigma4. It’s nasty and gooey, bodies are dismembered, organs are torn out, people melt into slop, it’s a  smorgasburg of nastiness audiences will devour. It just needs to find the right group of people. Most folks won’t ever notice but I did catch a few moments where computer effects were used. Not my particular cup of tea but they’re most certainly few and far between a may take you out of the nostalgic ride, but only for a quick moment. Either way, those effects were still mixed with amazing practical work and it was exciting to see. 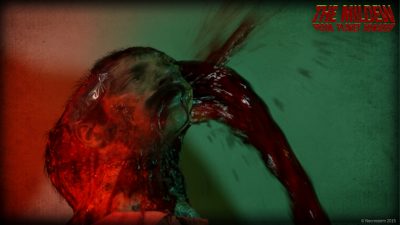 THE MILDEW FROM PLANET XONADER is a blast from start to finish and a brilliant throwback to the body melting of yesteryear.
****1/2 (out of 5) 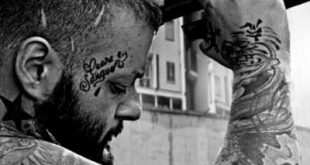